An Edmonton man is on his way home after a one-on-one meeting with Prime Minister Justin Trudeau.

'It's kind of what I expected, but it's not what I hoped' 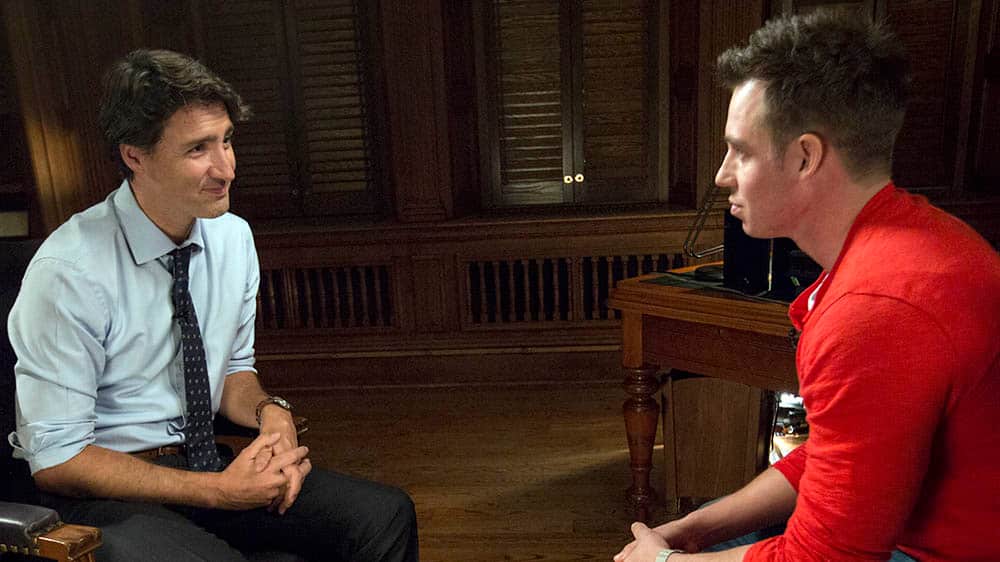 Face to Face with the Prime Minister - The interview: The future of Alberta

5 years ago
11:54
Danny Strilchuk, a 30-year-old oil field worker from Edmonton, asks Justin Trudeau if there is anything to give him hope or the future in Alberta and how he will generate jobs 11:54

An Edmonton man is on his way home after a one-on-one meeting with Prime Minister Justin Trudeau.

Danny Strilchuk was one of 10 Canadians handpicked to take part in a face-to-face interview with Trudeau, in which each participant was invited to ask the questions that mattered to them.

For Strilchuk, a third-generation oil and gas worker who has only worked a few days in the past month, a main concern was the lack of jobs in the oilfield.

"For myself, I'm lucky to work one week out of the month at a reduced rate, and I'm probably one of the lucky ones," he told Trudeau.

"I'm scared and concerned about the future and I want to know what your plan is to save the oilfield."

Trudeau told Strilchuk he had heard from many others who shared his worries over where the next paycheque would come from. Citing the recent drop in oil prices, Trudeau said he knew many in the prairies and Newfoundland were going through a tough time.

"The country's going to be there for you," he told Strilchuk. "I want you to know that we are very, very aware of what's going on."

"But how does that look then?" Strilchuk quickly responded.

"That means investing in the kinds of things that are going to make a difference," Trudeau answered.

"We can't change oil prices right now, but the one thing that I'm extremely confident about is Albertans have always been incredibly resourceful and innovative. You've made it through tough times before and we're going to be partners with you through these tough times."

'If you were me right now, what would you do?'

From there, the two moved on to discuss some of the other employment options available to Albertans looking for work. Trudeau said some may be able to find work in municipal projects, but acknowledged there won't be enough jobs for everyone, and most would mean a pay cut for people accustomed to higher-paying oil and gas jobs.

Diversification of Alberta's industrial and employment sectors will be key to weathering the wait for oil prices to recover, Trudeau said.

"We're about to put forward a budget that's going to have concrete measures to invest in Alberta, invest in places where there are real challenges to help you through this tough time, because we're going to need you for the long term."

I've had this job for 10 weeks, the previous guys had 10 years and didn't get it done.- Trudeau on when ground will break on proposed pipeline projects

Strilchuk followed up Trudeau's comments with questions about Alberta's equalization payments, as well as the future of the pipelines servicing Alberta. When asked when ground may break on any of the projects, Trudeau replied: "I've had this job for 10 weeks, the previous guys had 10 years and didn't get it done.

"So I'm coming at it with a different perspective that says 'You know what? Maybe we need to build public trust. Maybe we need do these properly and show that we're not just focused on getting these built quickly.' "

"I just don't know where that leaves me. If you were me right now, what would you do? Would you stay in the oilfield or would you look for something else?"

Speaking Monday, Strilchuk said he was frustrated that Trudeau wasn't able to give more concrete answers to many of his questions, but instead relied on what sounded like echoes of previous statements and speeches he's given to the public.

"It seems that he doesn't really have a concrete plan of what's going to happen," Strilchuk said. "He said, 'just hang in there.'

"I'm not sure that he has a real plan to help anybody out in the short term."

While he did appreciate Trudeau's candor when it came to acknowledging there might not be jobs for everyone right away, Strilchuk said he wanted to have more of a "person-to-person conversation, not a person-to-politician conversation."

"It's kind of what I expected, but it's not what I hoped."

I'm not sure that he has a real plan to help anybody out in the short term.- Albertan Danny Strilchuk looks back on his conversation with Trudeau

However, he doesn't have any regrets about going.

"It was a once-in-a-lifetime experience and something I'll never forget."

Since the special aired on Sunday night, Strilchuk said he's received a lot of support from his friends, family and online.

"I've never been this popular on social media in my life," he said with a chuckle.

While he waits to see what Ottawa has planned for Alberta, Strilchuk has signed up for night school and online courses at NAIT.

"I'm not sure what the future is going to hold — I'm just trying to stay ahead a little bit that way."

Trudeau will be in Alberta to meet with Premier Rachel Notley on Wednesday.