Travis Vader and the McCanns: 6 years to a decision | CBC News Loaded
Edmonton·Timeline

Travis Vader and the McCanns: 6 years to a decision

Lyle and Marie McCann were last seen alive on a surveillance video captured at a St. Albert, Alta. gas bar more than six years ago. Here's what's happened since then.

Days and years: The long road to the Vader verdict

6 years ago
Duration 2:13
Travis Vader faces first-degree murder charges in the deaths of Lyle and Marie McCann. Six years after the couple was last seen, Judge Denny Thomas will declare a verdict on the morning of Sept. 15.

Lyle and Marie McCann were last seen alive on a surveillance video captured at a St. Albert, Alta. gas bar.

That was six years, two months and 12 days ago.

Here's how the case has progressed since then:

July 5: Around 7 p.m., firefighters respond to a call about a motorhome fire at the Minnow Lake campground near Edson, Alta. No bodies are found inside, but police discover the registration linking the RV to the McCanns. The SUV is not at the scene. Mounties phone the McCann home and officers later knock on the door but find nobody at the house.

July 10: The McCanns are scheduled to meet their daughter, Trudy Holder, at the Abbotsford, B.C., airport, but never show up. Holder calls the RCMP. The Mounties begin an investigation into the couple's disappearance.

July 12: RCMP confirm the July 5 discovery of the McCanns' motorhome at Minnow Lake. Police return to the site to search for evidence.

July 13: Diana Bjorklund and her father, Evert, go to the RCMP detachment in Prince George, B.C., to report having seen a vehicle on July 8 that matched the description of the McCann SUV. Bjorklund later tells CBC Radio that the RCMP weren't interested when they reported the information.

That same day, their son Bret McCann spoke at a news conference. "We know you're out there, you may be hurt, but we're looking as hard as we can."

July 14: The Mounties put out a media release asking the Bjorklunds to return to the detachment for a followup interview.

July 16: RCMP in Alberta find the SUV and say they are looking for a specific "person of interest." Police seek public help in finding Travis Edward Vader, then 38, of no fixed address.

July 19: Vader is arrested at a home near Niton Junction, Alta., on outstanding warrants not tied to the McCanns' case. A second man, whose name police did not release, is also arrested at the scene.

July 20: The court grants the request of Vader's lawyer, Brad Thomlinson, to officially withdraw from all matters relating to Vader. Thomlinson tells the court he had not been able to reach his client since Vader missed a trial date in June. The second man arrested the previous day is released without any charges.

July 27: Vader's sister, Bobbi-Jo Vader, tells reporters that Vader was "tired" and "sick" when he appeared at her family's home on July 4, a day after the McCanns were last seen. However, she says she does not think her brother was involved in the couple's disappearance.

Aug. 16: The family of Lyle and Marie McCann holds a news conference to announce they are raising money for a reward for information in the case.

Aug. 31: The RCMP say Vader is officially considered a suspect in the case, but no charges have been laid.

Oct. 19: The McCann family begins posting pictures of the missing couple on billboards along Highway 16, west of Edmonton. A $60,000 Crimestoppers reward is offered for information on the case.

July 3: On the one-year anniversary of the date Lyle and Marie McCann were last seen, the RCMP say they have found no signs of the missing couple.

July 27: A court order declaring the Alberta couple dead is granted so the family can begin processing wills and dealing with the estate. A letter from the RCMP said it is believe the couple was killed on July 3, the day they were last seen.

July 30: Family members of the missing couple hold a memorial service. Mourners were handed envelopes with rose petals inside and were asked to deposit them in an urn that is being buried in a cemetery plot reserved for the couple.

Feb. 15: Vader, a suspect in the disappearance of the couple, is denied bail on a number of charges that are not connected to the McCann case.

April 23: The RCMP charge Vader with two counts of first-degree murder in the deaths of Lyle and Marie McCann.

Oct. 19: Vader is convicted of offences that include drug trafficking, theft and weapons charges. But before he is sentenced, it's discovered that some evidence was not properly disclosed to the defence. The judge cites the RCMP as "negligent" and orders a new trial.

Feb 13: Vader files a lawsuit against RCMP, accusing them of carrying out a fraudulent scheme to keep him in custody until he could be charged in the McCanns' deaths. In the suit, Vader says police used another man to supply a fraudulent letter of employment to Vader's lawyer knowing that his lawyer would use that letter in court. After the letter was entered into court, RCMP charged Vader with obstruction of justice and uttering a forged document. The charges were later dropped.

March 19: The murder charges against Vader are stayed by the Crown, which has one year to reactivate them.

April 24: Vader launches a $1-million wrongful-prosecution lawsuit against RCMP officers, Crown prosecutors and jail guards, alleging a detailed history of legal and physical abuse that began within days of the McCanns' disappearance.

Oct. 8: Travis Vader is found not guilty of all nine theft, drug and firearm charges that kept him behind bars. He tells reporters the RCMP "destroyed my life." His lawyer, Nathan Whitling, says of Vader's four-year confinement: "I think it's unfortunate he had to spend so much time in pretrial detention only to be acquitted of everything at the end of the day."

Travis Vader on being freed: RAW

8 years ago
Duration 3:16
Travis Vader was released from custody Wednesday night after 4 years behind bars

Dec. 20: The first-degree murder charges against Vader are reactivated and he is taken into police custody. He is later released on bail.

Nov. 30: A week-long abuse-of-process hearing challenging the actions of the RCMP and Crown prosecutors in the Vader case begins in Edmonton. Speaking at the hearing, Edmonton's chief Crown prosecutor testified she had lost all confidence in the RCMP's ability to turn over evidence. Vader's lawyer Brian Beresh requests the proceeding against Vader are stayed.

Dec. 15: Details of forensic exams on the McCanns' motor home and SUV are released when a publication ban is lifted in Court of Queen's Bench. The documents allege Vader used the McCanns' cellphone on the afternoon of their disappearance, and that forensic evidence ties Vader to the couple's SUV.

Jan. 12: New documents file indicate the case against Vader is partly based on evidence from a jail-house informant paid by the RCMP.

Jan. 26: Judge Denny Thomas rejects Vader's request for a stay of proceedings, noting "Mr. Vader's long and interrupted march to the courtroom is troubling. However, given the seriousness of the charges and the shared interests of Mr. Vader and the public in his very public name being cleared, align to favour a full adjudication of the charges against him. All of that said, this is a very close call." A court date is set.

6 years ago
Duration 0:31
Travis Vader and his legal team entered an Edmonton courthouse Tuesday morning. Vader faces two counts of first-degree murder in the deaths of Lyle and Marie McCann.

6 years ago
Duration 1:29
As the trial of the murder of Lyle and Marie McCann comes to a close, Travis Vader tells Janice Johnston how he feels about his treatment by the police.

July 7: Members of the McCann family gather to take down the "Missing" billboard of Lyle and Marie McCann that had been posted along Highway 16 six years earlier. 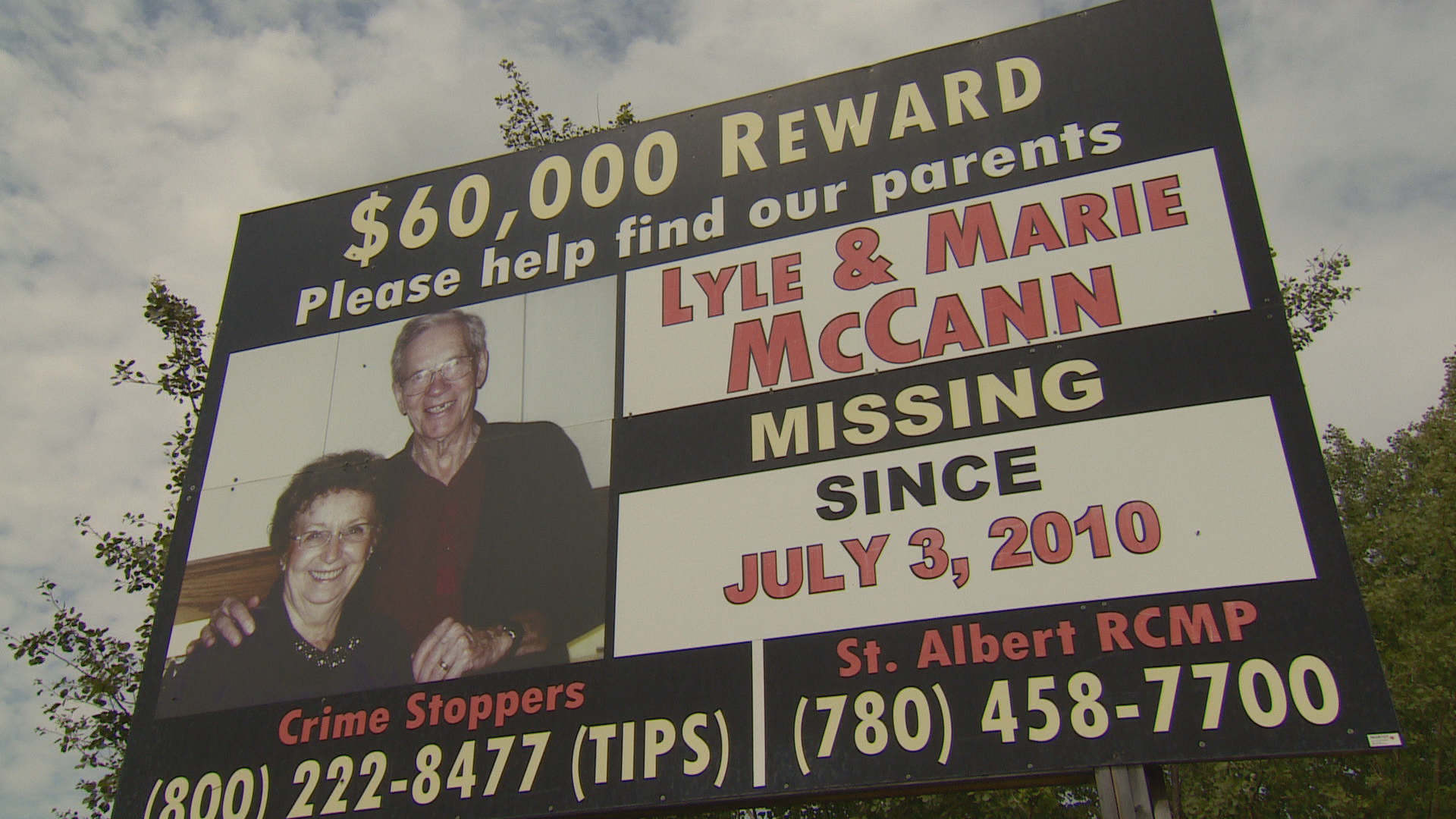 6 years ago
Duration 1:54
Six years after they went missing, the family of Lyle and Marie McCann are 'closing a chapter' by taking down their billboard.

Sept. 13: Justice Denny rules that cameras will be allowed in the courtroom when the Vader decision is delivered — a first in Alberta.