Owners of units in a newly-built west Edmonton townhouse complex say they are frustrated by water leaking into their homes.

"You intentionally buy a new home thinking, 'I'm not going to have to deal with anything for five years' " 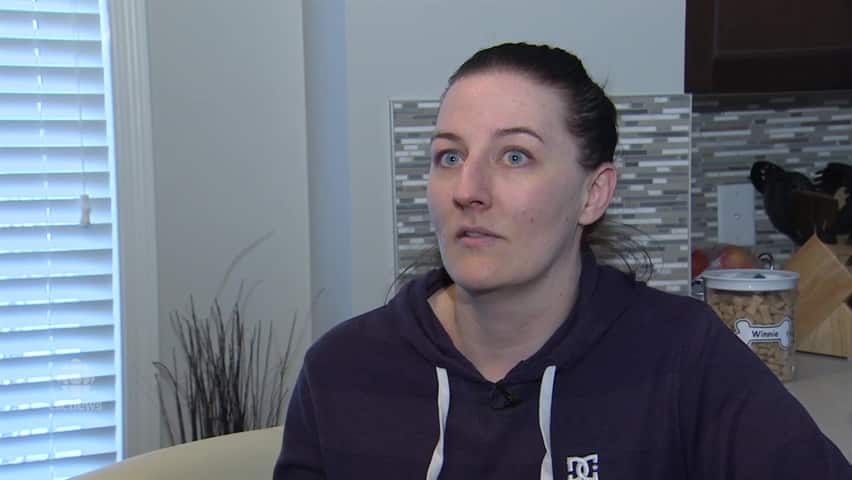 ‘It’s a bigger issue that they’re not taking seriously’

4 years ago
1:32
Homeowner Brandi Sadler is worried about health issues from water leaking in her home, which was built by Brookfield Residential. The builder says humidity issues could be to blame. 1:32

Owners of units in a newly-built west Edmonton townhouse complex say they are frustrated by water leaking into their homes.

"You intentionally buy a new home thinking, 'I'm not going to have to deal with anything for five years, nothing major like paint or an electrical thing that's not working'," said Brandi Sadler, who moved into the unit at Novus Townhomes in the Glastonbury neighbourhood in September 2015.

Last December, Sadler noticed paint on the walls of the upstairs bedrooms was bubbling and water was leaking through the bathroom ceiling fan and staining the drywall.

"We're basically having pockets of water in the paint in some of the corners of the home," said Sadler. "There's staining on the outside of the siding that's being dripped from a lack of kickout flashing."

Kickout flashing diverts rainwater away from the siding of a house and into a gutter.

I fear for my health and my family's health- Luis Ferraz

"That's what we're worried about. Now that water has come in, what's behind those walls?"

Next door to Sadler's townhouse, Luis Ferraz lives in a duplex with his wife and 10-month-old son.

The home was a good fit for his new family, and a friend recommended the developer, Brookfield Residential.

But after moving in he noticed water was leaking into his two-floor unit leaving stains on the ceiling of his first-floor kitchen.

He worries the water leaks may eventually lead to mould.

"I fear for my health and my family's health, especially my young son."

He suspects the water is coming from the attic.

He says a representative from Brookfield told him it might be that the humidity levels in his home are too high, but they are inspecting his home.

An inspector takes a look

Last week, CBC brought in Michel Bourgeois, an inspector with 22 years experience and the owner of Pillar to Post Inspectors, to assess Sadler's home.

While he did not find any water in the walls or ceiling on the cold winter day, he says he saw issues that could lead to water in the attic on day of melting temperatures.

"Due to the architectural designs, there could have been a little more thought and process in how to ensure that the water is properly shed away from the building envelope," Bourgeois said.

"If you have an ongoing water-related issue, we are definitely going to find in time that the source of mould could occur — definitely could occur — as well as some rot and bigger problems."

"We do actually have to address the water coming into the ceiling, for sure," she said.

"We've had some pretty wacky weather this weather and there are some issues with attic condensation."

When asked if proper ventilation in the attic would prevent condensation from leaking into the ceiling of the townhouses, Jabusch offered tips on how the homeowner can reduce humidity in their home during the winter.

"In the late fall, it's a great time to reduce your humidity levels in the house. Kick your humidifier back a little bit before the really cold weather hits.

If we did something that wasn't correct at the beginning, we will correct it- Wendy Jabusch

Jabusch added that the company is committed to fixing the leaks and repairing the damages.

"We can understand how frustrating that is for our customers, but it does take some time to get to the root cause of what the issue is and once we find out, we will absolutely make a plan and get the repair done."

Owners were worried that Brookfield would not take responsibility for issues arising from the leaks two years after the sale, but Jabusch says that's not the case.

"If we did something that wasn't correct at the beginning, we will correct it," she said.

Both homeowners say they'll be happy as long as Brookfield Residential can give them a permanent solution that won't lead to multiple repairs.

Neither Sadler nor Ferraz paid for a third-party inspector at the time of sale, but both said they would get one for a new home purchase in the future.