The sale of lawn darts was set to be the target of a ban in Canada in July 1989, but some retailers aimed at pulling them from shelves sooner.

Lawn darts were banned by July 1989; caused at least 55 serious injuries in Canada 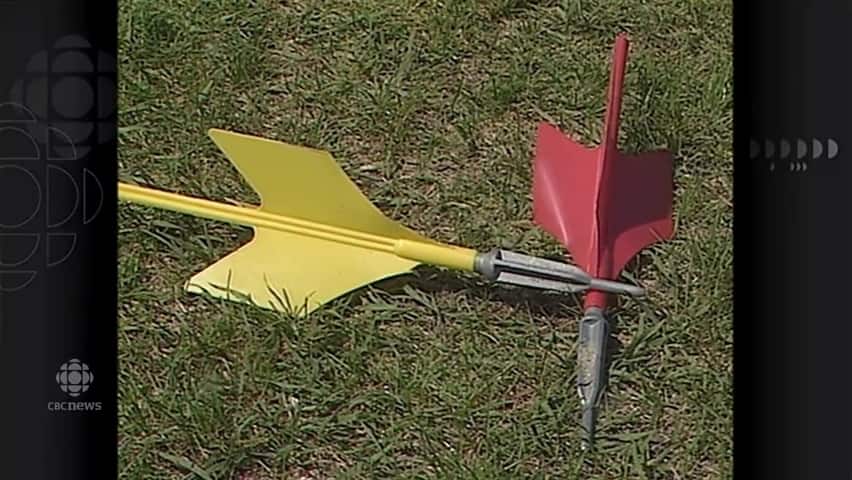 From The Archives: Lawn darts get tossed from store shelves

4 years agoVideo
1:27
On June 13, 1989, Canadian Tire stores start taking lawn darts off the shelves ahead of the nationwide sales ban. 1:27

The sale of lawn darts was set to be the target of a ban in Canada in July 1989, but some retailers aimed at pulling them from shelves sooner.

Canadian Tire stores across the country took the popular game off the shelves before a sales ban under the Canada Consumer Product Safety Act took effect.

Edmonton emergency physician Dr. Louis Francescutti had advocated for the ban and explained the danger of the darts.

"The only places that it can penetrate is either through the orbits — the eyes — or on the side of the skull," Francescutti said.

In Canada at least 55 serious injuries resulted from lawn darts. Three children were killed in the United States.

The Canadian ban only prohibited the sale and import of lawn darts. It didn't stop people from using the sets they already had.

Many lawn dart sets remained in circulation for years which prompted police organizations across the country to warn about buying and selling them at garage sales.

In the video, the CBC's Lynda Steele reports on the dangers of the game as lawn darts were being taken off shelves at the beginning of the summer.