The messy work of grassroots democracy, complete with bright cardboard signs, was on display outside the Thorhild County office on Thursday, where about 50 people rallied to support three elected officials dismissed by the province.

'It seems to have reached a boiling point here,' says Kathleen Bruce, who organized Thursday's rally

The messy work of grassroots democracy, complete with bright cardboard signs, was on display outside the Thorhild County office on Thursday, where about 50 people rallied to support three elected officials dismissed by the province.

Kathleen Bruce helped organize the event, held the day before arguments about the case will be heard in court.

She said the residents who showed up disagree with the findings of a 62-page inspection report that outlined several examples of "irregular, improper and improvident" behaviour by the county council. 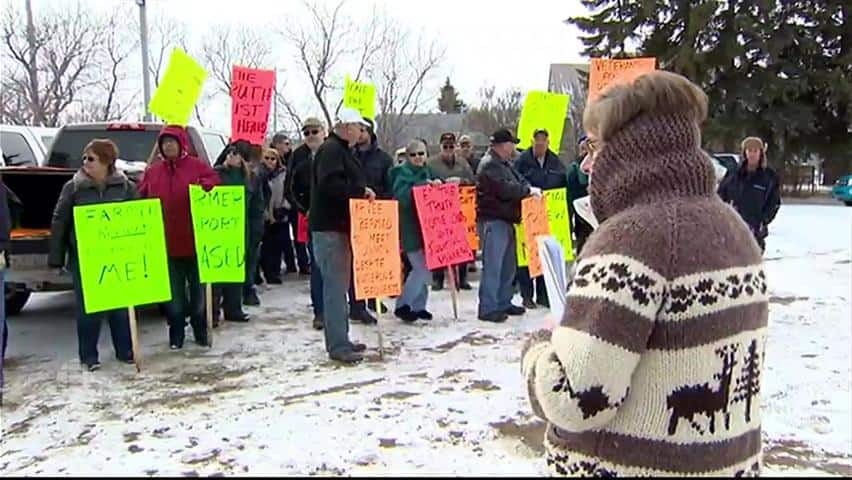 5 years ago
1:22
Min Dhariwal explains how some council members were removed from office and protesters are both for and against the decision. 1:22

Bruce and many of her neighbours say they believe the province had no business interfering with county business.

"It seems to have reached a boiling point here," Bruce said. "Certainly, when you start having the province step in and councillors being removed, people who duly elected them and who attend the council meetings, and are aware of what's going on, have said enough is enough.

"We want to tell our side of the story."

Bruce and others say the other side of the story is that the independent report included inaccuracies and was biased against the three council members removed from office.

'This has been going on for years'

Those who attended the rally hope Friday's judicial review in Court of Queen's Bench will overturn the minister's actions.

Harry Tomniuk, who lives in nearby Weasel Creek, said people are angry that three county officials elected by the people have been dismissed by the far-off authorities in the Alberta legislature.

"If they wanted to dismiss them, that's fine," Tomniuk said. "Let them dismiss everybody. Because this has been going on for years and years, this feud with different people."

Tomniuk said he, too, hopes the judicial review will overturn the minister's decision and the fired officials will be reinstated.

"I feel they should have run their term," he said. "And the people should decide in democracy. If the people figure they're wrong, they'll throw them out."

The day after she dismissed the council members, a temporary injunction was granted that stayed the ministerial order and allowed the three councillors to return to work.

Larivee's press secretary pointed out on Wednesday that the inspection report  was sparked by a petition signed by 776 people who asked the minister for an inquiry into both council and its chief administrative officer.

The report highlighted several concerns. Among them: that the chief administration officer hired by council had personal ties with two councillors, and lacked the required experience. The report also revealed that councillors who were unhappy with news coverage by the Redwater Review awarded the county's contract to a Westlock newspaper at an additional cost of $58,000.

Vivian Prodaniuk did not attend the rally but showed up to watch.

She said she supports the minister's actions.

"They are not a functional council," she said. "They're not getting anywhere."

Prodaniuk said she hopes the judicial review upholds Larivee's decision and leads to a byelection that can bring new voices to council. She thinks a majority of county residents agree with her.
CBC's Journalistic Standards and Practices|About CBC News