The anxiety of evacuees stranded north of fire-ravaged Fort McMurray is spilling over onto Highway 63.

'It’s getting a little heated out here,' says oilsands worker trying to get through to Fort McMurray 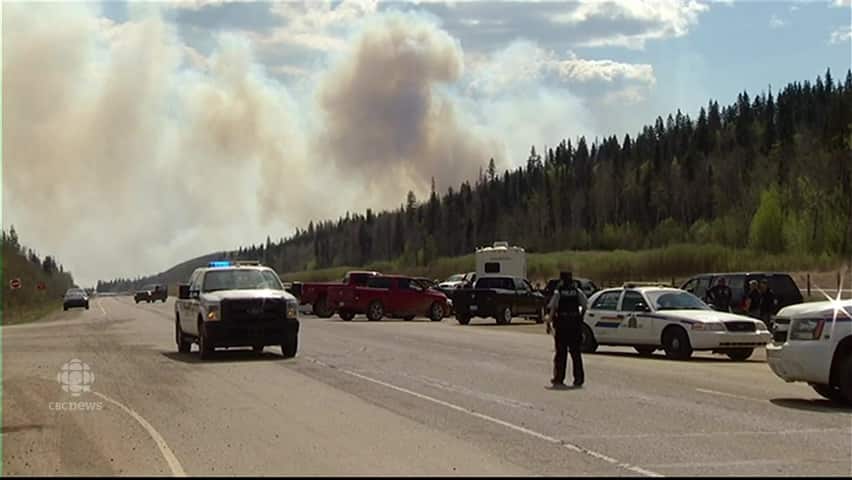 4 years ago
0:43
Frustrated people continue to wait at the blockade north of Fort McMurray due to wildfires. 0:43

Frustration of evacuees stranded north of fire-ravaged Fort McMurray is spilling over onto Highway 63.

Thousands of vehicles lined up Wednesday at a blockade established at the perimeter of the evacuation zone on the north city limits.

All roads into the fire-ravaged city are closed, but residents and workers are desperate to get through.

"There are about 15 kilometres worth of vehicles just sitting here, waiting to leave," said Alex Ve Soto, a Syncrude worker who had been waiting in the line for more than seven hours as of mid-afternoon on Thursday.

"We're kind of at a standstill. We're just going to wait it out, but it's not looking too good. Every now and then, you'll hear a whole bunch of people honking their horns and scream and yell. It's getting a little heated out here."

Shortly after noon on Thursday the situation grew tense as a group of vehicles charged the RCMP barricades, Ve Soto said.

"A group of about 25 to 30 vehicles made a push for the road, and one of the police officers jumped in front of his car so no one would ram it out of the way," he said.

"I was just in awe of what was happening."

Ve Soto says the aggressive drivers were not charged or arrested and police have stopped threatening to fine drivers for waiting in line.

"They're just trying to calm everyone down right now, to make sure it doesn't get out of hand because it could very quickly," said Vesoto.

"There is only about eight police officers out here. That's all there is, and there has got to be at least 10,000 people out on this highway."

RCMP Sgt. Jack Poitras had not heard of any major issues at the north blockade, but says he had heard reports of drivers trying to sneak past a set of barricades near Conklin to get back into Fort McMurray.

"We have more roadblocks up ahead, but we just catch them up further. But we're still under evacuation order so they end up getting turned around anyway."

About 25,000 evacuees have been stranded north of the city since Monday's evacuation. Ve Soto is among hundreds more oil sands workers who were also hemmed in by the blaze.

Getting people who are stuck north of the city out of the work camp evacuation centres is a priority for the province, said Premier Rachel Notley Thursday.

"Our focus right now is on getting those people south as quickly as possible," Notley said.

She indicated that the province is working with industry to evacuate as many people as possible by air in the coming days, and emergency officials are "doing everything they can to open the highway."

"They say they're flying people out. But the wait list, there is about 4,000 people on the waiting list for that." said Ve Soto.

"There is only one way out for us. If you go north, there's only ice roads, and you can't go east or west.

"We're kind of the middle of it, and we'd rather just be home."