Moved by the stories of loss and pain in Fort McMurray, Syrian refugee families in Edmonton have been raising money to help support them. Many have only been here for a couple of months, but say they want to give back after feeling so welcomed in Canada.

“I know the pain,” said Morhaf Aldiri, who is leading the fundraising campaign 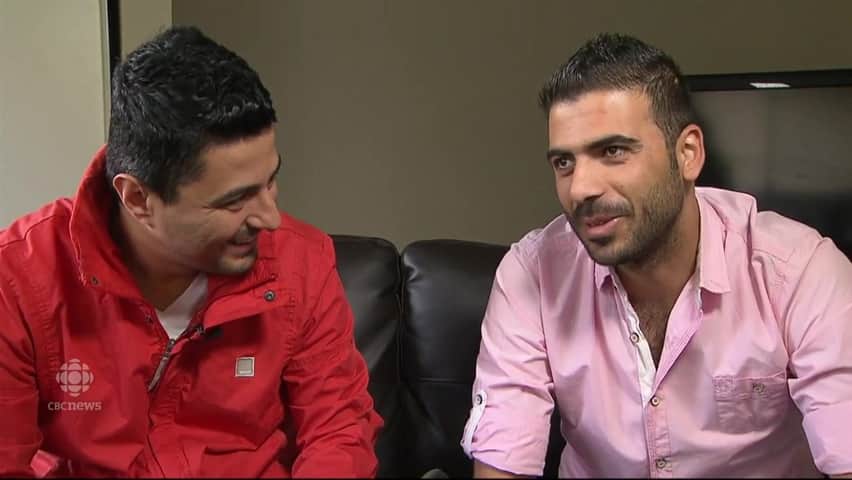 5 years ago
2:11
Morhaf Aldiri is calling on other Syrian refugees in Edmonton to fund a dinner for Fort McMurray evacuees. 2:11

Syrian refugees living in Canada for a matter of months are among those raising funds to support victims of the Fort McMurray fire.

Morhaf Aldiri, who arrived in Edmonton in February, said Albertans have been so kind to him that he simply had to do something to give back.

"When I came it was very difficult," said Aldiri. "Another country, I don't know anything, any people, but lots of people help and help me, so it's very nice."

He and his family had to run for their lives when their house was hit by a bomb in their home city of Daraa, Syria, in 2013.

He then spent time living in a refugee camp in Jordan, alongside thousands of others, before coming to Canada.

"I know the pain that the Fort McMurray people feel," he said through a translator. "I lost my home as well in Syria, and it really touched me."

He added many Syrian families feel the same way.

There are about 20 other refugee families in Aldiri's new neighbourhood in northwest Edmonton.

When he talked to them about how they could support people affected by the fires, they came up with the idea of raising money to pay for a special meal for evacuees.

Aldiri then went around Edmonton collecting donations from other Syrian families.

"All the Syrian refugees, they want to return the favour" after so many Canadians have helped them, said Aldiri.

About 60 families have donated to the cause, raising a total of about $3,500.

The money is going to pay for a traditional Syrian lunch or dinner for evacuees. Aldiri is now working with the city of Edmonton to figure out a date, time and venue.

He's also getting help from James Gulseth, an Edmontonian he met when he first arrived in Canada.

Gulseth was volunteering with refugee families when he was struck by Aldiri's smile and friendly demeanour.

While language was a barrier, the two first communicated using Google translate and hit it off immediately. They are now the best of friends.

Gulseth said Aldiri called him late one night to tell him about the plan to help Fort McMurray evacuees.

"It's outstanding," said Gulseth. "I was talking to a couple of people yesterday and they actually started to cry, because it's just so nice and it's incredible what he's done."

Aldiri said he hopes his project will be a morale boost for people.

"I hope it makes the people of Fort McMurray happy," said Aldiri, adding he hopes it sends a message to evacuees that others care about the situation they are in.

As for Aldiri, he's still getting used to life in Edmonton and taking English classes to improve his language skills.

Although he says he might want to return to Syria at some point, at the moment he's grateful building his life in a country where he finally feels safe.