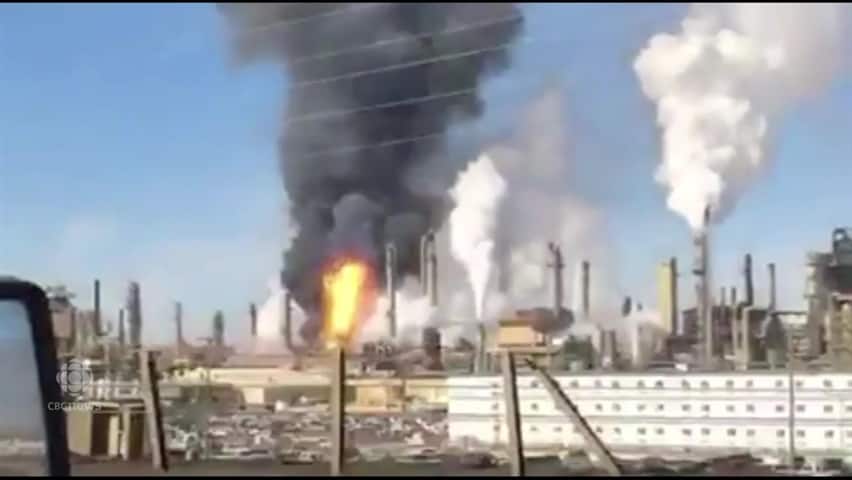 4 years ago
0:20
Pete Potipcoe posted this video on Facebook of a fire burning at Syncrude's Mildred Lake oilsands upgrader. 0:20

Alberta Health Services said one person was transported from the plant to the city's Northern Lights Regional Health Centre in serious but stable condition.

Syncrude issued a statement at about 6:15 p.m. MT saying the company's emergency services and operations workers had isolated and controlled the fire.

The fire has been isolated/controlled. All Syncrude personnel &amp; contractors are to report for their night shift as per usual. <a href="https://twitter.com/hashtag/ymm?src=hash">#ymm</a>

"All non-essential employees and contractors have been removed from the immediate area to allow response crews to manage the situation," the company statement said. "The appropriate regulators have been notified."

Wood Buffalo RCMP and other emergency services were on the scene, and Alberta Energy Regulator investigators had been dispatched to the site.

Police said in a news release they were unable to confirm the cause of the explosion.

Just before 4 p.m., Gibson said he could no longer see smoke, but he could not confirm that the fire had been extinguished.

"From my vantage point on site, everything appears normal," he said. "There's nothing amiss. But I'm not in a position or vantage point to say the fire is contained or extinguished."

A subcontractor who was working at the plant on Tuesday said he had left the affected area about five minutes before the fire started.

The worker, who asked to remain anonymous because he was worried about his job, said he heard distress calls over the radio.

"Then all of a sudden, buddy just started screaming, 'It's too late. Hit the horn, it's on fire,'" the man said.

Then the evacuation alarm sounded, he said.

"There was just a bunch of black smoke. And then everyone evacuated and there was a lot of pops. And the ground was shaking."

'It is still an active fire'

Alberta Occupational Health and Safety officers were not on scene as of 5 p.m.

"OHS is aware of the fire but our officers are not on the site right now because it is still an active fire," said Trent Bancarz, a spokesperson for Alberta Labour. "It's the first responder people who are there right now."

RCMP said they had shut down one southbound lane of traffic on Highway 63, the main road that connects the oilsands site with Fort McMurray.

Police said they assisted with the evacuation of non-essential services from the site.

We are currently responding to a fire at its Mildred Lake Upgrader north of Fort McMurray. Details will be shared as they become available.

Melissa Blake, mayor of the Regional Municipality of Wood Buffalo, told CBC News that Tuesday's fire likely had  many residents thinking back to last May, when a massive wildfire forced more than 90,000 people from their homes.

"On the outside, looking at social media, the videos that are being posted, people immediately think (about) who they know that's there," Blake said. "And I think the anxiety comes from just not knowing what all the answers are at this point."

'We'll get through this together'

As the first news about the fire spread, emergency responders had similar concerns to the ones they faced back in May 2016, Blake said, to make sure "the right personnel are in the right place at the right time."

"The better information that we're able to get out to the public, the more meaningful the reactions can be, but at this point we don't have details," she said about an hour after the fire started. "We're going to get this sorted out. We'll get through it together, as we did with the [May 2016] fire."

Alberta emergency services issued a health advisory Tuesday for residents in the Fort McKay area, about 60 kilometres north of Fort McMurray, saying their small community was in the path of smoke from the Syncrude fire.

Residents were advised to stay indoors and keep outdoor activity to a minimum, to keep doors and windows closed and use air purifiers if possible.

A fire at the company's Mildred Lake Base plant in August 2015 was quickly extinguished, and the company said at the time there were no reports of injuries.

My thoughts and prayers are with everyone at, or near Syncrude today. Stay forever <a href="https://twitter.com/hashtag/YMMStrong?src=hash">#YMMStrong</a>. Again, stay Safe. Resilient. Together.