A century-old home built by the pioneering grandparents of former Alberta premier Ed Stelmach will soon be on display at the Ukrainian Cultural Heritage Village east of Edmonton.

'It will inform, educate Albertans about the struggles ... the early pioneers faced'

A century-old home built by the pioneering grandparents of former Alberta premier Ed Stelmach will soon be on display at the Ukrainian Cultural Heritage Village east of Edmonton.

Four years ago, the home was moved 50 kilometres from the Stelmach family homestead near the village of Andrew to the museum, where it will serve as an interpretive centre.

After years of loving restoration, a ribbon cutting and a blessing of the Stelmach House Learning Centre will take place at the open-air museum this weekend. The event is a sneak peek at the building, which will become a regular public exhibit at the museum in 2017.

Stelmach said he's "incredibly proud" that the home will now be a permanent addition to the museum.

"All of our family is very proud that the house my grandparents worked so hard to build will be on display," Stelmach said of the restored home.

"To the family, it represents the courage that Nykola and Dora had to leave Ukraine with virtually nothing to build a new life in Canada, and for this we are very thankful."

Stelmach's grandparents were among the first wave of Ukrainian immigrants to Canada, arriving in 1898.

They spent their first few years on the farm living in a temporary sod house. They raised cattle and fowl, sold cream, wheat and eggs, and cleared the land.

And after a few years, construction on the log home began.

Built in 1915, the two-storey log structure includes a kitchen, an expansive dining room and a towering hand-carved staircase, leading to three bedrooms on the upper floor — ornate and spacious construction for the day.

Stelmach said restoring the homestead to its former glory, and its relocation, took years of careful planning, craftsmanship and a fleet of heavy equipment, 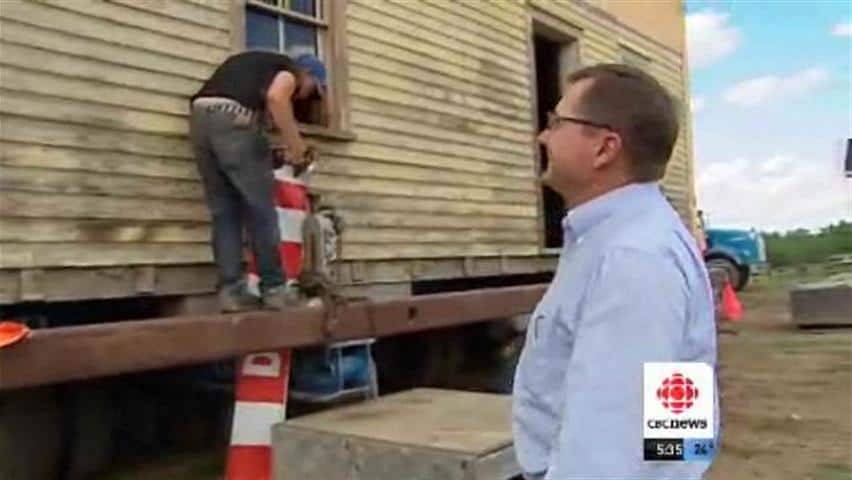 9 years ago
2:07
The former premier donated his grandparents' home to the Ukrainian Cultural Heritage Village 2:07

Before it reached the museum in August 2012, the house was bound together and tarped, hoisted off its foundations, and lifted onto the back of a truck.

At the museum, rotting logs and boards were removed and reconstructed and the original hardwood floors were fully restored.

"That all had to be hand-sanded and polished, all that old paint and wallpaper had to be removed to get right down to the original plaster," Stelmach said during a Tuesday afternoon interview on CBC Edmonton's Radio Active.

"And a group had some fun in the kneading in all the clay with the straw to place the clay over the logs so they could add the new siding.

"It was quite the undertaking"

Stelmach said Sunday's sneak peak at the learning centre will be an emotional day for the entire family.

"It will inform, educate Albertans about the struggles, the challenges, the obstacles, that the early pioneers faced in settling in northeastern Alberta. Not only of Ukrainian descent, but Polish and German — those that came to break the sod here.

"It will be a lasting legacy."

The Ukrainian Cultural Heritage Village is 50 km east of Edmonton on Highway 16.