Maintenance worker rescued from side of Edmonton skyscraper

​​​​​​​A maintenance worker was rescued from the side of an Edmonton skyscraper on Friday, after high winds pulled the scaffolding he was on away from the building and sent it crashing back into a glass wall.

No one injured but some windows were damaged, says Edmonton Fire Rescue Services 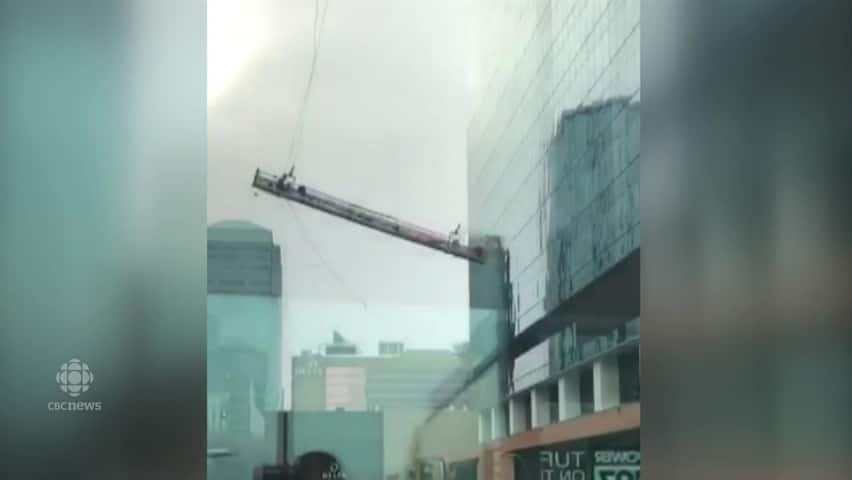 1 year ago
0:30
Emergency crews were called to save the worker, who was knocked off the platform when wind smashed it against an Edmonton highrise. 0:30

A maintenance worker was rescued from the side of an Edmonton skyscraper on Friday, after high winds pulled the swing-stage platform he was on away from the building and sent it crashing back into a glass wall.

The man was left dangling by his safety harness, about five floors up, for several minutes before he was rescued by a ladder truck.

Basma Farage works in the nearby Edmonton Tower. She was having lunch with a friend when they noticed the commotion.

"I have never seen anything like that before," said Farage, who says window washers downtown are a common sight.

Farage said the worker was dangling for at least 20 minutes before Edmonton Fire Rescue Services brought him down.

Others watched the drama unfold from their offices, the street and from the city's pedways.

"There definitely were some gasps and screams," added Farage. "It was shocking."

Two workers were on the scaffold at the time, according to a spokesperson. The first was rescued while the second remained to help steer the scaffold down. The ladder truck and a rescue team used ropes and pulleys to help guide the scaffold to the ground.

Both men were part of a maintenance crew.

Both refused to comment, and were seen walking away from the scene.

The fire department said no one was injured, though some windows were damaged on the east side of the newly constructed Stantec Tower after the platform crashed into its side several times.

PCL Construction, the general contractor for Stantec Tower, said in a release it's co-operating with Alberta Occupational Health and Safety while the accident is under investigation.

Police blocked off the street between Stantec Tower and Edmonton Tower.

Edmonton and much of northern Alberta was under a wind warning on Friday.