A St. Albert firefighter was forced to dive into the Sturgeon River to escape a dangerous brush fire on Thursday. It turns out he wasn't the only one forced to do the watery evacuation. 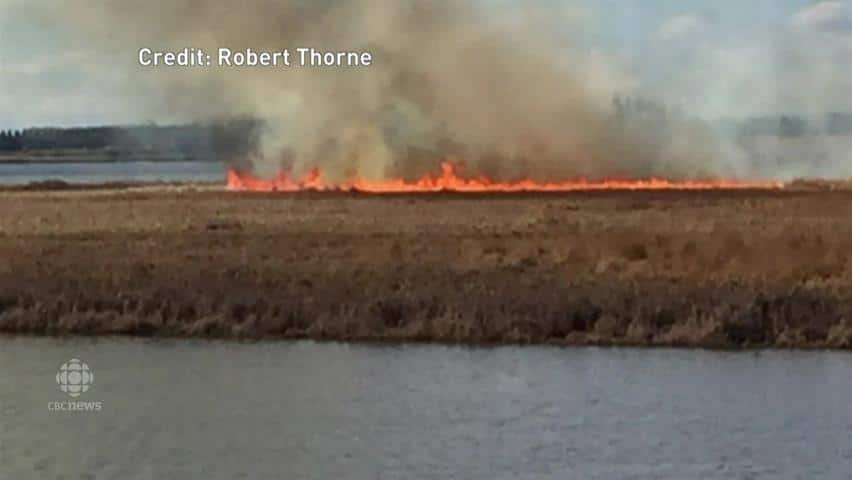 5 years agoVideo
1:00
A St. Albert firefighter had to take to the Sturgeon River to escape a dangerous brush fire, he wasn't alone. 1:00

A St. Albert firefighter was forced to dive into the Sturgeon River on Thursday to escape a dangerous brush fire.

The fire was burning near St. Albert's Big Lake, a section of the river, and was sparked by a campfire that got out of hand.

Vincent Pashko was one of the firefighters on the scene. He said the fire was far from the road — about 250 metres back — so it proved difficult to get fire trucks and hoses to where they were needed.

The combination of wind, dry grass and a lack of a nearby water supply hindered efforts to fight the fire. Crews were able to get a fire truck nearby and set about protecting the power lines so the city didn't lose power.

But the wind picked up and they were told to retreat to safety.

"We went over to the burned side, and we're sitting, waiting for the conditions to change, and a windstorm started up from behind," Pashko said. "The little bit of brush that was behind us lit on fire and ... created a windmill, almost like a tornado."

The winds stoked the hot ash behind him, and while flames weren't close to him, the heat alone was dangerous.

Pashko heard his co-workers scream for him to look out.

"I turned around and saw the big storm of ash coming towards me," Pashko said. "I could feel the heat coming up over my head, and I ran to Big Lake and dropped into the water to cool myself off.

"I was really lucky. It's just one of those things. I was in a safe zone but you just never know when the conditions are going to change."

In Pashko's nine years as a firefighter, he said it was the most dangerous situation he has come across, but not because he feared for his own safety.

"It was definitely a little more frightening than any of the others. More so because when I hit the lake I knew I was fine, but I didn't know if everyone behind me was."

When he emerged from the murky water of Big Lake, he was relieved to hear fellow firefighters calling his name. It meant he was the only one missing.

It turns out Pashko wasn't the only one who took the watery route to escape the fire.

Three moose also took to the lake to escape the heat, and were photographed by CBC reader Robert Thorne.

"I wasn't thinking about looking around," he said, laughing. "But who knows, maybe they were swimming with me, eh?

"As long as there's not alligators in the water, I'm OK."

Pashko wasn't injured but was taken to the hospital for examination.

'Be careful with your activities outdoors'

Les David Mroz, a fire prevention and safety officer, said Pashko handled the situation near perfectly. Though no one was hurt, he said he was disappointed that the fire was preventable.

"It's quite obvious that it is extreme fire conditions for wildfires out there, so be careful with your activities outdoors," Mroz said.

For information about fire bans and forest closures, visit albertafirebans.ca