The City of Edmonton has come up with a green solution to keeping plants along the new bike network in bloom. Two tricycles with solar-powered pumps are being used to water plants along the downtown route.

The tricycles take up less space and will save the city money, says operator 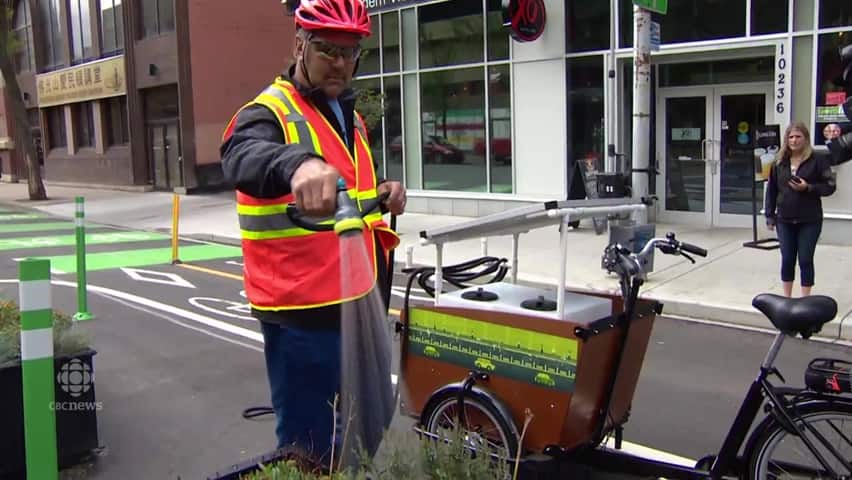 New tricycles for watering will save space and money

4 years agoVideo
1:23
The city has purchased two solar-powered tricycles to do the work of a large watering truck in downtown Edmonton. 1:23

The City of Edmonton has come up with a green solution to keeping plants along the new bike network in bloom.

Two tricycles, each equipped to hold 140 litres of water, are being used to water plants in planter boxes along the downtown network.

The trikes have pump systems that operate on solar power.

It's an attention-getting get-up.

"The reaction's been terrific from people," Peter Mueller, parks operation coordinator with the city, said Friday.

"They love the idea the city's responsive and environmentally friendly."

The city bought the trikes from local bike shop Redbike for about $8,500 each.

The city will save that much money in two years using the trikes instead of water trucks, said Mueller.

The trikes weighs close to 350 pounds when they're full of water so there's also a battery-powered assist to help the operator cycle through the bike lanes.

Operating the tricycles when the water tanks are full can be a bit awkward because the water shifts around in the tanks.

"It's not operated at high speed when you're servicing what we need to work with, so it's very safe in that regard," Mueller said.

On a full tank of water, each trike can service 15 to 20 planter boxes.

Getting to all the planter boxes on the bike network takes about a day and a half.

Because the plants are all perennials, the city only needs to water them about every 10 days.

The city decided the trikes were a better solution than watering trucks because trucks take up too much room and would interfere with the bike grid and the road.

"The trucks aren't a great solution," he said. "You're either upsetting motorists or cyclists."

Cyclists in particular have appreciated the new watering system, he said, because they leave room to get by.

Once winter arrives, the planter boxes and the trikes will be taken indoors to wait for more clement weather before they're put back in the bike network next spring.