'I belong there': Indigenous golfer Skyesong Alexis heads for nationals

One of Alberta's top women golfers rarely gets out for a round, and even then, it's usually just nine holes. But the 29-year-old's strong showing in her amateur debut has earned her a spot at the national championships. 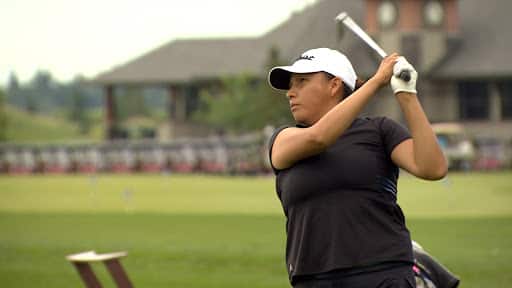 'I would give up sleep, anything for this game'

One of Alberta's top female golfers isn't a member of an exclusive golf course.

Most of her practice happens with a bucket of balls at the driving range or putting green. And when she does manage to get out for a round, she can rarely afford to play more than nine holes.

Even better, her finish — four strokes over par for a three-round total of 220 — earned her a spot at the Canadian Women's Amateur Championship, which gets underway July 24 in Vancouver.

"It's a very big deal for me, honestly," Alexis told CBC News on Wednesday while working on her short game at The Quarry's chipping green in Edmonton. "It's what I've been dreaming of my whole life."

Alexis is the only Indigenous woman on the provincial team, and according to Golf Canada, she is the only player identifying as Indigenous among the players registered for the national ladies amateur championship.

Alexis has always loved the game and showed strong promise as a junior player in her teens. But in recent years, she had all but given up on her dream to play professionally.

"I started to say, 'OK, well, I'm not going, because I know this is impossible because I don't have the support financially,'" said Alexis.

But with her showing at Willow Park, the dream is alive again.

"I practise lots of hours," she said. "I love the sport. I gotta say, I love this sport so much."

When Alexis was seven years old, her father caught her with one of his clubs in a field by her grandparents' farm on the Paul First Nation. She was hitting a golf ball around in between two hay bales.

Her father got her a set of her own clubs and spent hours with her on local courses, nurturing her talent.

At age eight, she began competing. By 14, she was winning. And by age 16, with blood blisters all over her tired hands, she could consistently shoot par or better.

"I used to be hard on myself," Alexis said. "My dad would say, 'You're not going to make it if you always get down on yourself. You have to believe you belong.' "

And she did. Until life got in the way.

Not all fun and games

Alexis, who works as a hoist operator in Edmonton's downtown Ice district, has two children. She and her spouse, who works as a salesman at a car dealership in the city's north end and is also an amateur golfer, are focused on their family.

For years, that meant much of the golfing Alexis did was as part of playtime with her young son and daughter, though she still found time to play in Indigenous tournaments in Alberta and the western United States.

"In the Aboriginal ones, there are a lot of golfers … with many talents," said Alexis.

"I know guys that could be good enough to go pro."

But, she added, they face the same financial hurdles she does in a sport that can be prohibitively expensive.

Back in the game

Alexis credits her spouse for getting her back on track. He signed her up for the provincial ladies amateur tournament.

And she came close, going one under the first day and shooting an even par on the second. But during the final round, her putting let her down and she finished five over. "A lot of putts weren't dropping on the last day. I could honestly say that was a little bummer."

But her strong overall game was enough to secure her an expenses-paid trip to the nationals as part of Team Alberta.

"I was just, like, in shock," Alexis said. "This is what I've always wanted."

Alexis has no illusions about the calibre of her competitors.

"These girls, well, they're from Canada but they winter out in the U.S. They had a whole year of practice, I came in with two months," said Alexis.

Still glowing from her amateur debut, Alexis has now set her sights on an LPGA open qualifier in Regina in August.

"I feel like I belong there," she said. "I've just been waiting for this moment. I'm keeping calm and staying with my game."