A routine licence plate check on a slow night led up to the shooting that wounded two RCMP officers in a casino near Edmonton last weekend, according to the head of the RCMP’s Alberta division.

'I lose sleep at night about our members' safety,' says head of RCMP's Alberta division 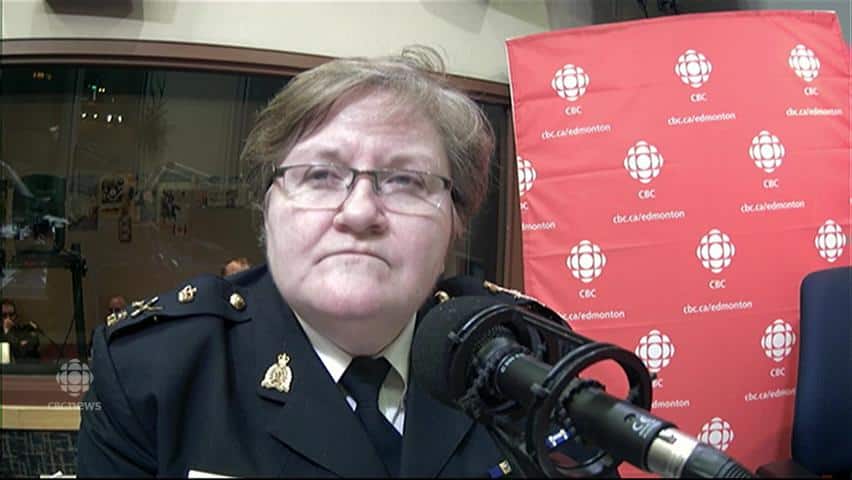 'I don't think there's anything that could be done'

A routine licence plate check on a slow night led up to the shooting that wounded two RCMP officers in a casino near Edmonton over the weekend, according to the head of the RCMP’s Alberta division.

Deputy Commissioner Marianne Ryan, speaking with Mark Connolly of CBC's Edmonton AM on Tuesday, revealed more about what that led up to the shooting that sent Const. David Wynn and Aux. Const. Derek Bond to hospital early Saturday morning.

​"It was that short, brief interaction. It isn't like they saw each other coming at a distance," she said.

Ryan said Wynn was in the casino parking lot checking licence plates — a common task for RCMP members on a slow night. Wynn got suspicious when one of the plates he checked did not match the truck that it was attached to. He decided to follow up by going inside the casino to check the building's security footage.

“Const. Wynn was on his own and doing good police work,” Ryan said.

Bond was called in to assist him in going through the tape.

After identifying a suspect on the video, the pair of RCMP officers happened to pass the man on the way out of the casino.

"I don't think there's anything that could be done," said Ryan.

“When you walk into a casino with a handgun in the front of your pants, I think your intention is clear. “

When the officers tried to arrest the man, he pulled a handgun and fired two shots. Wynn was hit in the head, while Bond was shot in the arm and torso. RCMP say the encounter lasted three to five seconds.

Both officers were taken to hospital. Bond was released the same day, while Wynn has not regained consciousness. RCMP say he is not expected to survive.

Ryan said his condition had not changed.

Officers 'could not have known' threat

Ryan also reiterated that better equipment and training would not have changed the outcome.

Critics of the RCMP have called for the agency to do more to protect officers in the wake of the shooting; Former West Vancouver police chief Kash Heed said the Mounties lag far behind city police forces.

"I lose sleep at night about our members' safety," Ryan said, adding she's "satisfied" the RCMP does everything it can for officers.

​“I don’t believe [Heed] has all the facts. And I think if he did, his opinion may change about our preparedness for this particular incident.”

Ryan said Wynn and Bond walked into a unique situation with an unusually dangerous suspect.

Others have questioned whether Bond, as an auxiliary RCMP officer, should have been inside the casino for the arrest. Auxiliary constables, which do not carry firearms, are generally assigned to tasks like ride-alongs, community policing and meeting with schools.

Ryan said auxiliary officers are not sent into violent situations. She said when Bond entered the casino, neither officer knew the suspect was inside.

“Bond was not intentionally sent into a violent situation,” she said.

“We’re saying our goodbyes today, and then from there he’ll be in a better place,” Wynn’s wife, Shelly MacInnis-Wynn, said on Monday.

MacInnis-Wynn also delivered an emotional thanks to her husband’s colleagues in the RCMP.

​"I was told when Dave graduated how much support we would have through his whole career, but I never really knew … what type of a family the RCMP were [until now]," she said.

Bond, 49, was also shot in the arm and torso. He was released from hospital on Saturday night. As an auxiliary officer, Bond was not carrying a firearm.

Police say both officers were shot by Shawn Maxwell Rehn, who was tracked to an unoccupied rural home east of St. Albert. When officers entered the home, they found Rehn’s body inside

Rehn, 34, had been charged with at least 100 offences dating back to 1994, and was banned for life from possessing a firearm.