U of A awards honorary doctorate to Canadian skiing legend

Sharon Firth, an Indigenous athlete from the Northwest Territories who competed in four Olympic games as a cross-country skier, earned a new honour Wednesday. 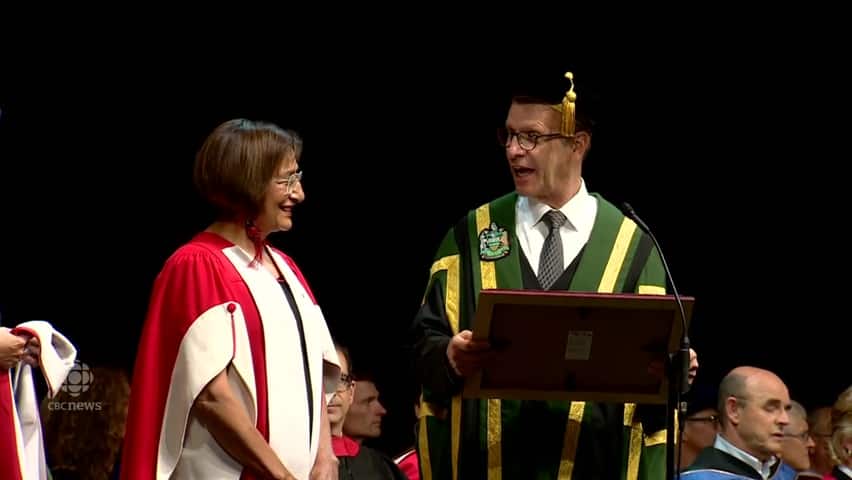 4 years ago
9:04
Sharon Anne Firth receives honorary law degree at the University of Alberta and addresses the graduands. 9:04

Sharon Firth, an Indigenous athlete from the Northwest Territories who competed in four Olympic games as a cross-country skier, earned a new honour Wednesday.

Firth, 63, of the Gwich'in First Nation,was awarded an honorary doctorate of laws from the University of Alberta.

As children, Firth and her twin sister Shirley attended residential school in Inuvik. They went on to become two of the most decorated members in the history of Canada's national cross-country ski team, representing the country at the Winter Olympic Games and on the Nordic World Cup circuit.

Shirley Firth died in 2013. Both sisters were inducted into Canada's Sports Hall of Fame in 2015 — they were the first female Indigenous inductees.

Sharon Firth, a member of the Order of Canada, was recognized by the U of A for her commitment to being an "outstanding athlete and inspiring role model for all Canadians."

She addressed the spring convocation ceremony Wednesday at the Northern Alberta Jubilee Auditorium, saying, "I take this honour very seriously. It not only shows the evolution of Canadian societal norms, but on a more universal note it shows the good that all human beings are capable of."