Brook McCargar slashed his forearms so often during his time at Edmonton Institution that it was hard to draw blood.

WARNING: story contains descriptions of self-harm which may disturb some readers

Brook McCargar slashed his forearms so often during his time at Edmonton Institution that it was hard to draw blood.

Over the years he cut himself with razor blades, plastic knives and bits of metal from sprinkler heads. During one week-long period he slashed himself six times and needed a blood transfusion, according to a report from Correctional Service Canada (CSC).

He was in an observation cell on suicide watch during most of that time.

Most of his federal sentence, which began in 2012, has been served at Edmonton's maximum security prison. He has now spent more than 2,000 days in segregation.

Time spent in segregation, under what he characterized as "depraved conditions of confinement," can make prisoners want to kill themselves, he said.

"I started with the forearms and now there's so much scar tissue, if you cut the forearms they don't really bleed," McCargar told CBC News during one of several telephone interviews."So I started doing the arteries on the biceps. And I made it up to my neck, actually. I slit my throat."

McCargar's behaviour is emblematic of a widespread problem. Inmates at Edmonton Institution harm themselves more often than men at any other maximum-security prison in Canada, according to an analysis of CSC data for the period 2012 to 2017 obtained by CBC through Access to Information.

The numbers show that Edmonton Institution had the highest rate of individual inmates who harmed themselves and the highest overall rate of self-harm incidents over a four-year period ending in 2017.

And although Edmonton Institution only had 23 per cent of Canada's total maximum-security population, it accounted for 57 per cent of all self-harm incidents.

The Edmonton prison already faces disturbing allegations. Female guards there are suing CSC over allegations that they endured prolonged sexual abuse by male co-workers, while prisoners allege they were pitted against each other in a "fight club" set up by guards.

An internal report last year found the prison operated on a "culture of fear," where staff misconduct went undisciplined and staff were afraid to report the abuse of inmates.

'They have nowhere to go'

"So you can imagine if that's the way staff are interacting, that that behaviour has to roll down hill to the inmate population as well," said Howard Sapers, a corrections reform advisor for the Ontario government, and former prison watchdog.

"And for the inmates, of course, they have no release, they have nowhere to go. They don't go home at night. They have nobody really to talk to, in many cases. And so a lot of that stress gets internalized and so we see in those environments incidents of self injury grow."

Sapers said CSC has recently made an increased effort to better respond to self-harming behaviour.

But in many cases, he said, responses to self-harm incidents that require a therapeutic response "tend to devolve just to a security response" or behaviour is misinterpreted as purposeful when it's a symptom of mental illness.

McCargar, 31, already had a criminal record when he was sent to federal prison in 2012, after pleading guilty to break and enter and possession of a firearm in a violent home invasion in Winnipeg.

After serving most of his sentence in Edmonton, he was transferred to another prison earlier this year.

A review of his status last month noted he had been placed in segregation 27 separate times during his federal sentence because of his tendency to self-harm or act out violently toward staff or other offenders when he felt threatened or stressed. 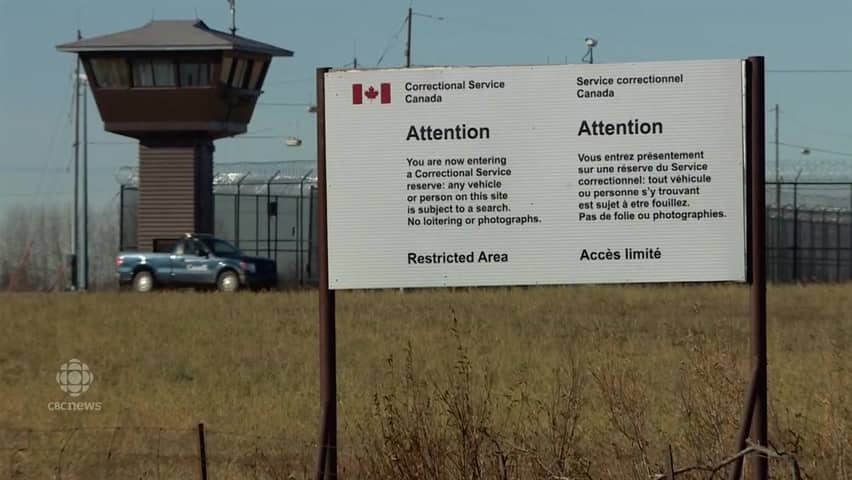 'It's a form of stimulation, actually'

2 years ago
1:35
Inmate Brook McCargar speaks to CBC about why he self-harmed at Edmonton Institution where rates are higher than any other maximum security prison for men. 1:35

The assessment found McCargar did not have a "serious mental illness," wasn't engaging in self-harm that was likely to result in "serious bodily harm" and an imminent risk of suicide was not present.

McCargar's status was upheld. In all, he has spent about five-and-a-half years in segregation.

The United Nations considers 15 consecutive days in solitary a form of torture. Earlier this month, the federal government unveiled Bill C-83, which if passed would end the practice of isolating offenders for 22 hours or more a day.

McCargar told CBC he has taken responsibility for his "crimes against society." But over the years the "sadistic workplace culture" at Edmonton Institution has many times forced him to defend himself, he said, because "there's a fight club going on there."

I might as well kill myself. I'm already dead.- Brook McCargar

"Slashing up" earns a trip to the hospital to interact with "normal people" such as paramedics and nurses in a "normal environment," he said.

It also means escaping the observation cell, where inmates placed on suicide watch are dressed in a "degrading" smock known as a "baby-doll."

"I've self-harmed to a more severe extent just to get out of that hell hole," said McCargar, who compares solitary to being buried alive. "I might as well kill myself. I'm already dead."

In 2013, the CSC commissioner launched an investigation after McCargar slashed his forearms six different times in one week with plastic knives and bits of metal he broke from sprinkler heads.

At one point, while McCargar lay on the floor in a pool of his own blood, a correctional officer placed a barrier at the door of the cell to "prevent more blood from flowing" underneath the door, according to a 149-page report compiled during that investigation.

Nearly an hour later, an emergency response team pulled McCargar from his cell "naked, bloody and semi-conscious," the report said.

Investigators concluded that McCargar self-harmed to communicate, to calm himself and to control his anxiety and rage. But prison staff saw him as "a manipulative inmate whose aggressive and unpredictable behaviour needed to be managed," the report said.

Edmonton criminal defence lawyer Amanda Hart-Dowhun, who once represented McCargar, said part of the problem is that correctional officers are not trained as mental health professionals.

She said security responses, such as using pepper spray or restraints, or placing offenders on suicide watch, don't address their underlying mental-health issues.

Over the past decade, incidents of self-injury have doubled in Canadian prisons, said correctional investigator Ivan Zinger, who serves as an ombudsman for the system.

Overall, Zinger said, the environment at Edmonton Institution is improving under new leadership, dismissals and training, but conditions of confinement are still harsh.

"My concern with Edmonton max is that it's not the right environment to manage someone who chronically self harms," said Zinger. "The response in our view should be the front line workers, should be health-care professionals, and not security focused."

Zinger called for such offenders to be placed in security-enhanced psychiatric facilities. In provinces like Alberta that don't have such facilities, CSC should reallocate resources to establish forensic psychiatric centres that would be run by the province, he said.

"Corrections for some reason thinks they can do it themselves in-house, and that's a mistake," Zinger said.

In an emailed statement, CSC said it continues to improve its strategies to address self-harm among prisoners. Training provided to frontline staff creates a better understanding of the mental health needs of offenders, it added.

Mental health care is provided either by teams within the institution or in more serious cases at one of five regional treatment centres for male inmates in Canada. The closest facility to Edmonton is the Regional Psychiatric Centre in Saskatoon.

"Incidents of self-injury are assessed by a health-care professional to determine appropriate interventions," the email said.

As part of the effort to address staff misconduct, seven employees at Edmonton Institution have been dismissed, one has been suspended and another four no longer work for CSC.

Self-harm hasn't been McCargar's only outlet. During one long stretch in solitary, he read numerous documents on prison law and policy.

"That was the only thing that they couldn't take from me, so I just forced myself to read and study that," he said.

Four years later, McCargar can rattle off sections of the Criminal Code. He has collected hundreds of pages of documents about his own case through access to information requests. McCargar has also filed a lawsuit, two human rights complaints and hundreds of grievances.

"I'm trying to learn the law and fight for human rights and liberties," he said. "I want to try and change it and fix it."