School bus drivers in a northern Alberta school division are turning to technology to ensure their students get to school and back safely. 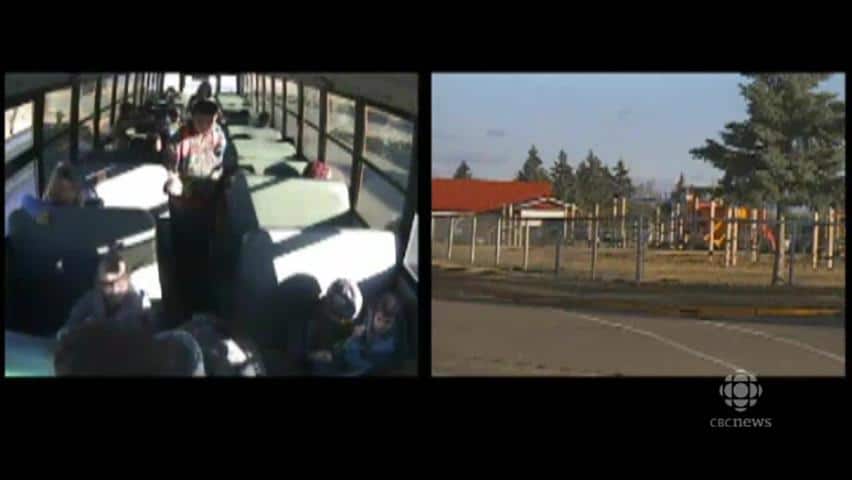 School bus drivers in a northern Alberta school division are turning to technology to ensure their students get to school and back safely.

While school buses are equipped with flashing lights, stop signs and horns, nothing seems enough to deter vehicles from flying by as children get on or off the bus.

Vehicles in many Canadian provinces are required by law to stop as a school bus loads or unloads so students can cross the road safely.

"People will come up to the lights — I can honk my horn, I can point to the lights that are flashing — and they'll look at me and keep going," says Melvina Bristow who drives a yellow bus in Bonnyville, a community in northeast Alberta experiencing rapid growth due to oil and gas development.

In late August, the school region joined a pilot program, equipping buses with two high-definition video cameras — one facing forwards, the other backwards — each  capable of capturing the licence plates of passing vehicles.

"If a vehicle passes at that point, it's what we call a fly by," said Matt Richter, the region's director of transportation. "They're not allowed to pass. You're supposed to stop when the red lights are on."

So far, he's taken about 15 video excerpts to police.

'More than I expected'

"Quite a few more than I expected," Richter said. "On this bus, on this one route, it's shocking. Very shocking."

He blames heavier traffic in the region and more distracted drivers.

"We had an incident last year where a semi truck had passed on a highway and a child just jumped out of the way in time, thank god."

The driver, he said, was talking on a cellphone.

So far, RCMP have used the videos to write out 10 traffic tickets. In Alberta, the fine is $402 and if police can identify the driver it's  worth six demerit points.

Richter is calling for the cameras to be mandatory on all buses across the country.

After the pilot program, the Northern Lights School Division will be installing the $2,500 cameras on all of its buses, matching only a few other school districts in Canada, including Kelowna, B.C., and Manitoba.

It's a cost well  worth it, if the cameras deter drivers from flying by, Bristow said.

"It's safety right. You're trying to protect the kids," she said. "If you've got the camera on here and see a car go by you don't have to worry about that traffic you just concentrate on whether the kids are getting off or on the bus."

With files from CBC's Briar Stewart and Terry Reith