A Manitoba man took to social media to find the twin sons put up for adoption 21 years earlier. "'I'm going crazy about these boys, I can't find them,'" he told his partner. What happened over the next 48 hours left the couple in shock. 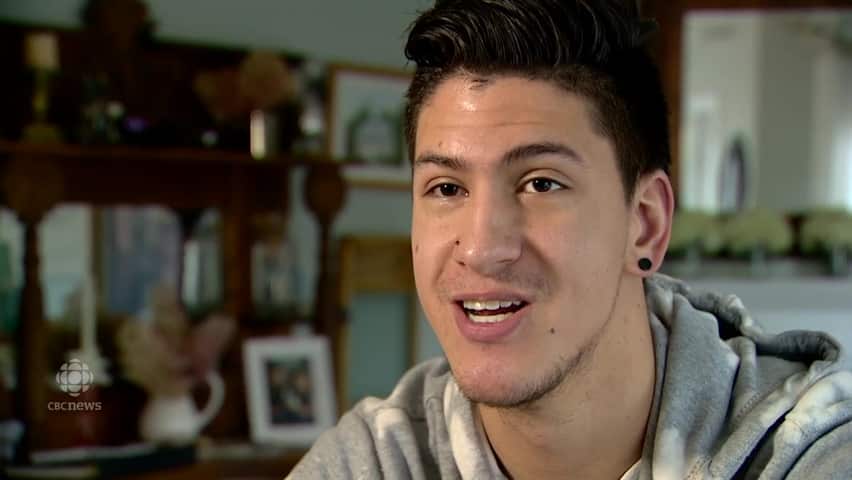 3 years ago
1:33
Ramando Gaudette describes how he and his twin brother have had an emotional reunion with his father after more than 20 years. 1:33

Friday the 13th proved to be the beginning of a run of luck for 40-year-old Roberto Gaspar, who lives in Hodgson, Man.

Gaspar and his partner, Dana Sinclair, had their first child together that day. But it wasn't the first child for Gaspar — it was his seventh.

The newborn made him think of his twin boys, Robert and Ramando. He hadn't seen them since they were six months old, more than 20 years ago.

Gaspar was still a teenager when he found out his ex-girlfriend had put the twins up for adoption. He later discovered that his daughter, Angelica, had also been adopted.

While the boys were kept together, their sister was adopted by another family. Gaspar said the children didn't have his last name and he was powerless to do anything about the adoptions.

According to Gaspar, their biological mother had a troubled life and didn't share any information with him about the adoptions, even when he spoke to her just before she died last year.

'I couldn't believe it'

Still, he was able to find Angelica a short time later and they've grown close. But the whereabouts of the boys remained a mystery. That weighed heavily on Gaspar in the days after his latest child, Persayus, was welcomed into the world.

"I was laying in bed and I looked at my girlfriend and said, 'You know, I really got to find a way to find my boys. I'm going crazy about these boys, I can't find them.'"

Sinclair asked him if he wanted her to put a post on Facebook indicating he was looking for the boys.

They wrote: "Hi my name is Roberto Gaspar I am looking to find my twin boys They were born at Grey Nuns hospital in Edmonton Alberta ...."

The post included the few details Gaspar knew about the boys, which was their names and not much else. He also added a picture of himself to the post.

What happened over the next 48 hours left the couple in shock.

"I couldn't believe it."

Within three days, the post had been shared more than 27,000 times.

"I had no idea it was going to go this far, which is beautiful. I'm lost for words to be honest," said Gaspar.

The post was quickly shared on Edmonton Facebook pages and by Tuesday morning, it reached 21-year-old Ramando Gaudette, who was getting ready for his day in the south Edmonton home he shares with his adoptive parents.

"I was about to head out to work and then my mom gets a phone call from one of her older friends [saying], 'Hey, there's this Facebook post going around, apparently there's this guy looking for his twins and my mom is like, 'Wait, what?' " said Gaudette.

"I'm like, 'Ok this isn't real, right?'" he said. "I was kind of skeptical at first and then the more I read it and talked to my mom about it, she was like, 'Yeah, this is your actual dad.' It was so surreal, it was very overwhelming."

He realized he bore a resemblance to the man in the photo that was included in the post. He thought the goatee-sporting, Harley Davidson jacket-wearing man looked pretty cool.

Gaudette's brother, Robert Gaudette, who was working out of town at the time, soon learned the news as well. They immediately began trying to contact their biological father and by Wednesday, they were speaking to him for the first time.

"We had a three-way phone call with him and it was very emotional," said Ramando Gaudette. "It's just crazy to think he's been looking for us for about 21 years now."

There were tears for both the boys and their dad.

"I couldn't stop crying, just everything went through my mind," said Gaspar.

"The first thing that I let them know was that I never gave up on them and they were always in my heart. It was too much. I was shaking, nerves were hitting high, my stomach was in knots."

They spoke about their resemblance to one another and Ramando Gaudette wasted no time asking his dad an important question.

"I asked him why I couldn't grow facial hair," said Gaudette, with a laugh. "He doesn't have a problem with that at all. He just laughed and said, 'You'll get there.'"

The boys soon learned they would be able to reconnect with the sister they lost touch with so many years ago. They also found many other new family members, including four half-siblings.

"I woke up after I talked to my dad and I get all these friend requests on Facebook from all these family members I've basically never heard of before," said Gaudette.

Plans have been made for the boys to meet their uncles, aunts and grandmother, who all live nearby. This Christmas, Gaspar plans to host the whole lot at his home in Manitoba.

"Before anything bad happens to me — because I am at the age when things show up, you know — I just wanted my kids to get to know each other," said Gaspar.

"I don't want to pull them away from nobody. I just want them to love each other and get to know each other. That's what I want."

The ordeal has been a lesson in the power of social media for both Gaspar and his sons.

"I think it's a great way to try to reach out to somebody," said Ramando Gaudette. "I mean, if you really love somebody and you want to find them, put up a post like that. For all you know, it could turn out like this."