If it has wheels chances are it's here. Take a rare behind-the-scenes tour of the storage facility at the Reynolds-Alberta Museum in Wetaskiwin, Alta.

Noel Ratch strolls through the Reynolds-Alberta Museum collection storage facility, a place most people rarely get a chance to see.

The 110,000-sq.-ft. treasure trove in Wetaskiwin, Alta. is chock full of cars, motorcycles, snowmobiles, tractors and the largest aviation collection in Canada, right down to a full-scale model of the Avro Arrow used in the 1997 Dan Aykroyd movie The Arrow.

"All of our collections reflect Stan Reynolds, our great benefactor, because those were the things he was interested in," says Ratch, the museum's director.

"He grew up in farm country, he sold airplanes, he sold cars and industrial machines."

The museum, opened in 1992, is run by the Alberta government.

Ratch squeezes between a yellow convertible and a mine-rescue ambulance, part of the collection that's grown to 6,400 artifacts. 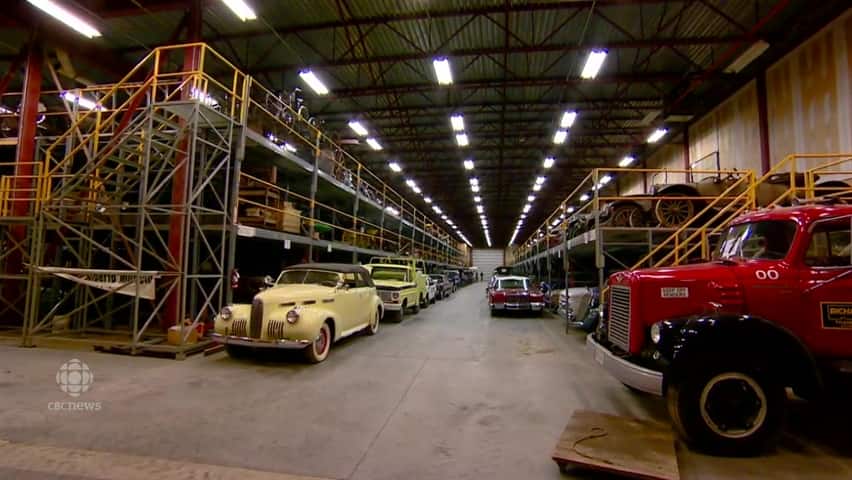 2 years agoVideo
2:33
Tour behind the scenes at the Reynolds-Alberta Museum storage facility with director Noel Ratch and Our Edmonton host Adrienne Lamb. 2:33

"As you can see it's getting quite tight in here," he says. "We have lots of stuff, and you never have enough room, and we actually have a new collections storage facility coming on site, where we're actually going to show more of our collection to the public."

Construction on the $39.5 million facility is expected to start next spring. When it's finished it will be fully accessible to the public.

The storage facility will allow museum visitors to see old stuff and other things they wouldn't otherwise know about. Some items will be easy to relate to, such as a recently acquired white 1981 K-Car.

"We do have a really interesting relationship with the car, and cars really do define us in some ways," Ratch says. "And people find that connection here."

You can see more from the Reynolds-Alberta Museum this week on Our Edmonton on Saturday at 10 a.m., Sunday at noon and Monday at 11 a.m. on CBC TV.