'No more cuts': Nurses rally across Alberta in support of public health care

Hundreds of nurses turned out to rallies across Alberta Thursday to protest zero salary increases, possible privatization and cutbacks to the public health care system.

'It’s not a good situation for anybody right now,' registered nurse says

Hundreds of nurses turned out to rallies across Alberta Thursday protesting against wage freezes, possible privatization of services and cutbacks to the public health-care system.

The United Nurses of Alberta held 33 rallies in 25 communities. They were joined by members of the Alberta Union of Provincial Employees at locations including Foothills Hospital in Calgary and the Misericordia Hospital in Edmonton.

About 200 UNA and AUPE members lined 111th Avenue outside the Royal Alexandra Hospital in Edmonton over the lunch hour.

They waved flags and chanted slogans like, "No more cuts, Kenney sucks" as passing motorists honked their horns.

Nurses say they are seeing effects of cuts they say they are hurting health care. They are also concerned the government intends to lay off registered nurses and use licensed practical nurses in their place — making LPNs do more work without paying them more money. 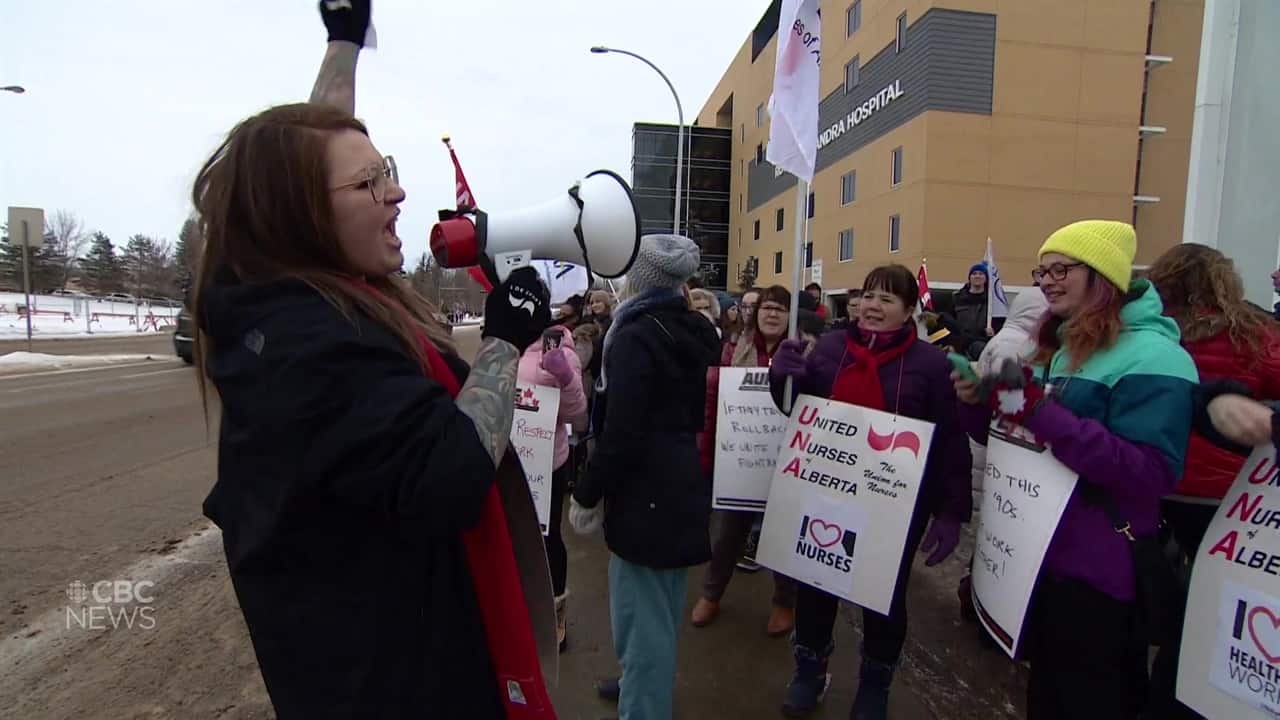 The government contends that an effort to reduce costs will not reduce care.

"It's what we campaigned on, the MacKinnon report and the AHS review confirmed it," Steve Buick, press secretary for Health Minister Tyler Shandro, said in an email Thursday afternoon.

"We campaigned on strengthening our publicly-funded health system, starting with increasing access and reducing wait times. Every dollar we save will stay in the system to do that, including funding 80,000 more surgeries to give Albertans the best access in Canada."

The government started off bargaining for the next collective agreement with UNA by offering four years of pay freezes and cuts to some contract provisions.

A report this month by Ernst & Young contained 57 recommendations and 72 savings opportunities to improve the quality and sustainability of health service. The report outlined ways to save up to $1.9 billion.

Shandro has said some of its recommendations will be off the table. AHS is reviewing the report and has said it will develop a detailed implementation plan within 100 days.

"I am out here today because I really value public health care," said Samantha Waller, an intensive care nurse at the Royal Alex. "I value the services that I provide. I know it's important to my patients and their families and I know it's worth fighting for."

Aisha Brown, another registered nurse at the same hospital, recently returned to work after tearing a muscle in her shoulder while lifting a patient to take her to the washroom. The injury occurred while her unit was short-staffed, she said.

Like Waller, Brown is concerned about the quality of care she is able to provide patients.

"It's so unfair for patients. It's unsafe for the staff. It's not a good situation for anybody right now," she said.

"I love my job. I love what I do. And I just want to do it to the best of my ability and right now I'm not able to do that."

In Calgary, about 200 workers were joined by NDP Leader Rachel Notley at a rally outside Foothills Hospital.

Notley told reporters she is hearing more frustration every day about the direction of the United Conservative government is taking on health care.

"On the doorsteps, people are angry about the attacks on health care that Jason Kenney is introducing," Notley said. "They remember him promising not to do this."

The government has asked for expressions of interest from companies interested in providing surgeries like hernia repair and mastectomies in non-hospital, private surgical facilities.

Nurses were joined by members of AUPE at a protest of about 50 to 60 outside Alberta Hospital Edmonton, a psychiatric facility in the city's far northeast.

AUPE member Pauline Clark has worked as a psychiatric aide at Alberta Hospital for 21 years. She said she is concerned about the impact of job cuts because the patients on her unit can be volatile.

Clark said all the public sector unions in Alberta are facing the same negotiations and the same attempts at cost-cutting.

"All the unions in this province are united as one," she said. "We are all saying the same thing to Jason Kenney. Stop. Take a look at what you are doing. This is dangerous."

The province has proposed the nearly 24,000 AUPE members who work in general government services take a one-per-cent salary rollback, followed by three years of no increases, in the next collective agreement.

The government also wants to remove provisions against contracting out and layoffs.

AUPE president Guy Smith is expecting the same for union members who work in health care as those negotiations get underway in the next two weeks.

"Those issues are going to be dealt with at the negotiating table hopefully, but we've also been preparing our members for the fact they may have to take job action in order to resolve this," Smith said. "Because it's going to be a struggle to do that at the bargaining table."

With files from Dave Gilson in Calgary