When Edmonton's City Centre Airport closed three years ago, many believed it was also the end for the Alberta Aviation Museum on Kingsway Avenue. Now a massive redesign and a new look for the vintage planes has many revved up about the future of the historic landmark. 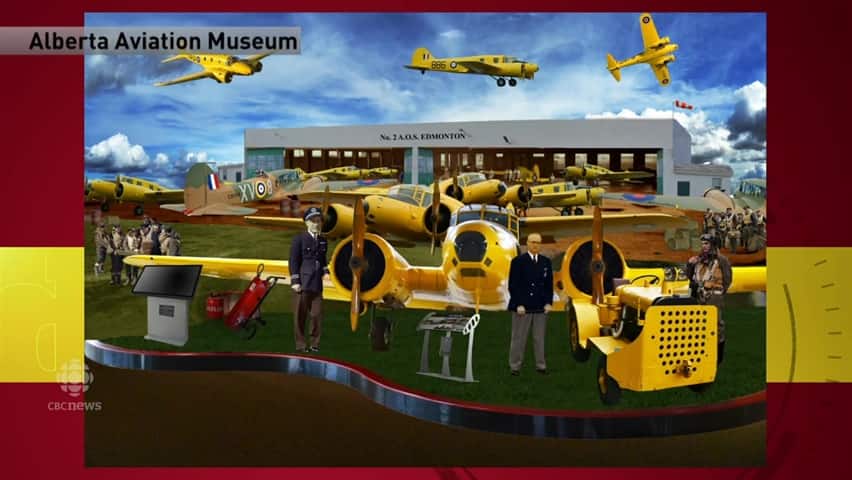 A new look for these old airplanes

4 years ago
1:24
Lech Lebiedowski, head curator at the Alberta Aviation Museum in Edmonton, shows us the transformation in store for displaying their vintage aircraft. 1:24

Volunteer Gerry Blacklock has been tinkering on airplanes at the Alberta Aviation Museum for more that 20 years.

But it's not his first time working around this hangar on Kingsway Avenue in Edmonton.

The 89-year-old helped out as a teenager at Blatchford Field during the Second World War.

Now Blacklock says he's seeing a transformation of this haven of Alberta aviation history, one he calls a miracle.

"There's a little artistry in the way they're laying them out now," Blacklock said. "It's a big improvement in how the airplanes are displayed."

The new layout is the idea of Lech Lebiedowski's, the museum's head curator, who is also a history professor at the University of Alberta.

"Each aircraft will be associated with specific historical figures such as Wop May, Grant McConachie, all those famous pilots," he explained.

This will give the museum the chance to "tell those fascinating local stories with more interaction, with more audio and video," Lebiedowski said.

Lediedowski and others at the museum have painstakingly recorded oral histories from these pioneers of the skies.

The vignettes will play on more than a dozen screens throughout the redesigned space so visitors can hear the adventures of bush pilots and acts of bravery of war time aces from the people who lived it.

But that's not all.

"This is a completely new concept for our museum and we're starting changes now from top to bottom," Lediedowski said.

The new flight plan for the aviation museum is being charted by new executive director Jean Lauzon.

New staff, new museum accreditation status from the Alberta Museums Association and the gallery redesign are all part of the plans moving forward, she said.

Lauzon says the biggest challenge at the moment is making sure people know they're still open for visitors throughout the renovations.

"There's been a lot of confusion with people thinking when City Centre Airport closed, we closed. We're not closing. We are here and here to stay, forever," Lauzon said.

The hangar itself was built in 1941 and has been designated a provincial and municipal historical resource.

Future upgrades include a revamped gift shop and museum entrance.

Current work on the gallery redesign is set for completion in the summer of 2018 with an estimated price tag of $150,000, Lauzon said.

Much of the work is being completed in the hangar shop by the same group who restored the vintage airplanes — a crew of about 40 dedicated volunteers like Blacklock.

Blacklock says people need to be reminded of Edmonton's rich history of the early days of aviation and the wondrous adventures of the early pilots and their classic planes.

"People nowadays immediately visualize a jet, but I like the ones with the fan out front."

You can see more from the Alberta Aviation Museum on Our Edmonton Saturday at 10 a.m. and Sunday and Monday at 11 a.m. on CBC TV.