Ever since an overdose prevention site opened in Red Deer last October, the community has been divided.

‘We are truly on the frontlines of this crisis right now’

Ever since an overdose prevention site opened in Red Deer last October, the community has been divided.

On one side are the people who use the services and the nurses who help it run smoothly, and on the other are the residents and business owners in the neighbourhood worried about how the services will affect their livelihoods.

"The safe consumption site, like many harm reduction initiatives when they're first implemented, is causing a great uproar," said Kath Hoffman, executive director at Safe Harbour, an organization offering services and support to people experiencing homelessness in Red Deer.

The overdose prevention site, operated by Turning Point Society of Central Alberta, is in the parking lot of Safe Harbour, and many people who use Safe Harbour's services also use the site.

The site is a temporary measure put in place by Health Minister Sarah Hoffman to run from Oct. 1, 2018 until Oct. 1, 2019 and since mid-February has been open 24 hours a day for people in the community.

Turning Point hopes to open the permanent supervised consumption services site down the street in a vacant building in the Railyards area in October.

"People see the service as enabling. People want this problem, their social disorder problem to go away. They don't want to encourage it," Hoffman said. 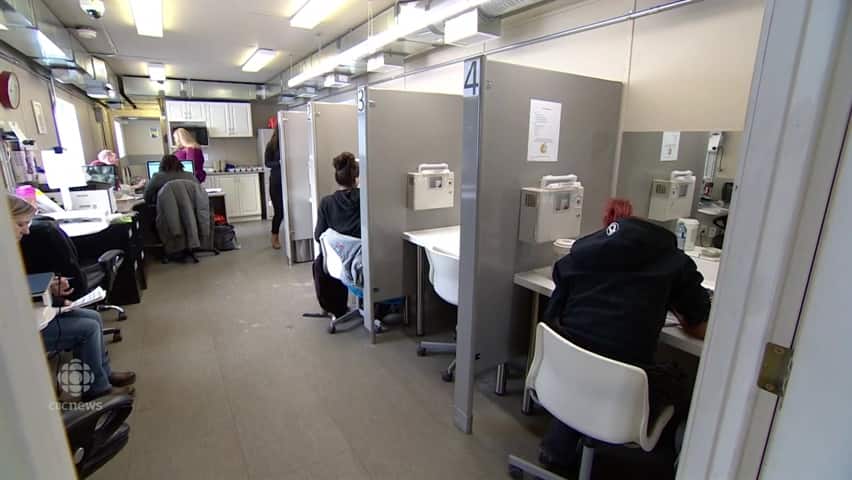 2 years ago
2:30
The supervised consumption service in Red Deer is dividing the community. Some people are worried about the impact on their businesses while others are hoping residents will understand how the service is saving lives. 2:30

Hoffman understands why people don't want the site in Red Deer, but she said she's also witnessed first hand why it's a necessary service for the community.

"The people out there are already using. They're using needles ... unsafely, they're a danger. There's a lot of bad drugs out there," said Hoffman. "So for them to be able to go in and be supervised medically as they're injecting is a lifesaving measure."

"We are truly on the front lines of this crisis right now," Hoffman said.

In 2018, Red Deer had the highest number of fentanyl overdoses per capita in the province. From the beginning of the year to the end of September, 31 people died.

In that time, the site has recorded 224 suspected opioid overdoses requiring medical intervention. In each case, the person survived.

Like other people in the community, Gareth Scott said he isn't against the services but doesn't want them to operate down the street from his business.

"I don't think the small business owners here wouldn't support some drug addiction help and do what they can, but when their livelihoods are threatened they have to preserve it," said Scott, owner of Fetch Haus, a pet store and grooming service in Red Deer.

Scott is concerned about how the overdose prevention site and eventual supervised consumption services will affect the community.

"It's going to become a wasteland."

Scott opened Fetch Haus a year ago but said he's moving his business to the city's South Hill neighbourhood next month, despite having three years left to pay of his lease.

"It's better to lose that than it is to lose the business," Scott said.

Scott would have liked to see the site open in one of the warehouse buildings in the North End, along with the Safe Harbour services.

"Almost as soon as that injection site came, we had considerably new and different traffic going up and down the streets interfering with and scaring customers," Scott said.

He said his 16-year-old granddaughter won't come back to the store after an incident with a person in front of the store who he believes was under the influence.

"They were screaming and yelling that they were going to kill somebody and it scared her badly," Scott said.

Scott also pointed to an increase in needle debris in the area as a result of the overdose prevention site.

"It's everywhere. It starts over by the injection site and comes in this way. After a weekend our tree areas are just cluttered with needles," Scott said.

"All the needles and supplies that are used in the overdose prevention site stay on site," Fleck said.

In addition, a staff member goes out once a day to collect needle debris from the surrounding area, she said.

There are also 14 needle box drop off locations across Red Deer.

Hoffman said she understands why the issue has created tension in the city.

"Red Deer doesn't look the same as it used to," Hoffman said.

She acknowledges there's a fear that's settled over the city.

"It's understandable to be afraid of people that don't look normal, they don't smell right and they may have peed on your building because there's no bathrooms downtown for people to use," Hoffman said.

But, she noted, that fear is "preventing us from doing something positive about what's going on."

How does the city move forward to tackle this problem, Hoffman asked.

"I know education helps. The crisis came before we could get everybody educated. It's the shame and stigma that prevents us from being human," Hoffman said.

Storytelling is also important, she adds. The ability to tell stories about what happens when they aren't able to get people the help or support they need.

Hoffman said she hopes those stories will help people gain a different perspective and understanding of what these community members need and what their daily lives are like.

"So my way is through the heart. I think that's our best chance."