A Red Deer mom is showing thieves it’s a bad idea to get between her boy and his bicycle.

A Red Deer mom is showing thieves it's a bad idea to get between her boy and his bicycle.

Leah Lauscher said her 13-year-old son's bike was stolen on Wednesday morning. He had popped into Parkland Mall on the city's north end, leaving his unlocked bike outside.

Lauscher got a call from her son at about 11:45 a.m., who told her his bike and helmet were gone. She reported the theft to police, but figured it wouldn't be one of their top priorities.

So she went into vigilante mode.

After dropping her son off at home, Lauscher took a drive around the city, making her way to downtown Red Deer. At about 12:40 p.m., she spotted a man holding the bike, walking alongside two other people.

"The three of them were just walking down the sidewalk right in front of me. So I just pulled in and started recording," she said.

"I had adrenaline going and my mama-bear instincts took over."

Lauscher got out of her car and confronted the group, letting them know she wanted the bike back.

"I figured this was my only chance," she said. "The bike probably would not get found otherwise. And here it was right in front of me."

She caught the interaction on camera, though there's no evidence to suggest the people in the video stole the bike. 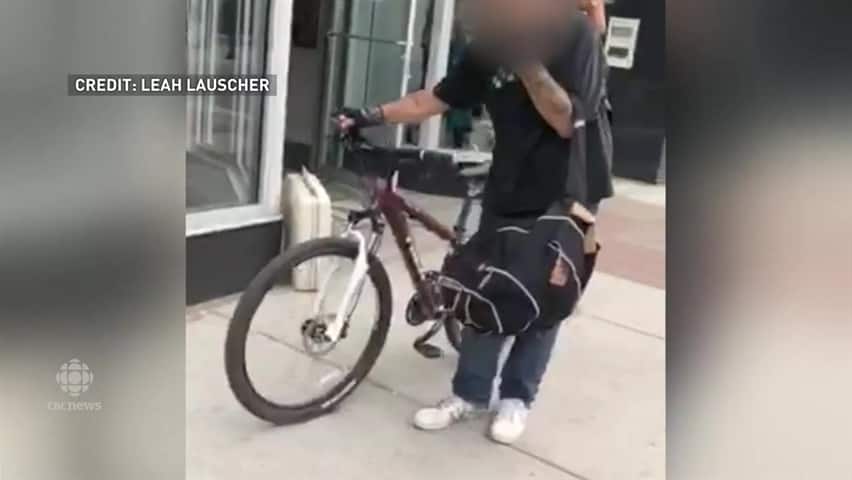 2 years ago
0:23
A Red Deer woman retrieved her son's stolen bike from a group of people she spotted downtown. 0:23

When Lauscher told the man the bike he was holding belonged to her son, he dropped it immediately.

"Somebody just gave it to me just now, I swear to God," he said, as the woman he was with told Lauscher they bought the bike near the mall.

The group quickly dispersed, appearing to be camera shy. Lauscher was left triumphant, bike in hand.

'We would've liked her to call the police'

Lauscher didn't get her son's helmet back, but said he was thrilled the bike was found.

"He was pretty amazed," she said. "I think I'm his hero right now."

Despite the happy ending, Lauscher said she realizes confronting the group could have ended badly.

"I wouldn't recommend that people necessarily go and do that just because of the violence that's out there. Definitely if it's safe, go ahead and try to recover your stuff," she said.

"We would've liked her to call the police," Kay said. "We're certainly very proud that she had the courage to get her bike back and that she was able to confront that person."

Anna McMillan is a reporter at CBC Edmonton. You can reach her at anna.mcmillan@cbc.ca