RCMP officers stood guard outside a high school in Red Deer, Alta., Tuesday morning as more than 40 demonstrators marched outside the grounds as part of an anti-immigration protest.

RCMP officers stood guard outside a high school in Red Deer, Alta., Tuesday morning as more than 40 demonstrators staged an anti-immigration protest in the parking lot across the street.

The demonstration, which included members of the anti-immigration group Worldwide Coalition Against Islam, was staged after two fights last week that involved students from Syria, who critics claim were not as harshly punished as other students who took part.

In a statement posted Friday, school officials said the brawls resulted in the suspension of all eight students involved, and they rejected social media claims that Syrian students were less harshly disciplined.

Stephen Garvey, who is the leader of the National Advancement Party of Canada, a federally registered political party,   said the intent of the protest was to raise awareness about the need to protect "Canadian culture" in schools.

Police presence at Lindsay Thurber school in Red Deer as protesters across the street speak to media. <a href="https://t.co/4d2akCyHIP">pic.twitter.com/4d2akCyHIP</a>

"Who we are as a people, as a country, as a heritage, it's all getting pushed aside, and if we don't stand up for us as a people, as our country, we're going to lose it," Garvey said. "We welcome people coming to our country, but they have to integrate into our society. It's not about accommodating their values.

"It's about standing up for Canadians, our freedoms, our civil rights and our liberties. And some of these cultures that are coming are incompatible with our own," Garvey said.

Grade 11 student Thomas Gower said the protests are unnecessary and have made students feel unsafe. He stood nearby holding a sign that read, "No More Hate, No More Fear, Refugees are Welcome Here." 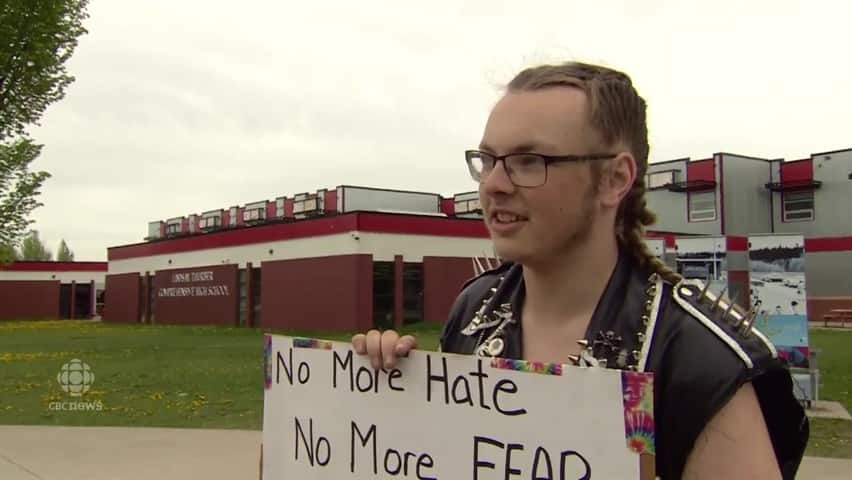 "There was never really a big issue until this incident. Everybody kept to themselves really," said Gower. "The spreading of misinformation leads to things like this. You shouldn't have to worry about things like this when we're supposed to be a welcoming and accepting school.

"Let's be a little bit more welcoming, why don't we?"

Another Grade 11 student, Ursella Khan, who is Muslim, addressed the protesters. She called for improved integration of newcomers, but also better understanding of Syrians.

"There's a war going on, those civilians, we need to help people like that," said Khan.

One protester suggested sending them all to Saudi Arabia.

"That's wrong," Khan shot back, appearing unrattled despite being interrupted intermittently by protesters who shouted questions about her religion.

'This makes me ill'

"I would like to assure that our sons and daughters will be safe [Tuesday] at school," said Lower in the statement.

"I encourage you to make sure that your kids come to school ... so that their education is not disrupted by the fear-mongering of people that know nothing about us," Lower said.

"Many of our refugee and immigrant students have indicated that they are afraid to come to school," he added. "This makes me ill."

He also encouraged parents and members of the public to "get the real facts."

On Tuesday, Lower told media that the conflict arose out of a misunderstanding due to a language barrier between two Grade 9 boys at a skatepark.

Lower said the Syrian boy thought something derogatory was said toward a Syrian girl, and when some boys later sought clarification off school property "it ended up in a couple of punches being thrown."

The following day, Lower said, a non-Syrian student confronted others at lunch hour to find out what happened and "another incident broke out" that was recorded and widely shared on social media.

Midday Tuesday, Lower and school board superintendent Stu Henry, flanked by police, addressed protesters' concerns. Lower told demonstrators the school is as "concerned with everyone's safety as you are."

"What is not true is that people were dealt with in different ways." He said anyone who threw a punch or kicked or hit was suspended for five days.

"I don't know how or why somebody would put out that it was dealt with in any different way," he said.

A Facebook post about the fight last Tuesday shows a graphic video of what appears to be a scrap between several boys in a parking lot. The same post criticizes the school's handling of the incident.

The post, which has been viewed more than 22,000 times, claimed "refugee kids" were running around whipping other children at the school, and suggested the perpetrators would not be punished because they were "acting within their religious beliefs."

The video was posted by Never Again Canada, a group that claims to fight against "anti-Semitism, propaganda, terror and Jew hatred In Canada." The protest group, and many commenters, had spoken of plans for a staged demonstration on school grounds to "stop Islamic terror in our schools."

RCMP are still investigating the fights, but when asked about pending charges, a spokesperson said police are considering several options.

"There may be a restorative process that we can put into place here to try to heal some of this hurt," said Const. Derek Turner.

School officials will hold in-class discussions about the controversy, focusing on how to "prevent anything like this from happening in the future."

"I am truly sorry we have to deal with this," Lower said in his letter. "The students, parents and staff do not deserve this false and negative attention.

"We will persevere and come out stronger because of it."