'These are not hunting rifles': RCMP west of Edmonton seize arsenal of dangerous firearms

RCMP west of Edmonton have seized an arsenal of dangerous weapons, including an AR-15 style rifle fitted with a suppressor and a 100-round drum magazine, following a three-month investigation.

Three-month investigation leads to charges against two men, ages 34 and 27 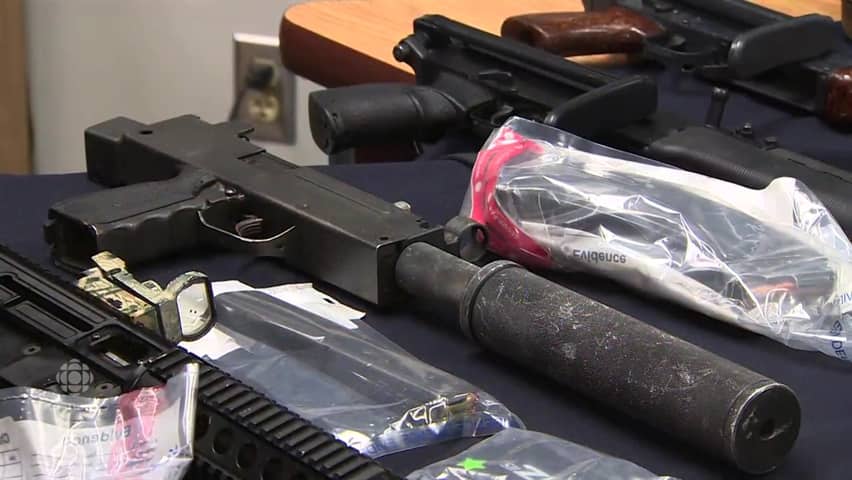 'These weapons serve no legitimate purpose in our society'

RCMP west of Edmonton have seized an arsenal of dangerous weapons, including an AR-15 style rifle fitted with a suppressor and a 100-round drum magazine, following a three-month investigation.

On April 21, Stony Plain/Spruce Grove/Enoch RCMP officers executed two search warrants, one for a home in the summer village of Val Quentin and the other for a storage locker in Parkland County.

"They were loaded and ready to go," Staff Sgt. Mike Lokken said. "It was not responsible gun owners who had these in their possession. It's scary that anybody that could pick these up could fire them within a matter of seconds."

The investigation also turned up 18 grams of cocaine, 75.5 grams of methamphetamine and 21 litres of GHB, known as a date-rape drug. Also seized were $10,000 in cash and a stolen truck, holiday trailer and quad.

Among the seized firearms were a 9-mm submachine gun, a .40-calibre carbine with suppressor, a 9-mm carbine with a high-capacity drum magazine, a pump-action shotgun and a handgun with the serial number filed off.

"These are not hunting rifles," Lokken said. "In the hands of criminals, these weapons serve no legitimate purpose in our society."

The guns posed a dangerous risk to officers when in the hands of criminals, he said.

"This is a significant seizure," Lokken said. "We don't typically come across this type of weaponry. It is just an indication of what our police officers are facing on the streets in this day and age. It's becoming increasingly worse and dangerous."

Deputy Commissioner Todd Shean, commanding officer of Alberta RCMP, said the seizure is an example of how a coordinated crime-reduction strategy can have an impact.

"The amount of firearms and drugs we seized on this one operation posed a real and serious threat to the safety of Albertans," Shean said in a release.

Two men, ages 34 and 27, were arrested and have been charged.

The 34-year-old, who remains in custody, is facing 50 charges, including possession of a loaded prohibited firearm and possession of cocaine for the purpose of trafficking. His next court appearance is Wednesday in Stony Plain.

The 27-year-old, who was released from custody, is charged with possession of a prohibited device and possession of property obtained by crime over $5,000. He is also due in Stony Plain court on Wednesday.
CBC's Journalistic Standards and Practices|About CBC News
now