Young Edmonton athletes got a chance to show off their skills Saturday in the hopes of being discovered by Canada's top sports talent scouts. 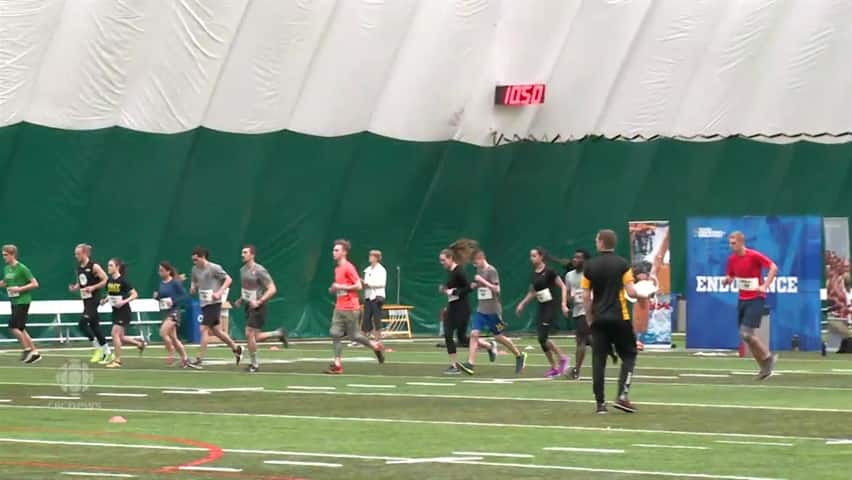 4 years ago
0:46
The RBC Training Ground gave athletes a chance to train test whether they have what it takes to be Olympians in Edmonton Saturday. 0:46

Edmonton's top young athletes put their skills to the test today to see if they have what it takes to be Olympians.

The RBC Training Ground, held at the University of Alberta's Foote Field, took athletes between the ages of 14 to 25 through rigorous speed, strength and endurance testing in the hopes of being directed toward training for Olympic sport.

Athletes were observed by officials from the Canadian Olympic Committee and 11 national sport organizations. Top athletes will move on to the finals in Calgary next month, where they have the chance to win a trip to the 2018 Olympic Games in Pyeongchang in South Korea.

"We are searching for Canada's next Olympian," said skeleton racer Cassie Hawrysh, who represented Canada at the 2014 Olympic games.

"Getting a chance to get all these athletes from across Alberta in front of all these national sports organizations is honestly such a great opportunity."

We are searching for Canada's next Olympian.- Cassie Hawrysh, Olympic athlete and mentor

It's an exhausting workout and a big opportunity for young athletes, many of who have set their sights on making the Olympics some day.

Benjamin Williams, 24, trains in Edmonton full-time as a track and field athlete, specializing in the 100 and 200-metre sprint.

On Saturday, he broke the Alberta record for the 40-metre sprint test by completing it in 4.71 seconds.

"I just came out here to have fun, just see what everything is like," Williams said.