An Alberta judge has granted CN an injunction against a small group of demonstrators who blocked the company's main rail line in west Edmonton.

'Albertans will not be economic hostages to law-breaking extremists,' justice minister tweets

An Alberta judge has granted CN an injunction against a small group of demonstrators who blocked the company's main rail line in west Edmonton.

Court of Queen's Bench Justice Paul Belzil said Wednesday the injunction will last 30 days and will apply across Alberta. CN can ask to have the court injunction extended beyond that time frame.

The court ruling was issued less than 12 hours after demonstrators set up the blockade across the tracks in the area of 110th Avenue and Range Road 261.

Throughout the morning and into the afternoon, the scene at the blockade grew increasingly chaotic, and at times heated arguments broke out between the group manning the barricade and a few counter-protesters.

At about 1:30 p.m., as counter-protesters pulled up to the site with a trailer, signalling another possible standoff, a man dropped affidavits at the feet of those on the blockade, who were linked arm in arm.

Robert Miller, spokesperson for a group called Cuzzins of Wet'suwet'en, said the documents were mistaken for the injunction requested by CN, though at that time the court was still hearing arguments in the case. Both demonstrators and counter-protesters began dismantling the blockade.

Around 3 p.m., not long after the injunction was granted, the camp had been entirely dismantled and CN employees were testing crossing lights.

The main Alberta rail line in the area is traversed by about 40 freight and passenger trains each day, CN said in an affidavit filed in court. The company said 14 trains had been halted because of the blockage by 12:30 p.m.

Earlier in the day, Premier Jason Kenney said the Alberta government expected that police would enforce any orders made by the court.

"We have a highly respected and independent judiciary, and in cases where judges issue injunctions to stop illegal blockades then it's the job of the police to enforce those injunctions," Kenney said during a news conference in Calgary.

But in the end, enforcement was not required.

Wednesday's blockade was the latest protest staged in support of the Wet'suwet'en hereditary chiefs, who oppose a natural gas pipeline project in British Columbia.

In a post from a Twitter account set up Wednesday morning, the Cuzzins for Wet'suwet'en group said it was staging the protest "in solidarity with the Wet'suwet'en."

Beginning at about 4 a.m., the tracks were blocked by a barricade made from wooden pallets spray-painted with banners that read "No consent" and "Reconciliation is dead." A car also blocked the tracks.

Vehicle traffic was travelling through the blockade scene. Some early-morning commuters honked as they passed. One driver briefly got out of his truck to yell at the demonstrators.

"There are some people that are on the rails," Edmonton police Staff Sgt. Barry Maron told CBC News in an interview early Wednesday. "They're not on the roadway, they're on the CN property, and we're working with the CN police to resolve it.

"I believe there is also a train down the tracks waiting."

Police were in "no particular rush" to engage with the demonstrators, Maron said.

"It's pretty early yet," he said. "I know we've been out there and had a quick look around, but we haven't engaged with anybody at this point."

Kenney said the demonstrators were not acting in solidarity with the Wet'suwet'en. People in the central B.C. community were adequately consulted about the pipeline project and are keen to reap the economic benefits, he said.

"I'm frankly getting a little bit tired of media misreporting the nature of these blockades," Kenney said. "The Wet'suwet'en elected tribal council voted to enter into an agreement with Coastal GasLink.

"If Canada means anything, then we need to be able to work together constructively. Reconciliation doesn't mean letting a couple of people shut down the national economy. Reconciliation means listening with respect and ensuring Indigenous people get the chance to benefit from responsible development, to move their people from poverty to prosperity."

All 20 elected band councils along the pipeline route, including Wet'suwet'en councils, have signed benefits agreements with Coastal GasLink. But the Wet'suwet'en hereditary chiefs who oppose the pipeline say those councils were established by the Indian Act and only have authority over reserve lands. 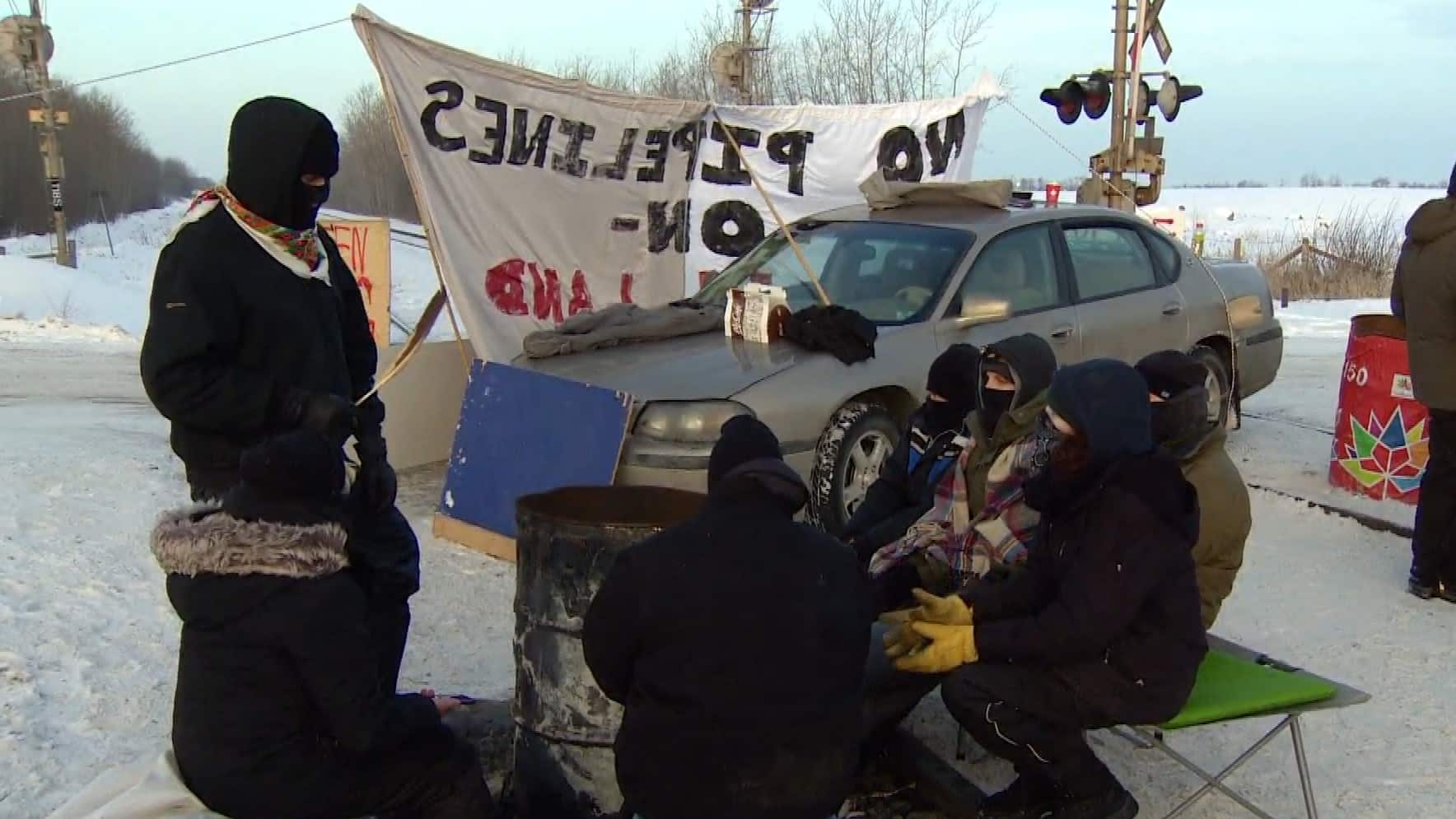 Blockade set up on CN rail line near Edmonton

Supporters of the Wet'suwet'en hereditary chiefs have disrupted major portions of the country's freight and passenger traffic with railway blockades for more than a week.

Several hereditary chiefs oppose the planned construction of the $6.6-billion Coastal GasLink pipeline across northern B.C., which would run through Wet'suwet'en territory.

The Confederacy of Treaty Six First Nations, which represents 16 First Nations across Alberta, said in a statement that it supports the hereditary chiefs.

"We call upon the RCMP to honour the request of the Wet'suwet'en people by immediately removing the RCMP's mobile command unit from Wet'suwet'en territory.

"Following this, we call upon Prime Minister Trudeau and (B.C. Premier (John) Horgan to immediately meet with the Wet'suwet'en people to resolve this in a peaceful manner for all Indigenous Peoples and Canadians."

In a statement in the House of Commons on Tuesday, Prime Minister Justin Trudeau asked for patience as his government seeks a negotiated end to the protests.

Trudeau said his government is committed to "dialogue" over the use of force with the Indigenous protesters who have shut down CN Rail in Eastern Canada and much of Via Rail's services nationwide by blocking a key artery in southern Ontario.

CN announced it is temporarily laying off about 450 workers at its eastern Canadian operations.

"On all sides, people are upset and frustrated. I get it," Trudeau said on Tuesday. "It's understandable, because this is about things that matter — rights and livelihoods, the rule of law and our democracy."

Police have largely refrained from direct action against the blockades since the RCMP entered Wet'suwet'en territory to enforce an injunction earlier this month, where opponents of the Coastal GasLink project were preventing access to a work site for the pipeline.

More than 20 people were arrested, sparking the blockades across the country.

The blocking of economically critical infrastructure such as rail lines is an offence and will not be tolerated. <br><br>It is my understanding that CN Rail is seeking an emergency injunction this morning – which the Government of Alberta fully supports.

With files from Alex Zabjek, The Canadian Press