Opposition calling for change after documents show Tory fundraising tickets bought on behalf of the University of Calgary. 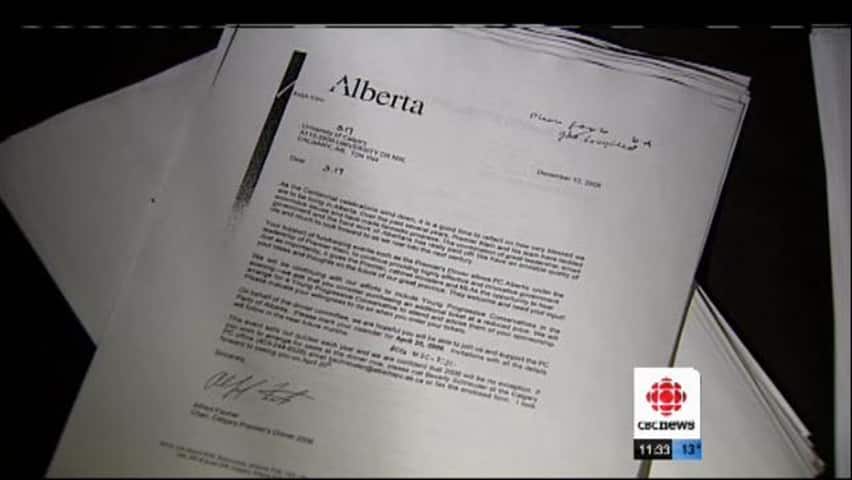 9 years agoVideo
1:25
Opposition calling for change after documents show Tory fundraiser tickets bought on behalf of the University of Calgary. 1:25

The Wildrose Party is calling for tighter restrictions on political donations after documents uncovered by CBC News show Joe Lougheed may have been breaking election laws by using money from the University of Calgary to buy tickets to Tory fundraisers.

The documents show Lougheed, a prominent Calgary lawyer and the son of former premier Peter Lougheed, bought $4,500 worth of tickets to Tory fundraisers on behalf of the U of C and then billed the university extra hours to pay for them.

University of Calgary in-house lawyer Charlene Anderson questioned and effectively put a stop to the practice.

In an email dated Feb. 16, 2012, Lougheed said he had intended to bill the university for matters related to government relations and that the cost of the tickets to the dinner was not charged to the University of Calgary.

Lougheed did not return calls to the CBC. A Toronto-based spokesperson for his law firm, Fraser Milner Casgrain, said there would be no comment because the matter is now with Brian Fjeldheim, Alberta’s chief electoral officer.

In March, a CBC investigation found several public institutions gave tens of thousands of dollars in illegal donations to the Conservatives, in one case with the party’s direct knowledge.

"This government does not seem to know the difference between right and wrong. Government taxpayer dollars cannot go towards private political parties," said Saskiw.

"The public institutions feel bullied. They feel that if they don’t provide funds to the PC party, they won’t get funding," he said.

The premier’s office denies that public institutions are being intimidated.

"The premier has been very clear … she expects everyone to abide by the rules. That includes MLAs and public institutions," said Jay O’Neill, spokesperson for Alison Redford’s office.

O’Neill says the U of C case shows that the system in place to prevent illegal donations is working.

"Recognizing the fact that there were some errors made … and they contacted the [province’s Chief Electoral Office], I think the U of C should be applauded for taking that effort... and saying that ‘I think we’ve done something wrong’ and taking steps to make sure it doesn’t happen again."

O’Neill says the current legislation has been in place for a couple of years, and that the government is working with the Electoral Office to make changes to the laws in light of questionable donations.

"We welcome it. And we want to assure that … transparency continues."