Premier Rachel Notley did not violate any rules when she called out an MLA for “mansplaining” an issue to her in question period on Tuesday, according a ruling from Speaker Bob Wanner.

Notley called out a male Calgary MLA for remark about pipelines 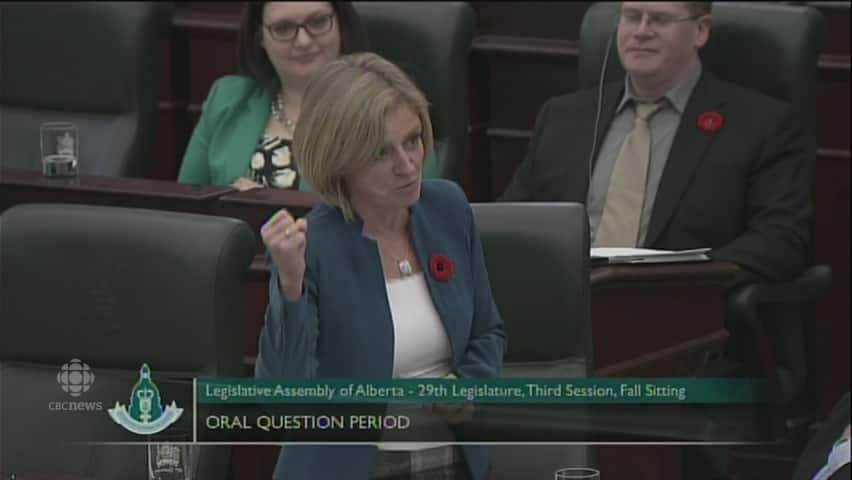 3 years ago
2:55
Alberta Party Leader Greg Clark demands that the word 'mansplaining' be banned from use in the Alberta legislature. 2:55

Premier Rachel Notley did not violate any rules when she called out an MLA for "mansplaining" an issue to her in question period on Tuesday, according a ruling from Speaker Bob Wanner.

Notley made her remark after Calgary-Elbow MLA Greg Clark asked her if she knew a Canadian pipeline to the coast would reduce global carbon emissions because it could displace higher carbon crude from Venezuela and Nigeria.

"Thank you very much, Mr. Speaker, to the member opposite for the mansplaining opportunity," Notley responded, to the laughter of NDP members. "Let me just say that I am quite familiar with the file."

Clark, who is leader of the Alberta Party, called a point of order and asked Wanner to get Notley to apologize and withdraw the remark.

"The new word that I think that we should declare unparliamentary in this house, Mr. Speaker, is 'mansplaining,' " Clark said. "It is a term that is essentially accusing me, Mr. Speaker, of sexism."

The exchange prompted Justice Minister Kathleen Ganley to read a definition of mansplaining into the record.

"Just because sexism is polite, it doesn't make it not sexism," Ganley said.

Wanner took a day to review the exchange. He ruled there wasn't an issue with the word, as a word that is unparliamentary in one context may be fine in another.

"I would, however, caution all members about characterizing language in responses, such as saying 'mansplaining,' " Wanner said. "Tone can be as disrespectful as are certain singular words."

Wanner added that he will intervene if he hears sexist or offensive language. He said he had heard a lot of heckling directed towards Infrastructure Minister Sandra Jansen.

"While I did not intervene at the time, I certainly will intervene in the future if that kind of behaviour persists and is continued," he said.