Have you ever just wanted to have a pillow fight in the middle of a busy intersection? Around a dozen Edmontonians certainly have.

Event led to a warning for stunting by Edmonton police 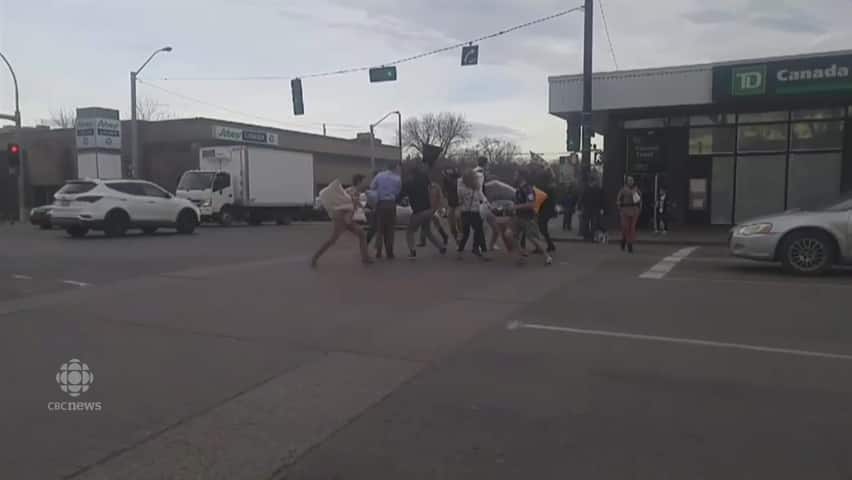 4 years ago
0:36
Evan Sveinson and a few friends decided to take pillow fighting to the streets of Whyte Avenue in Edmonton. 0:36

Have you ever just wanted to have a pillow fight in the middle of a busy intersection? Around a dozen Edmontonians certainly have.

Evan Sveinson and a few of his friends orchestrated an Edmonton pillow fight on Nov. 5 — the group split in half and lined up on either side of various intersections along Whyte Avenue.

Once the crosswalk symbol appeared, it was an all-out war. The groups charged at one another, pillows swinging.

For Sveinson, the main reason he and his friends did this was for fun, though he hoped it had a slightly positive impact on someone's day.

"I guess part of it was to get attention, but most of it was just to have fun," he said. "Part of the reason why it's fun is because it hopefully brought a couple smiles to people's faces."

Sveinson said the reaction was actually quite polarizing. "Some people were not happy with us," he said. "[They] honked their horns.

"[But] most people just kind of laughed and pointed."

Sveinson said it also ruffled the feathers of the Edmonton Police Service. After the final battle, the group was walking toward their cars when they were approached by a police officer who was not happy with their actions.

"[She] basically told us that it was wrong, it was illegal, and it was dumb," Sveinson said. "She told us we needed to use our heads and to not do it again."

The group was almost stuck with a $500 stunting ticket. "Luckily, she didn't [give us a ticket], she just gave us a warning," he said. "But yeah, she wasn't very happy about it."

EPS did not respond to CBC's request for comment in time for publication.

Despite discouragement from EPS, Sveinson said he and his friends may have a second public pillow fight. "I'm pretty positive we'll do it again because it was fun," he said.

He said his friend was inspired by the Edmonton snowball fight that was organized by Make Something Edmonton. If the interest in the pillow fight grows, the organizers may try to move it to an open area in the city.

"It would be really cool if we could do it at the legislature grounds or somewhere in a park," Sveinson said. "Obviously a police officer wouldn't be as opposed to that, so if we could do it in some big public place with hundreds of people, that would be a ton of fun."