Edmonton was one of 250 communities worldwide to take part Saturday in the People's Climate March.

Hundreds showed up for the Edmonton march, one of many around the world 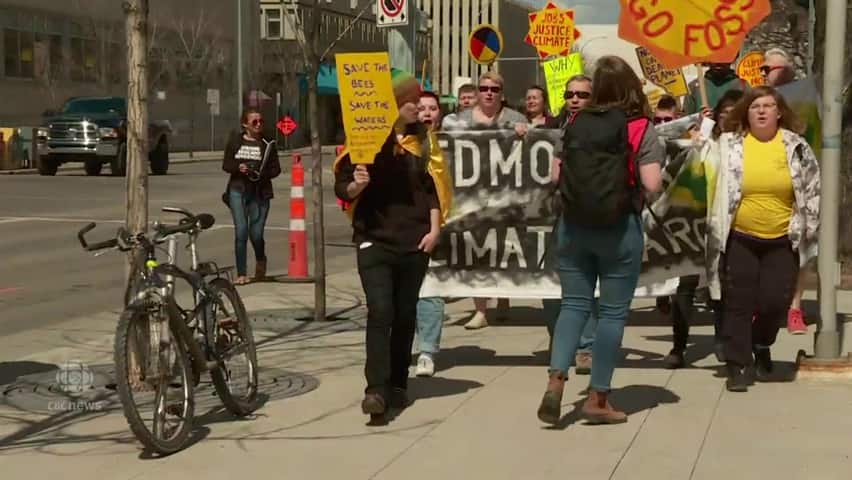 4 years ago
1:05
Edmonton was one of 250 communities worldwide to take part Saturday in the People's Climate March. 1:05

Edmonton was one of 250 communities worldwide to take part Saturday in the People's Climate March.

Around 200 people marched from Churchill Square to the Alberta legislature for the event, which called for action to combat climate change.

The main march was held in Washington D.C. and was planned to coincide with the 100th day of Donald Trump's presidency. Around 100,000 people are expected to participate in coinciding marches worldwide.

Edmonton march organizers said Canada should be doing more when it comes to climate change and transitioning to a renewable energy economy.

"The climate crisis, it's really critical right now. To sit around and do nothing is not really an option," organizer Hannah Gelderman said.

"It's quite scary when you look at the science, to be honest. For me, that's compelling enough to get out there and be doing stuff and be organizing and doing whatever things I can in whatever way to work towards solutions."

Bouchier said she wanted to use the event as an opportunity to share teachings from her northern Cree nation.

"If you've been raised to have a deep regard and respect for Mother [Nature], then you would respect our Mother Earth automatically," she said.

"You would realize that everything that you do to her affects us, human beings, and affects all life forms. When we contaminate the water that she holds for us to drink, we contaminate ourselves."

With files from Zoe Todd