As COVID-19 cases spike in Edmonton and AHS confirms an outbreak linked to the city's largest shelter, Pekiwewin organizers want a plan to prevent the virus from sweeping through the camp. 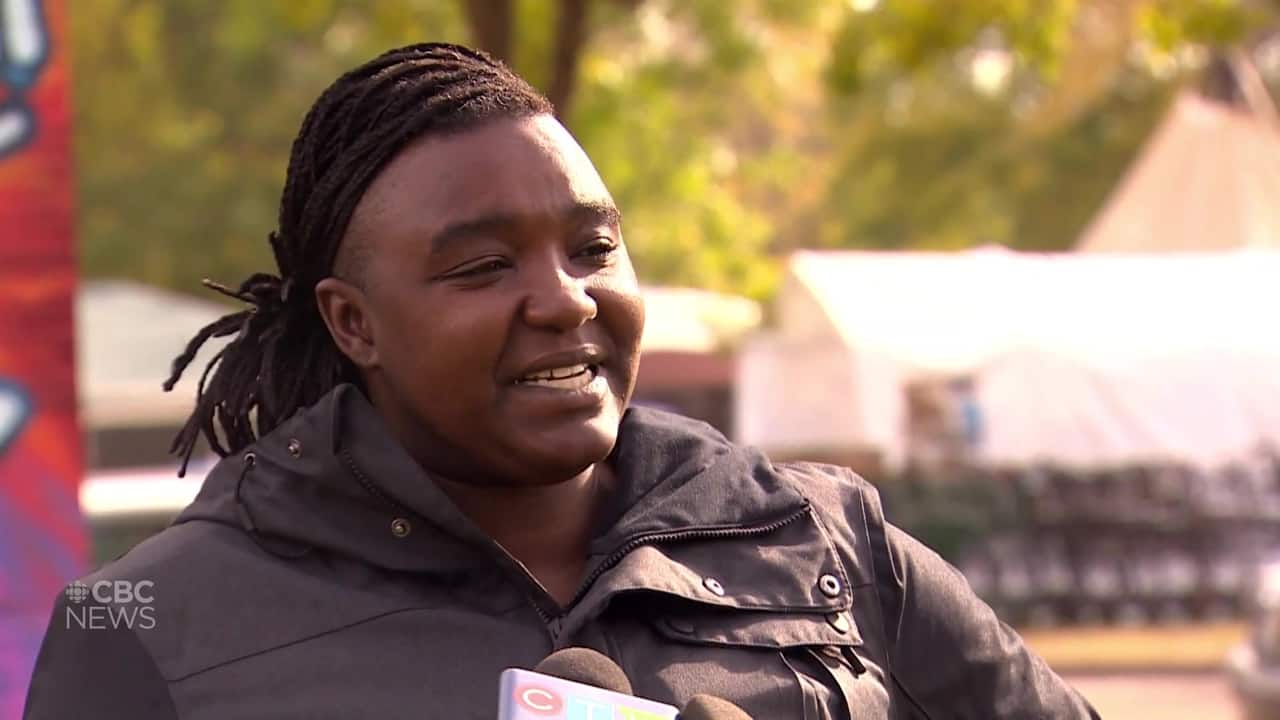 With COVID-19 cases spiking in the city and Alberta Health Services confirming an outbreak linked to Edmonton's largest shelter on Wednesday, Pekiwewin organizers want the city and province to take action to prevent the virus from sweeping through the camp.

At a news conference Wednesday, organizers called for Alberta Health Services to put up a fence around Pekiwewin to create a single entrance, making it easier to screen people for symptoms as they arrive. Shima Robinson, the camp's media liaison, said a medical professional from an inner-city agency should be assigned to the camp.

Pekiwewin is well stocked with masks and hand sanitizers, Robinson said, and there are no known cases among organizers or residents.

"We've reached out to AHS. We're in preliminary talks about having there be testing onsite, screening onsite. It's imperative that that happen," Robinson said.

AHS confirmed an outbreak at the Hope Mission main shelter on Wednesday, which hosts upwards of 200 people on any given night. Six people, all shelter clients, have been linked to the outbreak.

"Our preparedness for the eventuality of a COVID-19 outbreak needs to be seen to," Robinson said. "That is a completely participatory and cooperative endeavour. We can't do it alone. I think the city knows that. I think AHS knows that. So what we're going to do is develop a plan and implement it."

In a statement, the city said it has raised concerns about the potential for an outbreak and the impact cold weather may have on sanitation at the site.

"These safety concerns increase the urgent need for a coordinated plan to wind down the encampment peacefully," said Geoff Grimble, a city spokesperson.

Organizers double down on free transit

During Wednesday's press conference, Pekiwewin organizers affirmed their intent to remain at camp indefinitely so long as there is a need, while redoubling their demand for free transit.

It's been two months since the first tents and teepee went up on a patch of green space just across from Re/Max field. In that time, Pekiwewin has prompted a public reckoning with the policing of homelessness as it presses city council to keep housing atop its list of priorities.

Grounded in a commitment to Indigenous ceremony and anti-police violence, the volunteer-run camp offers daily meal servings, medical supplies, donations and elder-led prayers to about 250 people sleeping rough on site.

Organizers have retooled their list of demands since Camp Pekiwewin, the Cree word for coming home, went up in late July but have remained steadfast in their call for free transit.

Transit officers issued an average of 15 tickets per day to people without a fixed address in 2018, according to data published by Edmonton's Student Legal Services. The tickets, from trespassing to fare evasion, translate to about $723 for every person experiencing homelessness in the city, the report noted.

"I would call it infinitely realistic to say that transit should be free," Robinson said. "People cannot maintain their housing, if they're transitioning from houselessness into housing or if they're below the poverty line, if they're unable to be mobile in the city — to get to their work, to get to see their loved one."

Mayor Don Iveson said the city's study of the issue found wiping out fares across the transit system is unfeasible. Instead, he says, the city offers free passes to 600 people experiencing homeless and subsidized passes to low-income riders through transit programs.

"Free transit is not on the table," Iveson said. "I think the bigger issue for people experiencing homelessness when I spoke to them personally at the camp was finding them housing."

Iveson has repeatedly said the city is working on an expedited timeline to end homelessness by early November. This week, that plan got a boost from the federal government, which pledged $1 billion in part to retrofit hotels and motels into temporary housing units.

Pekiwewin organizers say with the right coordination, the camp can be part of ensuring the plan hits its goal. Since late August, Homeward Trust and other inner-city agencies have offered direct housing outreach services to people at Pekiwewin on a daily basis.

The outreach comes at a time when the economic upheaval generated by the pandemic has pushed more people into homelessness as agencies struggle to keep up with demand. As of this month, data compiled by Homeward Trust shows there are 1,959 people experiencing homelessness, a 250-person spike compared to this time last year.

I would call it infinitely realistic to say that transit should be free. - Shima Robinson, Pekiwewin organizer and media liaison

In a statement, Homeward Trust says it's engaged 158 people from the camp, 43 of whom are working directly with its housing team.

"It's important to hold the governing individuals' feet to the fire so that they see the plan through because the City of Edmonton has been planning to end homelessness for 15 years," Robinson said. "We're looking at that track record and seeing there's a lack of follow-through."

As the city plans to enforce a Monday deadline for organizers of a homeless encampment in Wilbert McIntrye Park to pack up their tents, it has yet to issue a similar notice to Pekiwewin.

Grimble, the city spokesperson, said displacing 200 people — roughly the number of people at Pekiwewin — without careful planning could result in significant impacts on health and safety.

"We continue to maintain a dialogue with the organizers in working towards a peaceful resolution and closure of the camp," Grimble said.

Along with COVID-19 measures and calls for free transit, Robinson says organizers are focused on making the camp winter-ready. Ideally, she says, the city will hit it's 10-week goal to end homelessness and, with it, end the need for Pekiwewin. But until then, there are no plans to take down camp.

"I just know the camp is here now. The volunteers and organizers are doing the work on the ground here now," she said.