Rise of organic farming fuelled by concerns about use of glyphosate, other chemicals

Eldon and Brad Kebernik are busy tilling their land near Barrhead, Alta., preparing the soil in order to seed oats without using any chemicals to control weeds or pests.

Eldon and Brad Kebernik are busy tilling their land, preparing to seed oats without using chemicals to control weeds or pests.

Father and son rely on a rotation system on their farm near Barrhead, Alta., to harvest crops without herbicides and pesticides.

"It's a passion for me to look after the soil," said Eldon Kebernik, who transitioned to organic farming in 1997.

"I've had a sentimental attachment to the farm since my youth, and it's something I never wanted to stray away from."

Around 240 Alberta farm operations switched to organic between 2014 and 2017, according to data from the Canada Organic Trade Association.

The growth is linked to a rise in consumer awareness, Kebernik said, as more people educate themselves on the potentially harmful effects of chemicals, such as glyphosate, in the food chain.

"Families are concerned about their children, and what they're consuming themselves," he said. "I certainly believe that the market will grow." 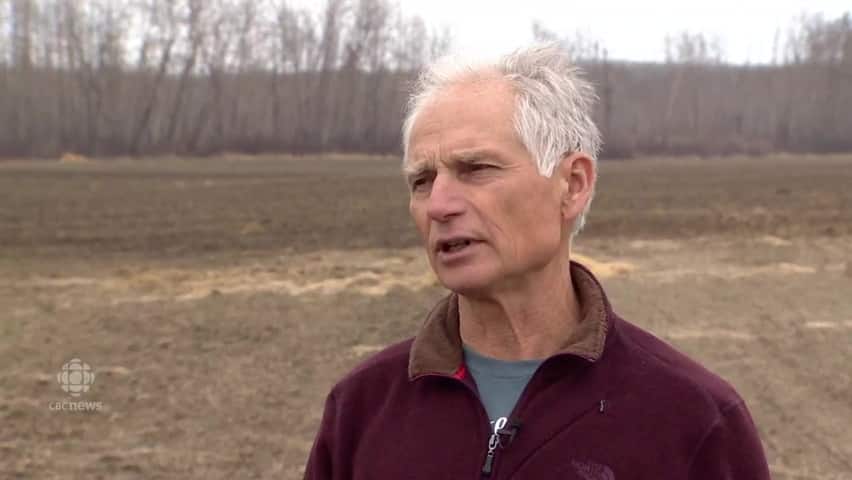 'It's proven that it has worked'

2 years agoVideo
2:28
For more than 20 years, Eldon Kebernik has been growing organic oats and takes pride in knowing his crop is chemical free. 2:28

Glyphosate, the main ingredient in Monsanto's Roundup, is the most commonly used herbicide in the world, and the subject of an ongoing campaign by the Canadian Association of Physicians for the Environment (CAPE).

A jury in the United-States recently awarded damages to a man whose cancer was linked to repeated exposure to the herbicide.

The case has prompted questions about the long-term impacts of glyphosate on humans, said Randall McQuaker, pesticide director with CAPE.

"They raise red flags about what health risks could be associated with chronic, lower-level exposure," McQuaker said.

Health Canada reviewed its position on glyphosate in January, and said the scientific evidence used to approve the continued use of glyphosate in weed killers was sound.

But CAPE wants independent scientists to review the studies that Health Canada relied on.

The group is advocating for a ban on non-essential uses of glyphosate in agriculture, as well as for personal use.

"We think that we need more information so that we can document some of the concerns associated with those low-level chronic exposures," McQuaker said.

"In the meantime, it makes sense to restrict or avoid exposure to glyphosate as a public health policy."

For more than two decades, Kebernik has been using a combination of tilling and crop rotation to maintain healthy soil for his oat crops.

"We're living proof that it is sustainable," he said.

After one or two seasons of growing oats, the land is reverted to a crop that increases the fertility of the soil, such as alfalfa.

The alternate crop is grown for up to seven years, until the soil is enriched enough to again support oats.

"It builds the soil up, encourages more biodiversity in the soil," said Kebernik. "It also combats the weed population, and it breaks the disease cycle."

Each field is tilled twice before sowing, as another means of weed control.

Brad Kebernik, 25, will eventually take over from his father, and wouldn't consider farming any other way.

"It's just a part of who I am, really," he said. "I see the monetary reasons for doing it, and the sustainability reasons as well."

Organic crops are increasingly sought after by food companies, who want to offer a glyphosate-free option to consumers, said Stan Smith, president and co-founder of One Degree Organics.

"People are more intentional about choosing healthy and quality food," he said. "They're more informed than they used to be, and that's what's driving it."

The Abbotsford, B.C., company focuses on transparency, and each ingredient in their products can be traced back to the farm where it was grown through the labelling on the package.

"When we're looking for organic ingredients, we always select family farms," said Smith, who has partnered with the Keberniks since 2012.

"We choose family farms because for them, it's a way of life."

The organic food and beverage market in Alberta, Saskatchewan and Manitoba was collectively valued at more than $850 million in 2018 by the Canada Organic Trade Association.

With more and more producers wanting a piece of the pie, the future of the industry is bright, said Smith.

"Society has begun to recognize that there's value in ensuring that toxins are being eliminated from food," he said.

"That's giving an opportunity for food producers to step up and get into a position where they can provide food in channels that we didn't used to have."