After a three-day move, the heaviest load in Alberta history arrived at the work site east of Fort Saskatchewan where it will turn propane into recyclable plastic. 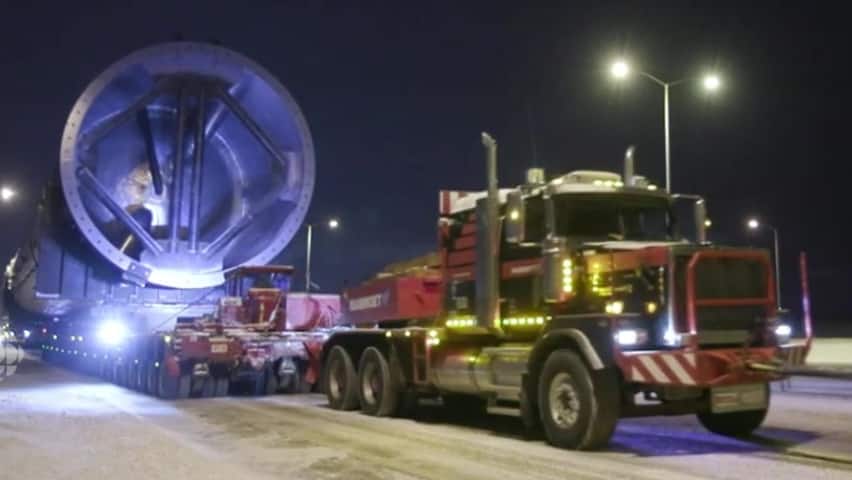 The heaviest load ever transported over Alberta's highways has arrived at its destination east of Fort Saskatchewan where it will eventually turn propane into recyclable plastic.

The massive piece of equipment, which looks like a pipe, was moved by truck from Edmonton to Inter Pipeline's Heartland site over three days this week.

A large crane will move the propane/propylene or P.P. splitter into a tower position.

The transportation of the 800,000-kilogram piece of equipment led to traffic disruptions, but also created a scene that demanded attention of people as it passed. The companies involved said it was a smooth move.

"We saw children in the windows of schools watching this go by. It was actually phenomenal," Bernard Perron, senior vice president of Inter Pipeline's projects and operations services, said Thursday.

"It created an amazing buzz. I think that we were all amazed as to how mesmerized the entire province was and we got incredible feedback and support."

Once complete, the Inter Pipeline facility will convert propane from natural gas into polypropylene that can be used for products like medical equipment, currency and active outerwear and apparel.

The splitter was fabricated at Dacro Industries in Edmonton over the course of a year.

"This is the largest by volume vessel we've ever created," said Brian Purnell, a director at Dacro Industries. "We've created a larger diameter and a little longer but nothing in terms of overall size. This is the biggest we've done and we're very proud of it."

Alberta Premier Rachel Notley visited the petrochemical project outside Edmonton Thursday to tout some of big things happening in the industry.

Calgary-based Inter Pipeline's $3.5-billion Heartland Petrochemical Complex in Strathcona County is one of the first projects to receive assistance under the first round of the province's Petrochemicals Diversification Program.

In 2018, Notley renewed support for the program, committing a total of $1.1 billion in future royalty credits for approved projects that will build manufacturing facilities to turn ethane, methane and propane into more valuable products.

'Now that is big'

"That propylene is going to be moved to another part of the plant where it's going to be processed and turned into polypropylene, or plastics," Notley said during the news conference.

"We're just cooking with gas up here in northern Alberta. And that plastic is going to be used around the world to make a wide range of products, from kids' toys to auto parts and containers to electronics."

The massive splitter is an example of what Alberta can achieve when the government "supercharges energy upgrading," Notley said.