Northlands hopes to reinvent itself with $165M in renovations

Northlands plans to reinvent itself as a national sports tournament and festival centre with $165 million renovations.

'We listened closely to what our city needed,' says Northlands CEO Tim Reid

Northlands plans to reinvent itself as a national sports tournament and festival centre, if it gets approval and funding for $165 million in renovations.

The proposal includes major renovations to all three of its principle buildings to create a multiplex with seven ice surfaces, an outdoor festival and concert space and a 5,000 seat multi-purpose venue.

The changes will also bring an end to horse racing at Northlands, which hopes to complete the renovations by 2020.

Edmonton Mayor Don Iveson and Northlands CEO Tim Reid unveiled the long-term strategic plan for the future of the property on Wednesday.

With the Edmonton Oilers and major musical acts set to move to the new downtown arena next fall, Northlands had to reinvent itself, Reid said.

The plan is to adapt in a way that serves the existing needs of the community.

"We listened closely to what our city needed and what we could realistically provide," Reid said.

Northlands has launched an online survey to get feedback on the plan. After that, the group will approach the provincial government and city council for funding.

The ambitious plan proposes to spend $85 million to turn Rexall Place into the 'Northlands Ice Coliseum,' with seven ice surfaces. 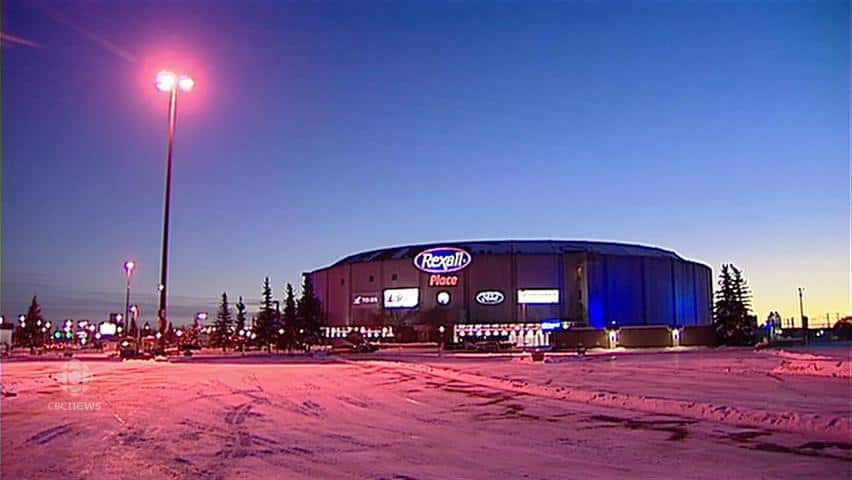 From the archives: Northlands Coliseum to Rexall Place

5 years agoVideo
1:15
An archival look at the legacy, history and future of the arena. From construction in 1972 , the glory days of the Edmonton Oilers and now proposed $85-million renovations. 1:15

Reid said the hockey centre can become a place for young players to hone their skills in the same place where The Great One played, and turn Edmonton into a national tournament centre.

Iveson said a facility with two ice sheets generally costs the city between $30 million and $40 million to build. He said housing all those rinks under a single roof might also offer operating savings.

The city has a number of aging arenas that are near the end of their lives and will need to be replaced soon.

"There's a pretty obvious upside to looking at doing this," Iveson said.

If Northlands moves ahead with the Ice Coliseum plan, Reid said free parking will be offered. He said revenue may be made up by leasing space on the concourse level.

Northlands also announced horse racing will end at the end of 2016.

The plan is to convert the racetrack and casino into a festival site. The land will become a public park used to host festivals and concerts for 30,000 to 140,000 people.

Reid said the space will serve as a park when it`s not booked for major events.

Northlands has approached a consortium of festivals to get feedback about the best use of the space and what should be included.

"I think it would be ridiculous to not want options for the future," said Edmonton Heritage Festival Association president Tracy Deslaurier. "We have to consider the size of the city and the response to our festival and how we want to grow in the future."

Reid said local community leagues have also been consulted about how much noise and traffic the neighbourhood is willing to put up with.

Coun. Tony Caterina, who represents the area, said there are often neighbourhood complaints about K-Days and Sonic Boom Concerts. But he said Northlands has always been willing to work with neighbours to address those concerns.

"Preliminarily, what we hear from the community is that they're extremely excited about the fact that this is going to be re-purposed," Caterina said.

The plan also calls for a major renovation to turn Hall D of the Expo Centre into a 5,000-seat venue for lacrosse, rodeo events, minor hockey championships, and mid-sized concerts. Northlands will need to raise the ceiling 16 metres to accommodate the expansion.

Reid said during consultation on Rexall Place the community said the city is lacking a 5,000-seat venue, and that Edmonton was missing opportunities for events of that size.

The cost of that renovation is pegged at $35 million.

Construction could begin as early as 2017

Council is expected to debate the plan on March 15.

Iveson said the city will complete its own analysis of the Northlands plan before council commits any money.

"My council colleagues and I are looking forward to hearing more details and listening to what Edmontonians think of the Northlands proposal," Iveson said.

Each project will have to be weighed against other city priorities in a time when resources are tight, he said.

If Northlands can get the funds it needs, construction on the outdoor and indoor event spaces could start in 2017, and renovations on Rexall Place could begin in 2018.