Alberta's chief medical officer of health did not introduce any new measures Friday despite announcing a record 1,155 new cases of COVID-19.

Alberta is not bringing in any new health measures, despite Friday's announcement of a record 1,155 new cases of COVID-19.

But Hinshaw said officials are waiting to see if measures announced one week ago have an effect on case numbers before pursuing further restrictions to slow the spread.

"Of course, I am concerned," she said. "The measures that we have put in place over the past several months may have somewhat slowed the growth, but they have not bent the curve as much as we need to.

"And we do need everyone to pull together to follow all of those measures to the letter, or unfortunately we will need to put in additional restrictions."

Alberta has one of the highest infection rates in the country, but has among the fewest restrictions.

"This weekend, I encourage everyone to abide by all public health measures even if you don't like them, even if they're inconvenient or even if you don't agree with them. We must all do our part to bend the curve, prevent the health-care system from being overwhelmed and prevent more restrictive measures from coming into effect." 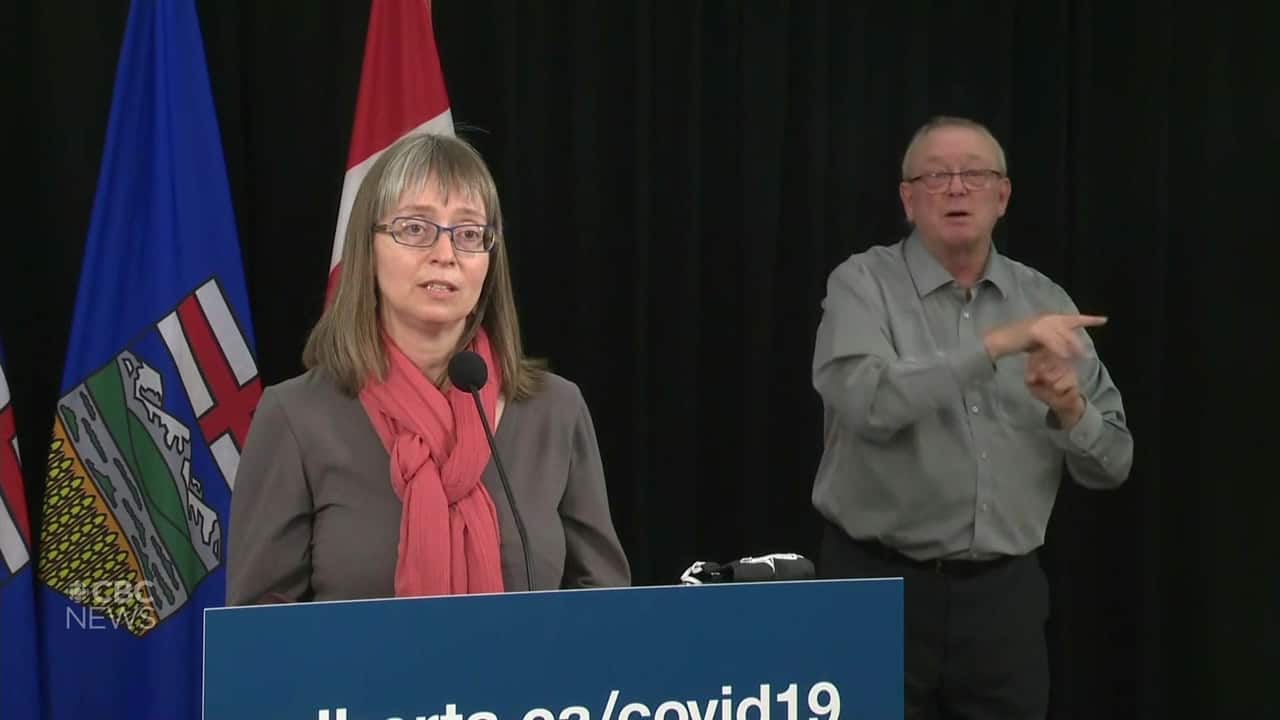 There were 11 deaths new deaths attributed to the disease, bringing the total number of deaths to 462.

Hinshaw dismissed the idea that only the elderly are vulnerable, pointing out two individuals in their 30s were among the deaths announced this past week. She also made it clear that people with co-morbidities include a significant number of Albertans of all ages.

"Severe outcomes are not limited just to those already at the very end of their lives, and it is a mistake to think so," Hinshaw said,

"Having a chronic medical condition is very common," she said. "These conditions include things like high blood pressure and diabetes. In Alberta, almost one-quarter of all adults over the age of 20 have a chronic condition. That is almost 800,000 people.

"When looking just at men in Alberta, more than half of men over 50 and almost 70 per cent of men over 65 have high blood pressure. That should not be a death sentence."

Currently, 310 people are being treated in hospital, of which 58 are in intensive care units.

Hinshaw said that there are 173 general adult ICU beds in the province. While 70 have been designated for COVID-19 patients, more beds can be shifted if the need arises, she said.

"Alberta Health Services manages ICU beds and staff depending on demand from both COVID-19 patients and patients with other conditions that require intensive care," she said.

"These beds can be used for many patient types. I want to assure Albertans that as more COVID-19 patients require intensive care, AHS is able to add additional intensive care capacity."

AHS has prepared more ICU beds in the Edmonton and Calgary zones to be ready if needed, Hinshaw said.

"This is where most of the capacity is likely to be required, but creating this capacity means stopping or delaying other services, and this is the impact we want to avoid."

As the pandemic continues to hammer long-term care homes, Hinshaw has signed an increasing number of exemptions to a rule that prevents staff from working at multiple facilities.

The province confirmed 22 long-term care or supportive living facilities have active exemptions to the single-site rule, an increase of seven in two weeks.

Exemptions to the rule were expected to be "extremely rare," according to a public health order signed by Hinshaw in April.

But with 76 supportive and long-term care facilities in Alberta facing outbreaks as of Friday, Hinshaw says some operators need additional staff, as workers fall sick or are forced to quarantine.

"It really is about allowing the safe care provision for all the residents' needs and allowing the workers to come to that site and support the staff that are there," Hinshaw said Friday.

Hinshaw implemented the rule in late April in an effort to prevent the spread of the virus between facilities. The vast majority of long-term care staff are part-time or casual workers, who routinely took jobs at multiple sites to make ends meet before the pandemic.

Susan Slade, vice president with the Alberta Union of Public Employees, reiterated the union's call for the government to hire more workers and take over staffing across private and public facilities, a move B.C. implemented early in the pandemic.

"I don't understand why Alberta is not looking at this approach, why they're not having consultations with the unions that are representing these members to ensure there is staffing," she said.

Slade said staff who are picking up shifts at exempt facilities worry they could end up being the source of transmission to another long-term care home or their loved ones.

"The whole situation is frightening," she said.

Hinshaw said she has heard of people who have the disease covering up their symptoms while visiting hospitals to see loved ones.

"I understand that it is hard to not be able to see a loved one or accompany them to hospital, but we must all think beyond ourselves right now," she said.

"If a provider or other member of a health care team gets sick, it means they are not available to treat patients for at least two weeks, which translates to a lack of staff to care for all patients.

"Ultimately if this behaviour continues, Alberta Health Service will have to consider limiting designated family and support and visitation even further. And that is not something we want AHS to have to do."

The number of active cases now sits at 10,655, the highest number in Alberta since the pandemic began in March.

Here is how the active cases break down in the zones:

The 11 deaths reported Friday include: