'He was on fire': 2 men hurt in blaze at Leduc County mobile home park

Two men suffered burns after a fire broke out Monday at a mobile home park southeast of Edmonton, gutting one trailer and badly damaging two more.

John Taylor was watching television Monday morning when he noticed a flicker of orange outside through the window.

Thinking his trailer had caught fire, Taylor got dressed and ran outside.

He saw a man leap off the porch of the mobile home across the street in the Sunrise Mobile Home Park in New Sarepta.

The trailer was engulfed in flames. The man was on fire.

"As I ran out the door, I made it almost to the roadway," Taylor said. "That's when I saw the one gentleman come through the porch and just jump right off. And he was head to toe, he looked like a flaming guy.

"He was on fire, and he hit the ground and he rolled a little bit and then the flames were out. And I just ran over and grabbed a hold of his hand.

"I didn't want to touch him. I knew, anywhere I touched on him, his skin was going to come off. He was in a lot of shock and had no idea how bad he was hurt."

He was so in shock. He was trying to get back in the house.- John Taylor

The man told Taylor his roommate was still trapped inside the burning structure.

The flames were already spreading to a neighbouring trailer. Taylor began knocking on doors.

As he ran from home to home, he saw the second man emerge from the burning trailer. The man escaped by jumping out of the trailer's back window and broke his collarbone in the fall.

"He was just screaming in pain from his shoulder," Taylor said. "He was just in a robe and I just grabbed a hold of the robe, and I was fighting with him, trying to get him away from the house.

'The adrenaline kicks in'

"I had to fight with him the whole way over here, he was so in shock. He was trying to get back in the house. He wanted to save his motorcycle. He just wasn't thinking."

With the help of another neighbour, Taylor took the man back to his house and waited for emergency crews to arrive

Taylor, who has spent months in a wheelchair recovering from a serious motorcycle crash, said he didn't think twice about helping his neighbours.

"Just this past Wednesday, I was told I could get out of the chair and walk around. Nobody ever said I could start running. But last night I wasn't doing any walking," Taylor said.

"I didn't think anything of it. The adrenaline kicks in and you've got a job to do and you just do it." 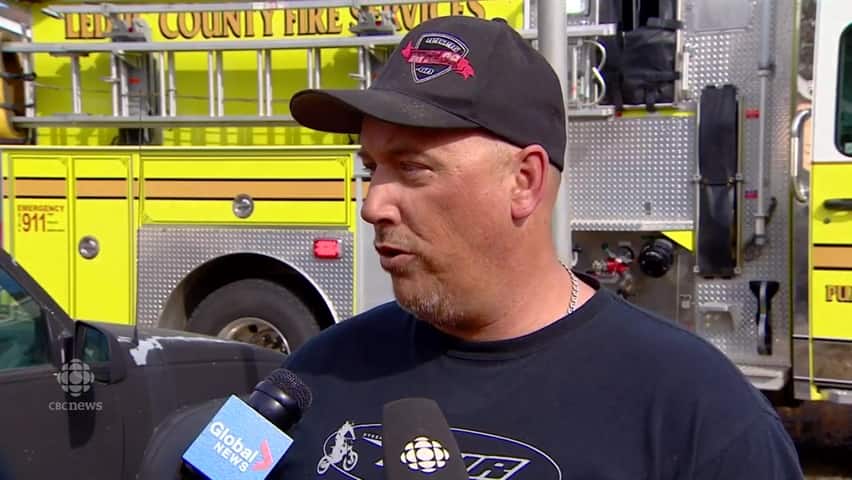 'I did what anybody would do'

Fire crews were called at around 2:30 a.m. to the mobile home park in the hamlet, about 25 kilometres east of Leduc.

"One gentleman was burned quite badly and he was taken away by STARS," said Brad Gurmin, fire marshal for Leduc County Fire Services.

"From what I heard from the guys on scene, his hair was burned and he had burns on his face and his body, all the way down to his knees.

"The other gentleman, he jumped out a back window, and he suffered some burns and I believe a dislocated shoulder."

By the time crews arrived, the fire had spread from an old trailer to the bedroom of a trailer on a neighbouring lot and was beginning to melt the siding on a third structure.

'They heard the crackling'

Residents of the three trailers, including the two men and a young family, had escaped before firefighters arrived, and were being cared for at a neighbour's home, Gurman said Monday.

"Everyone else was out of the structure, the mother and father and child, they heard the crackling of the fire and they got out," Gurmin said.

The two men injured in the fire were both in their 40s, Gurmin said.

"The guy who was really burned was sitting inside the house on the couch and the ambulance arrived and they contacted STARS.

"STARS air ambulance landed on the highway and took the one fellow away."

Firefighters worked to prevent the flames from spreading to neighbouring properties. The old trailer could not be saved, said Kevin Lefebvre, fire chief for Leduc County Fire Service.

"The trailer in the middle there was fully involved, vehicles were burning, there was popping from propane tanks and tires and everything else, and thick black smoke," Lefebvre said in an interview from the scene.

No one else was injured in the fire, Lefebvre said. It appears the fire originated in the kitchen but the cause remains under investigation.

It was difficult to contain the blaze because trailers are highly flammable.

"It's almost like a cardboard box," he said. "It's very lightweight construction with not a lot of interior partitions, so they burn very quickly. The vinyl siding doesn't help."

Fire investigators will return to the scene later Monday to examine what remains of the structure, Gurmin said.

"We don't know if their smoke detector didn't go off or if they didn't have one. We can't really tell because the building is pretty much burned.

"It happened at 2:30 in the morning so, who knows, they were probably both sleeping."

With files from Natasha Riebe