MP Rathgeber refuses to be 'cheerleader' and quits Tory caucus

A backbench MP from Alberta who has not been afraid to criticize his own government resigned from the Conservative caucus last night, citing the "gutting" of his private member's bill as the last straw in his discomfort with Stephen Harper's government. 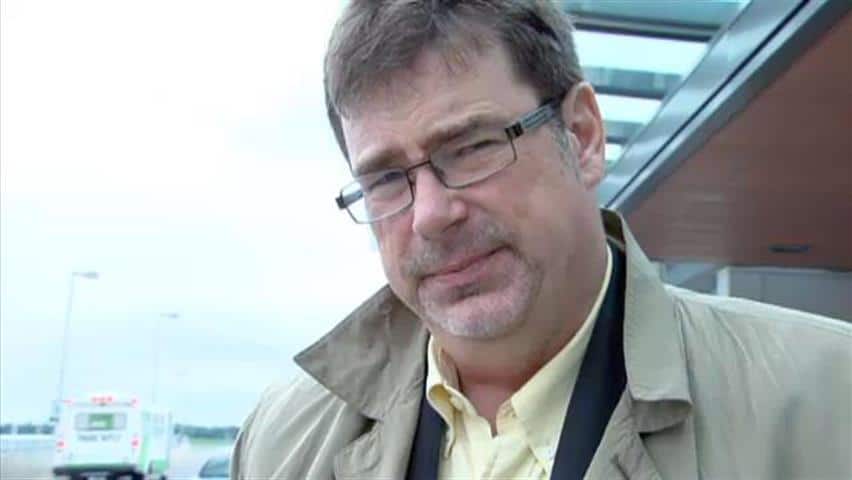 A backbench MP from Alberta who is known for criticizing his own government resigned from the Conservative caucus last night, citing amendments made to his private member's bill seeking public disclosure of the expenses and salaries of highly paid public service workers.

"I'm doing what I need to do for myself and for my constituents," Brent Rathgeber told CBC News when reached at the Ottawa airport on Thursday morning. "I don't think that I can continue to represent them when I am told how to vote, told what to speak."

Rathgeber explained that his discontent has been evolving for more than a year, dating back to his decision to write about his disapproval of the Harper government's "opulence" on his blog.

In recent months, he was one of the Conservative MPs who spoke out against the government's attempt to curtail his caucus colleagues' right to speak in the House of Commons about sex-selective abortion.  As the Senate scandal has unfolded, he has continued to speak to reporters about his frustrations.

"I support the government generally but I don't support it unequivocally," he said. "That created problems for me."

Changes made Wednesday night in a Commons committee to his bill – C-461, also known as the CBC and public service disclosure and transparency act – became the final straw.

The bill sought public disclosure of expenses and salaries of government bureaucrats and senior CBC employees or managers earning more than $188,000 a year.

Amendments passed as a result of the Conservative majority on the committee raised that level to $444,661.

Rathgeber pointed out that while not one of the Tory committee members spoke about the need for amendment at committee, all seven of them voted in favour of the changes the government wanted.

What does it mean to quit caucus?

Unless they run as an Independent, MPs and senators sit and work together in teams along party lines, in what's referred to as a "caucus."

Resigning from caucus will change Rathgeber's seat in the House of Commons and see him moved away from the government benches to the other side. His decision to leave the caucus may be followed by a decision to rescind his party membership entirely.

He will no longer participate in weekly caucus meetings, and Independent MPs do not usually get to sit on Commons committees. He has served as a Tory on the Justice and Library of Parliament committees, but did not hold a cabinet or parliamentary secretary position.

His ability to speak in the House of Commons will no longer be determined by the Conservative leadership in the Commons. As an Independent, he can seek to be recognized by the Speaker to participate in debates and to ask questions at the end of question period.

"It's a hollow shadow of the bill it once was, and to me was sort of evidence of a bigger problem in government," he said, adding that he doesn't believe the Tory members of the committee had a problem with the original bill, but gutted it on orders from the top.

Bill C-461 also sought to increase disclosure at the CBC by making it more open to access-to-information laws.

Private members' bills differ from government legislation in that they are supposed to be an expression of something the individual MP wants to champion. While it's not unusual for these bills to be amended – and often improved – at committee, it is unusual for MPs from the bill sponsor's own governing party to use their majority on the committee reviewing the legislation to make changes the MP who proposed the bill didn't originally intend, or support.

Normally, if a government doesn't support a private member's bill, it encourages its MPs to vote it down before it reaches committee. However, it doesn't usually whip — or force — its caucus to vote a certain way on these kinds of bills.

"The more popular feeling certainly at PMO and the whip's office is that caucus members should essentially be cheerleaders for the government and spread the government's message as opposed to being some sort of legislative check on executive power," Rathgeber said Thursday. "I don't accept their premise."

Plans to support many government bills

The Alberta MP said he would not resign his seat to run in a byelection, an idea floated by PMO communications director Andrew McDougall on Twitter in the wake of his announcement Wednesday night to leave the Conservative caucus.

Rathgeber said he supports Prime Minister Stephen Harper generally and that he expects he'll vote with the government on many of its bills, but now has the freedom to choose whether to do so.

"I barely recognize ourselves, and worse I fear that we have morphed into what we once mocked."

"My constituents simply do not care what somebody, who they hope will never become Prime Minister, did or didn’t do seventeen years ago." [in reference to recent question period attacks on NDP Leader Tom Mulcair]

"To say that we are somehow better than the other guys is similarly woefully inadequate."

"I still support and greatly respect the Prime Minister; I continue to question the decisions and actions of many of his advisors."

"I will assess each bill and each motion on a case by case basis," he explained.

He said he wasn't sure if any of his former colleagues would leave caucus, but that he had been hearing support for his decision from some, including other Tories who had been speaking out recently, during a period he characterized as the caucus "backbench spring."

"I suspect although there's angst in the Conservative backbench given some of the scandals that have evolved in the last month or so, I think generally the people still see themselves as comfortable there," Rathgeber said.

"Socially I've been slightly ostracized by some of my now-former colleagues who didn't appreciate the fact that I took my role as a backbencher as being a constructive critic rather than as a blind cheerleader."

"I'm not asking other members to join me," he added.  "You'd have to ask them. I'm not recruiting."

Rathgeber used a lengthy blog post on Thursday morning to explain his decision in full.  He's also holding a press conference in his Edmonton constituency and speaking to local media later Thursday.

The Alberta MP first announced his decision to leave the Conservative caucus Wednesday evening on Twitter.

"I just notified the Board of Directors of the Edm-St. Albert CPC Association and the Speaker that I have resigned from the CPC Caucus," he tweeted.

"My decision to resign from the CPC Caucus is because of the Government’s lack of commitment to transparency and open government."

In a blog posting last year, Rathgeber said that people complained to him about the limousine expenses of Tory cabinet ministers when he travelled to Saskatchewan for a funeral.

Last month, he also welcomed a ruling from Speaker Andrew Scheer that allowed MPs to speak more freely in the House of Commons. Scheer made the ruling after B.C. Conservative MP Mark Warawa complained that MPs could only speak during member's statements if they were first approved by party whips.

Dissenting blog posts in particular have not been well-received during Harper's time as prime minister. Speaking out and writing criticism online contributed to former Conservative Garth Turner's removal from the Tory caucus less than a year after the 2006 election.

Dimitri Soudas, the prime minister`s former spokesman who is now head of communications for the Canadian Olympic Association, got in on the act, suggesting Rathgeber's dissatisfaction was apparent from the day he was elected in 2011.

"Pattern of behaviour was obvious it was coming to this," Soudas tweeted.

Liberal MP Scott Andrews, on the other hand, expressed support for Rathgeber.

"Kudos to you, for taking the high road and standing up for your convictions," the Newfoundland MP wrote. "This place [House of Commons] need more like you."

Rathgeber's former colleague Warawa told reporters Thursday he was "shocked" by the news, adding that Rathgeber will find it "very difficult to accomplish much" by himself.

"It's important to be part of a team, " he said.  "Everyone has joys and frustrations in Parliament. No one gets his own way all the time."

"He’s reflecting the views of many staunch Conservative supporters who say we came in with this mandate to do better than the Liberals, to clean up the scandals from sponsorship and Gomery and clean up the Senate. And somehow we’ve arrived at this place where in the very heart of the prime minister’s own office his judgement was so lacking that potentially illegal activities went on trying to cover up this kind of scandal," Cullen said.

"It’s personal for him," he added.

With files from CBC's Laura Payton, The Canadian Press