Mountie only guilty of 'not using enough force,' judge says in assault trial

An Alberta provincial court judge said the only thing RCMP Const. Brendon Plamondon is guilty of is "not using enough force" when he arrested a 15-year-old girl. 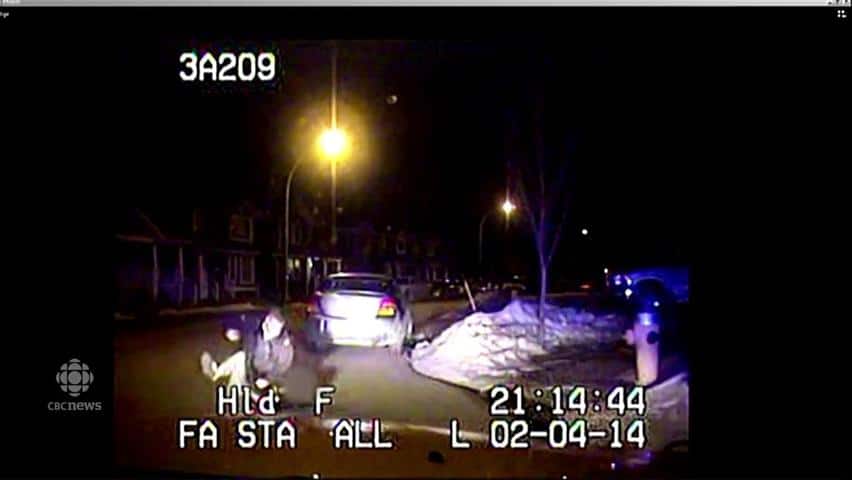 5 years agoVideo
1:38
Const. Brendon Plamondon was charged with assault following the arrest in Fort Saskatchewan. He was found not guilty Monday. 1:38

An Alberta provincial court judge said the only thing RCMP Const. Brendon Plamondon is guilty of is "not using enough force" when he arrested a 15-year-old girl.

The incident that led to the criminal charge occurred on a Wednesday night around 9:30 p.m. in April 2014. RCMP received a report that a group of young people was setting fires on a residential street in Fort Saskatchewan.

Plamondon was just a few minutes away and responded to the call.

He drove onto the street and saw three girls standing around the glowing embers of a fire.

At the officer's assault trial, one of the girls testified she and her friends had sprayed a book with hair spray, then used a lighter to set it on fire.

"We just decided that it'd be fun," she said.

The teens noticed the RCMP vehicle and began to walk away. Plamondon ordered them to stop.

Two of the girls complied, but one 15-year-old yelled back at the Mountie.

What happened next was captured on the officer's dashboard video camera, which the judge released to CBC News upon request.

Plamondon ordered the girl, who weighs about 100 pounds, to get her hands out of her pockets. She refused, and he approached her with handcuffs.  A one-minute, 12-second physical struggle ensued that the judge described as "ugly."

"It is a situation when a stronger, larger man is using his superior strength on a small, young girl," the judge wrote in her 13-page decision. "We are not used to seeing this type of action."

However, she said, "the viewing cannot be taken alone. All surrounding circumstances must be considered."

The teen, who cannot be identified, testified that the officer "just walked up to me and grabbed me, and that's when I kind of moved away, and then he body-slammed me into the ground."

The video shows the constable crouched over the teen. He lifts her upper body by her coat, then drops her back onto the ground, face down. She twists onto her side and the officer hits her in the arm. Then she begins kicking at him, with one of the kicks sending his glasses flying.

Plamondon finally gets the girl under control and puts her in handcuffs.

Even with blood pouring down her face, the girl admitted she kept verbally abusing the constable.

The judge said the teenager was verbally aggressive, unco-operative and non-compliant. She believes the girl "tailored" her testimony to match the video.

An expert in police use of force who testified for the defence told the court Plamondon did not use excessive force to arrest the girl.

"The accused at no time used excessive force. If he is guilty of anything, it is of not using enough force, thus prolonging the event."

Plamondon has been suspended with pay since January.

An RCMP spokesperson said an acquittal doesn't automatically mean the officer will return to active duty.

Plamondon's future is still under review and he may have to face a disciplinary board.

The constable, with 13 years experience, was convicted in 2011 after pleading guilty in a previous assault case that occurred while he was off duty.