The fire at 78th Street and 26th Avenue was reported at 11:02 a.m., and escalated to a two-alarm fire seven minutes later.

Residents knocked on doors to alert others of danger

Eight suites in the building at 78th Street and 26th Avenue were damaged by fire and others suffered smoke and water damage, deputy fire chief Scott MacDonald told reporters.

"It was fully involved when we showed up," MacDonald said. "The crews did a great job. It's a hot day, and it was a good save."

Everybody who lives in the building is accounted for and there were no injuries, fire officials said.

Irene Grafil, who owns a unit in the building, said she felt sick about the fire. She and her husband, who moved to Canada from the Philippines, bought their home two years ago.

Grafil said firefighters hadn't allowed her back in for a look at her unit. She was worried about what she might find.

"I see the water is flowing from our porch," Grafil said. "I feel sick. My head is aching, my stomach is aching." 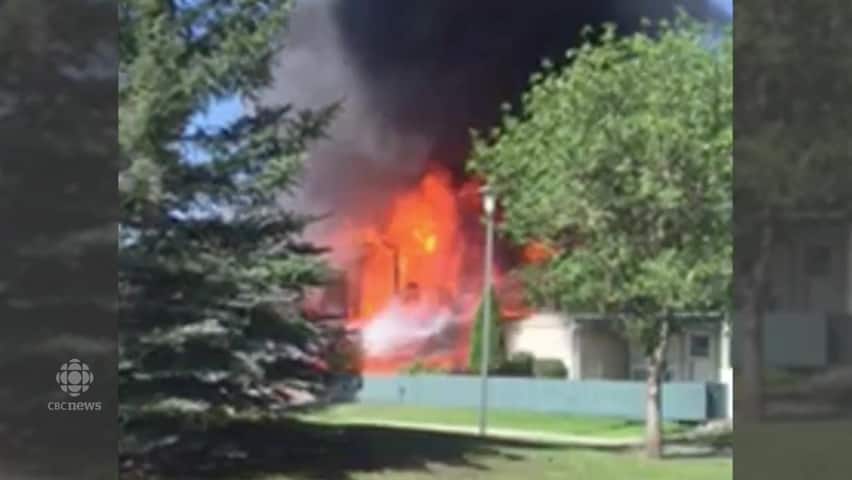 4 years ago
0:32
Firefighters were called to this two-storey condo building engulfed in flames on Friday morning. 0:32

By early afternoon the fire had been brought under control. Firefighters were still on scene checking for hot spots.An investigation could take hours or days, MacDonald said.

Charlie Julian had just left the building when he heard "a big bang" and saw smoke. Flames were coming out of one suite on the building's upper floor in what looked to him like a possible gas explosion.

Julian parked his car and started knocking on doors to alert other residents. "I'm not scared when it comes to other people's lives," he said. "Let's get 'em, let's save 'em. To hell with the fire, that's my motto. If you're in there, I want you out."

Debra Reynar, who lives next door to the building that was burning, said she saw "huge black smoke" and "flames flying at least 50 feet in the air."

A man and his two sons who live across the street ran to make sure everybody in the building got out, Reynar said. They also pulled out propane tanks "just in case," she said.

"They probably saved some lives," she said.

Catherine Kim saw a large plume of black smoke when she was driving her son back from swimming lessons.

"There were some flames initially but now it's really just smoky and they seem to have gotten the fire under control," she said.