Alberta woman could ‘starve to death’ after complications 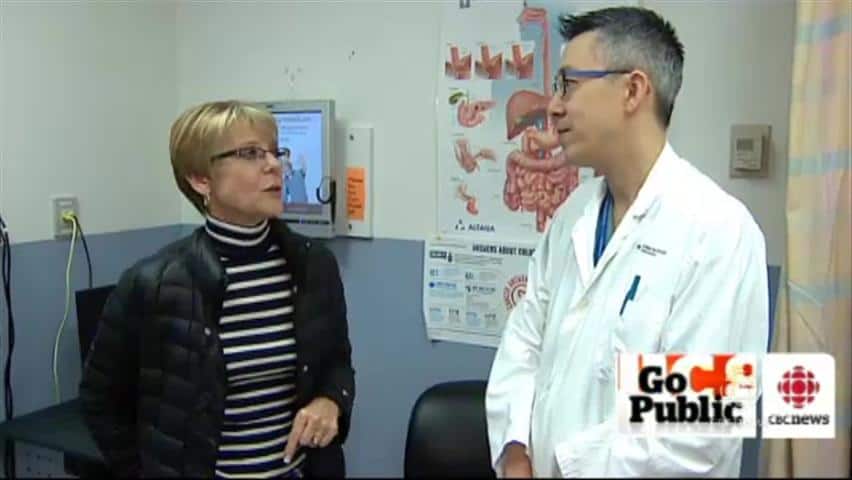 We’re actually worried she could almost ... starve to death, because she can’t get enough nutrients through - Dr. Clarence Wong, surgeon

“It’s an ongoing challenge,” said Dr. Daniel Birch, medical director of the Centre for the Advancement of Minimally Invasive Surgery at the Royal Alexandra Hospital in Edmonton and an associate professor at the University of Alberta.

“I suspect this will increase and increase dramatically.”

Birch says no one knows how many Canadians are travelling to Mexico for weight-loss surgery, but he estimates the cost to the Alberta health system of addressing complications to be in the millions.

Birch wants an official health advisory to warn Canadians about the potential risks of stomach surgery, which is being touted by an increasing number of medical tourism agencies.

“There isn’t enough information out there; there aren’t enough warnings about the significance of these procedures,“ he said.

“We’ve seen patients really suffer and struggle, spend a lot of money and in some cases spend years trying to get better. And not everyone does.”

Patient fighting to survive Connie Kempton, 57, a successful real-estate agent in Lloydminster, Alta., is one of more than 60 people being treated at the Royal Alexandra Hospital for complications from weight-loss stomach surgery, many of which were performed in Mexico.

In 2011, she weighed 192 pounds but says she led an active life, golfing regularly, running five kilometres up to three times a week, and working up to 18 hours a day. Nevertheless, she was unhappy with how much she weighed.

“In my mind I believed I was really, really heavy,” she said.

She thought weight-loss surgery would improve her life.

“I wanted to be healthier and live longer for my grand-kids,” she said.

“I thought I was going to be thinner and healthier. I wanted to run a 20-kilometre race … but I was too heavy.”

Now she gets tired if she walks a couple of blocks.

According to her doctor, what remains of Kempton’s stomach is partly blocked by scar tissue and she struggles to swallow the smallest amounts of liquid and soft foods.

She says she has lost almost 80 pounds, and risks losing even more.

Kempton says she paid $10,500 for the surgery to Beat the Odds Permanent Weight Loss Solutions (BTO), also of Lloydminster.

Along with other BTO customers, she travelled to Guadalajara, Mexico, for a surgery known as vertical sleeve gastrectomy (VSG).

The surgery involves removing about three-quarters of the stomach, leaving the patient with a banana-shaped remnant that is inflexible and fills quickly.

Kempton said after the surgery, while other patients on the trip were up and around quickly, she continued to experience pain, despite a follow-up operation.

She said both the Mexican surgeon and the tour organizer were making plans to leave and that she felt frightened and alone.

“I was scared and I wanted to go home,” she recalled.

Her husband flew to Guadalajara and together they flew back to Edmonton.

But on the three-hour drive to Lloydminster, Kempton says her condition deteriorated and she began experiencing severe pain and difficulty breathing.

“I knew within an hour something was terribly wrong,” she said.

Kempton went to the local hospital, but was quickly rushed back to the Royal Alexandra Hospital where she spent the next two-and-a-half months undergoing further surgery.

“At every step she was at risk of dying,” Wong said. “On the flight back … when she landed … and certainly the last place I would want someone with surgical complications is on a road driving back hours between cities.”

“We’re actually worried she could almost in some terms starve to death, because she can’t get enough nutrients through,” Wong said.

Kempton said she is now incapable of drinking a glass of water and spends the first hour of her day slowly working her way through a couple of tablespoons of cereal or half a small lunch yogurt.

Beat the Odds is one of several medical tourism agencies that have opened in the past three to five years, arranging surgeries in Mexico amidst what’s been called an epidemic of obesity in Canada.

On its website it promises competitive pricing, expert surgeons and post-surgical support.

Company owner Pamela Reiland says she lost 50 pounds after her VSG surgery, and her daughter, Leslie Leach, who runs the BTO office, claims to have lost 90 pounds after VSG.

The company offers a team of “patient facilitators,” other women who have had the surgery in Mexico.

Kempton is suing Beat the Odds, alleging her surgery was done improperly, and that BTO staff have no training to evaluate either the quality of the medical services or whether Kempton was a suitable candidate for surgery.

In its statement of defence the company denies the allegations, which have not been proven in court, saying it never represented its employees as medical experts only as being responsible for the logistics of scheduling surgery.

In a separate statement emailed to Go Public, Reiland said, “Kempton’s complications were a very isolated incident and were mostly escalated because she refused to follow the Doctors (sic) recommendations.” (to remain in Mexico for a further two to three weeks to recover.)

Reiland said BTO has “guided hundreds of people through the process” and encouraged people to “go to the BTO Facebook page or website to see many of the happy client’s (sic) testimonies and accomplishments.”

Reiland said all clients, including Kempton, are informed about the procedure and the risks, and are required to sign a consent form at the office and at the hospital in Mexico.

Birch and Wong said relying on testimonials from satisfied customers is not the same as an assessment from a team of medical professionals, including a surgeon, psychologist and dietitian.

Wong said that even without complications, stomach surgery is life-altering.

“When they have this surgery they aren’t told that this may drastically alter forever and ever how you’re potentially going to eat,“ he said.

Birch said medical tourism agencies should be regulated in line with Canadian health-care standards of practice for assessment, followup and informed consent.

Meanwhile, Kempton said stepping on the scale and dreading what it says is the one constant experience she has had before and after her surgery.

Despite her struggle to eat and keep her weight stable, Kempton is optimistic.