Alberta's medical students are calling on the province to create youth mental health programs and fund them with tax revenue from cannabis sales.

Alberta's medical students are calling on the province to create youth mental health programs and fund them with tax revenue from cannabis sales.

The medical students are worried about the impact cannabis legalization will have on people between the ages 15 and 25 after it becomes legal in Canada on July 1, 2018.

They're hoping the government will establish a cannabis youth mental health and addictions fund from cannabis sales.

"This is really important for us because we recognize that some of the evidence on cannabis and its effects is unclear," said Howie Wu, co-ordinator for the group. "We recognize that youth are a group that are disproportionately affected by cannabis as well." 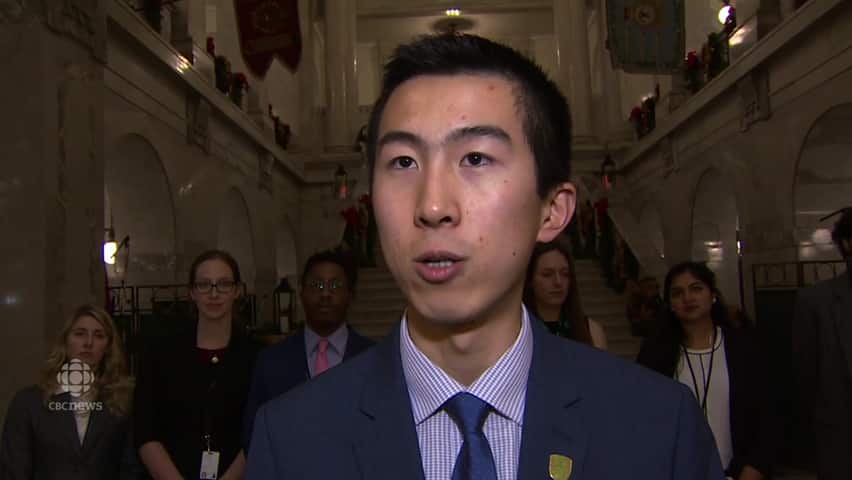 3 years agoVideo
0:44
Howie Wu and other medical students from University of Alberta and University of Calgary called on Alberta MLAs to create a youth mental health and addictions fund using revenue from cannabis sales. 0:44

Wu, who is studying at the U of A, said studies have shown a person's brain doesn't stop developing until age 25 — and with Alberta's legal age set at 18, that discrepancy is what the medical students want to focus on.

"We know the brain is still developing and growing and we know cannabis use in and around that time can lead to increases in psychiatric issues and mental health problems," added Adom Bondzi-Simpson with the Calgary Medical Students Association.

The students met with MLAs all day Monday. Their plans included a meeting with Health Minister Sarah Hoffman.

"We're hoping for at least a pledge from the government. We know some other provinces in this country — and other jurisdictions that have legalized marijuana — have taken … this public health approach," Bondzi-Simpson said.

Wu cited New Brunswick and Quebec as provinces that have funds set aside for education and treatment for young people.

Wu said the meetings had been good and that many MLAs are receptive to the idea. But there has been some pushback from NDP MLAs who said the cost of legislation and education in municipalities might not leave enough room for allocation of the tax revenue to the type of fund they want.

He said if money is tight in the early days of legal cannabis, the government could add to the fund later.

"As medical students, we've identified youth as one population that's very important to protect," Wu said. "We believe that a mental health and addictions fund will be able to do that."

With files from Jennifer Lee and John Gibson