Long before northeast Edmonton was a sleepy suburb, it was a bustling mining town - and according to historian Shirley Lowe - the area is still riddled with long-forgotten mining tunnels. 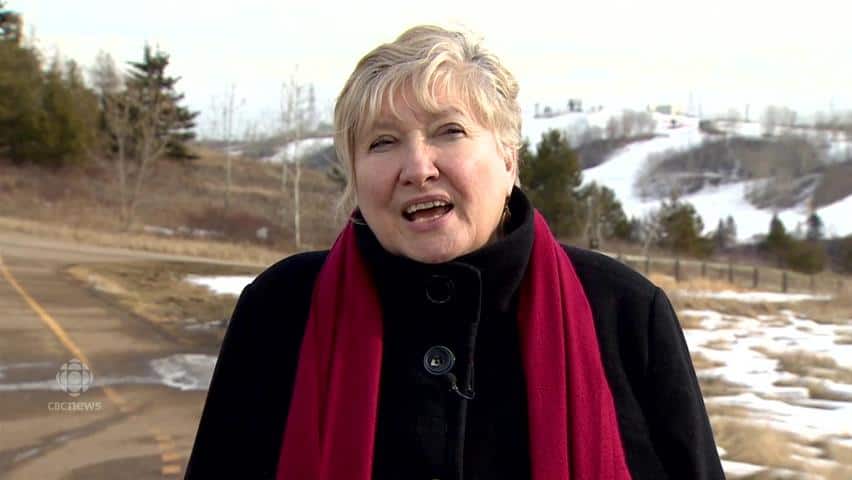 Shirley Lowe describes the history of coal mining in Edmonton

5 years ago
2:24
After the recent discovery of a coal mine under the site of a school site, the former historian laureate explains where the city's coal mines existed. 2:24

Long before northeast Edmonton was a sprawling suburb, it was a bustling mining town — and according to historian Shirley Lowe — the area is still riddled with long-forgotten mining tunnels.

"Our electrical system ran on coal, our street cars ran on coal. It heated our homes and fuelled our trains, so it was really handy to be sitting on that resource. We're still sitting on big seams of coal."

Underneath downtown Edmonton, and east through Beverly, lies a network of collapsed coal mine tunnels; remnants of a booming industry that existed from the 1880s to the 1940s.

One of the historic remnants was recently unearthed beneath the Rundle neighbourhood. Construction on the Ivor Dent School was halted this month, after a site inspection revealed that  a 111-year-old coal mine may be buried 30 metres below the surface.

Lowe said more of the hidden passageways will be brought to light, as new development spreads eastward through the city's oldest neighbourhoods.

"The caution would be, look for them," Lowe said during a Friday morning interview on Edmonton AM.

But not all of them are marked.

Mining companies, keen to cash in on the coal boom, often failed to follow the rules, and many underground tunnels were never documented.

"One company reported seven drift mines, but then they actually found 21."

A failure to fully document the mines has been a problem for Edmonton developers for decades.

Lowe pointed to the failed construction of Edmonton's College Avenue School, built in In 1895 on what is now MacDonald Drive. The brick school was unwittingly built on top of an abandoned mining tunnel.

"It slowly sunk into the mine tunnel and they used the school until it was gone," said Lowe.

"You think you would learn from that, and I don't think you build anything in Edmonton now without soil testing."

What lies beneath Beverly

Lowe has been collaborating with the Old Towne Beverly Historical Society and the city, to map out some of the major mines in Beverly, and mark them with commemorative plaques, detailing the area's rich mining history.

The Humberstone Mine in the Rundle Park area, the Davidson Mine near Ada Blvd. and 36 Street and the Beverly Coal Mine buried beneath Jubilee Park on 121st Avenue have all been earmarked for the project.

After months of research, Lowe said the plaques will be erected this spring.

According to Lowe, the area became an established mining town after the flood of 1899. Before then, most of the region's mining operations were concentrated near the North Saskatchewan River, where workers could tunnel their way through the soft soil of the river bank with relative ease.

"The flood basically filled them up and destroyed a lot of the drift mines in central Edmonton," said Lowe

"So a man by the name of William Humberstone gave up on his downtown mine and went off to what would become Beverly. He basically started that community, and he would go on to employ 200 people. It was a big deal."

According to the city, more than 50 mines were recorded as operating in Beverly between 1900 and 1950, but the actual number is likely much higher.