After months of speculation about his political future, Stephen Mandel announced that he still hasn't decided whether he will run for a fourth term as Edmonton mayor 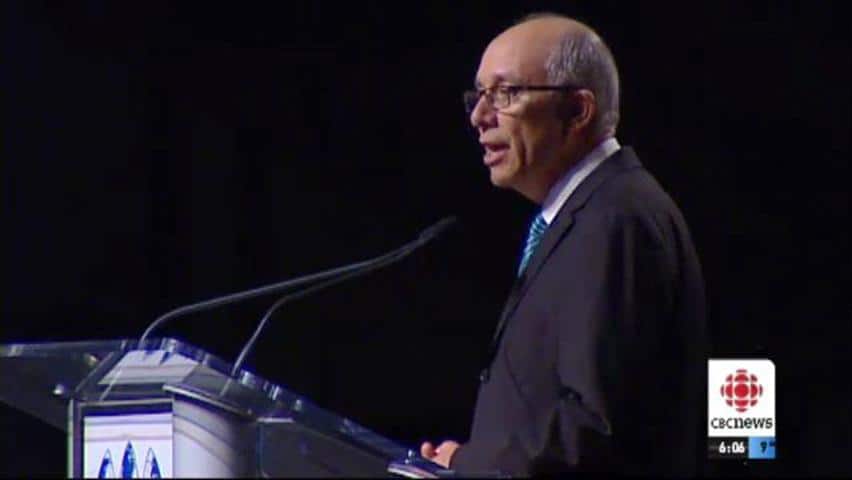 8 years agoVideo
3:54
Edmonton's mayor fails to live up to his promise to announce his candidacy 3:54

Edmonton Mayor Stephen Mandel said he can't yet decide whether he will make a fourth run at the mayor's chair this fall.

"I cannot, in good conscience, tell you what my intentions are today," Mandel told the 2,000 people who attended his annual state of the city speech at the Shaw Conference Centre.

"Answering this question means determining whether a job feels finished — whether the things I promised to do, sit comfortably in the 'done' pile."

Mandel said he began having second thoughts about retiring when the province cut funding for universities and when neighbouring municipalities balked at the city's annexation plans.

Now, he said, these key issues remain unsettled in his mind.

He said he fears the Redford government is taking the city back a decade to the "good enough" years when Edmonton was happy to be a second-tier city, not a thriving capital.

"I worry this money-seeking exercise won't understand the importance of independence to the integrity and legitimacy of our schools," he said.

"No budget woes — no matter how significant — can justify this."

He's also worried that the city's neighbouring municipalities are returning to the years of "myopic self-interest" as the city looks to expand its borders.

The province must "re-engage" in the capital region and help coordinate growth, he said.

"Definitely a frustrated mayor, there's no doubt about it." he told CBC News. "The essence of the speech is that if everybody made the tough decisions and became a leader, my job would be easier."

Lukaszuk, who attended the speech, said he believes the mayor's anger comes from the province's refusal to provide $100 million for a new downtown arena.

"Let's call a spade a spade," he said. "As much as it frustrates the mayor, that is a decision unfortunately he will have to live with.

"That definitely clouded his point of view on the relationship (with the province) which otherwise has been very positive."

Mandel's speech was widely anticipated after he said in early February that he would reveal his decision on April 2.

But during his speech he invited others interested in contesting the mayor's chair to make up their own minds.

Several councillors expected to enter the mayoral race though refused to commit to the race.

Several councillors including Don Iveson, Amarjeet Sohi and Karen Lebovici said they will not run against Mandel.

"I'm not going to make any decision until Mayor Mandel and we have time," Sohi said. "The election is not until October."

"There's no need on his part to rush and I respect that," Coun. Kerry Diotte said.

One political expert warned the mayor's waffling may backfire.

"He set the stage well," said University of Alberta political scientist Jim Lightbody. "He had an audience that was receptive and he let them down.

"He put the pin in the balloon," he said. "This was not a wise political move.

Mandel was first elected mayor in 2004, defeating incumbent Bill Smith, who was seeking his fourth term in office.

The mayor is now 67 and some speculate that he may not want to be in office until he is 71.

In a year-end interview last December, Mandel said that he needed to consult with his wife Lynn about what he should do.

"I think there's a lot of factors. What I want to accomplish if I run again, what I haven't accomplished, what I'd like to accomplish, my family," he said.

Mandel has 'made enemies'

But some observers believe Mandel should let this term be his last.

Lightbody said Mandel was able to unite council behind projects like development of the City Centre Airport lands and extension of the LRT.

"I  think it is in the construction of the LRT that he was the guy who led council to get that puppy out of the ground and onto the surface." he said. "That is a remarkable achievement."

However, Lightbody said it would be unwise for Mandel to run again, because he’s made enemies after nearly nine years in office.

"There grows a confederation of grievances against the mayor and Mayor Mandel should remember that that's partly why he defeated Mayor Smith in 2004."

If Mandel is elected to a fourth term, he would become Edmonton’s longest serving mayor, surpassing the 11-year record set by William Hawrelak.

With files from the CBC's Lydia Neufeld and Scott Fralick