A Cree-Metis artist in Edmonton is inviting people to walk through her new three-dimensional art installation that honours missing and murdered Indigenous women.

‘I could very easily have been one of these women,’ artist says 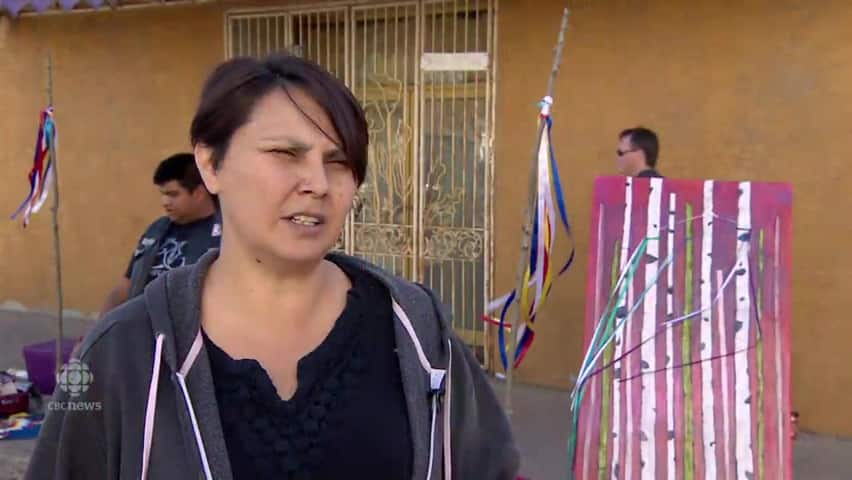 4 years agoVideo
1:24
Dawn Marie Marchand, a Cree-Metis artist created a three-dimensional tribute to missing and murdered Indigenous women that visitors can walk through. . 1:24

An Edmonton artist has created a personal tribute to missing and murdered Indigenous women that, for a few hours Friday, people can actually walk through.

The work by Dawn Marie Marchand is based on one of her paintings called "Prayers for my Sisters," and is open to everyone until around 6 p.m. Friday, at 101A Avenue and 96th Street

"I've had my own personal life touched by violence. I could very easily have been one of these women," said Marchand, who is a Cree-Metis mixed-media artist and the first ever Indigenous artist in residence for the City of Edmonton.

Marchand said the issue of the nearly 1,200 cases of missing and murdered women the RCMP have documented between 1980 and 2012 is one that's close to her heart and one that has affected many friends and family.

She hopes when people walk through the installation they stop to remember all of the women.

"Sometimes people get lost in some of the ideas about who the women are that end up murdered and missing," said  Marchand.

The victims were not only people who lived high risk lifestyles, but also some of the brightest from Indigenous communities around the country, she said.

The installation includes 12 birch sticks, each with ribbons, marking the Cree colours of Treaty 6 territory.

Bryce Littlechild from Maskwacis is one of several people who helped Marchand bring her work to life.

He lent a hand in part because he looks up to her as an artist, but also because the issue is easy for some to turn a blind eye to.

"To them, it's just another woman on the street or a prostitute. No. She was a child at one point. She has memories. She has a family and friends. She's a mother or a sister or a grandmother," Littlechild said.

Marchand's three-dimensional "Prayers for my Sisters" is directly on the avenue in the road where people would normally park. One of about 10 installations on 101A Avenue on what's known as "Parking Day".

It's an event supported by the City of Edmonton's CityLab, a department that looks for new ways of using public spaces.

"We have a lot of parking and parking is valuable, but it's also nice to see we can use some of that public space in a different way," said Marco Melfi, a CityLab planner.

It's an event Marchand is proud to be part of and hopes will help Edmontonians feel the love inside all the missing and murdered women in Canada.

"A woman's heart is a soft place and when we put this together we're going to allow people to walk into that space of softness that women create," she said.

The commission's interim report into missing and murdered Indigenous women is due before Nov. 1, 2017, with the final report a year later.