Larry Langley remembered as 'somebody to emulate'

A prized personality, a prized communicator and a prized person. That’s how Rev. Antony Fernando described former city councillor and longtime CBC broadcaster Larry Langley, who died on Jan. 10 at the age of 83. 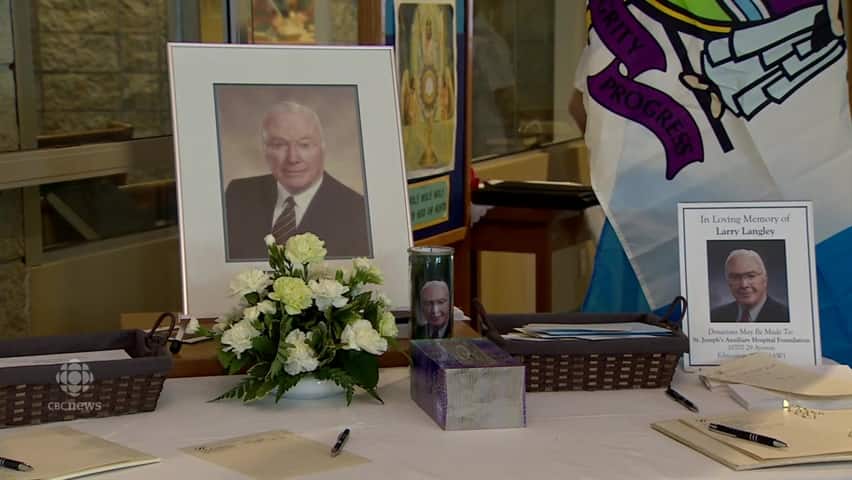 'He liked to see you do well'

That's how Rev. Antony Fernando described former city councillor and longtime CBC broadcaster Larry Langley, who died on Jan. 10 at the age of 83.

Langley was born in Saskatoon, Sask. and first worked as a teacher before beginning his broadcasting career in 1956. He moved to Edmonton in 1965 to continue his career with CBC Edmonton.

Ron Smith, a former CBC broadcaster himself, said Langley was a jack of all trades.

"He did everything well," he told CBC News. "He could host a show, he could read the news, he could interview and he became the weatherman."

Smith said being the weatherman was what Langley was most known for. And similar to many broadcasters, he had his own catchphrase. "Fresh was a word he always used," Smith said. "When it was really cold, he'd say, 'Man, that's fresh!' "

"He was in a business where … a lot of egos were involved," he said. "He never had that ego."

Langley worked in radio and television for CBC Edmonton for 28 years before retiring in 1993.

But just because he retired didn't mean he was ready to quit serving his community. Langley ran successfully for Edmonton city council two years later, and served for nine years.

Bill Smith was the mayor of Edmonton during Langley's entire tenure. He said Langley was "the calming voice on council," always the voice of reason.

Smith recalled when Edmonton was at risk of losing the Oilers in 1995. He said the decision came down to a city council vote.

"The vote was only 7-6 to keep them (Oilers) here. And look what we have now," Smith said. "Larry worked hard getting the six votes that were needed.

"So I think back of Larry when I walk past Rogers Place, and think what could have not been, I think of Larry Langley."

After his retirement from city council in 2004, Langley continued to sit on various city boards.

Ron Smith said Langley was one of the most respected and respectful people he's known — and that carried on all throughout his life.

"He was just somebody to kind of emulate yourself after."

Langley is survived by his wife, four children and seven grandchildren.

With files from Lydia Neufeld