​A state of emergency in Lamont was declared Monday, after the region was flooded with spring melt.

'The flooding that we've seen here – ​just in volume –​ is more than we've ever seen,' says spokesperson

A state of emergency in Lamont County was declared Monday after several rural roads were flooded due to spring melt.

The flooding in the area is unprecedented, according to Heather Atkinson, communications coordinator for Lamont.

"It's probably the most flooding we've seen in almost 30 years," she said. "There's a lot of people that are caught off guard." 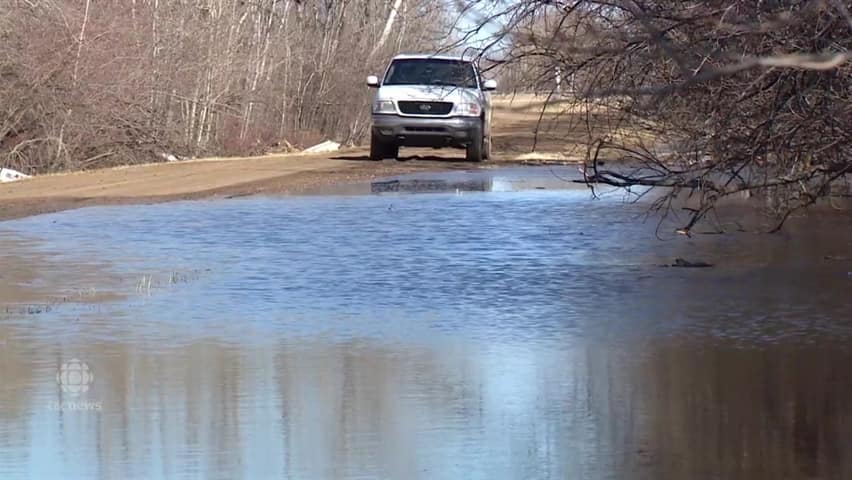 'The most flooding in almost 30 years'

Prior to Monday's flooding, the region last saw huge volumes of water on county roads back in 1997 when 127 culverts were flooded.

"The flooding that we've seen here – ​just in volume –​ is more than we've ever seen before," she said, adding the water on the roads in some places was four feet deep.

Out of the county's 3,800 residents, six families have been hardest hit, according to county officials. There were reports of flooded basements, but not enough to force anyone out of their homes, Atkinson said.

Elk Island Public Schools cancelled close to 20 buses to the county Monday due to the flooding.

As the melt is expected to continue this week, the county won't be able to pinpoint where the danger lies.

One of the biggest hazards is when water flows through the ditch and erodes lower layers of the roads, which then destabilizes the road structure.

"It may look safe on top, but if somebody drives over it, then the road could collapse, and that's why they've been closed," she said.

Atkinson advises people to avoid travelling on county roads until it is safe to do so. If that's not possible, she advises to use extreme caution and to keep vehicle speeds below 40 km/h.

"We have so many roads that have to be blocked, we ran out of barriers," she said, adding that they've resorted to using caution tape or creating unconventional barriers with bushes or sticks.

Those who are forced to stay in their homes because of flooding on nearby roads have been contacted and are prepared to "hunker down," Atkinson said. If they need to move, the county will offer assistance, she added.

Public Works crew members are fixing the roads affected by the flooding so people can access them, Atkinson said.

"It's the best we can do right now," she said. "We have to wait for Mother Nature to ease off a little bit."

Atkinson said the flooding is a result of a perfect storm caused by Mother Nature.

"Long winter with a frozen ground, and then a really quick thaw," she said. "So the ground hasn't thawed yet, so there's no place for the water to go when the snow melts."

Lamont County was one of several regions in the province that declared a state of emergency Monday.

There is no timeframe as to how long the state of emergency will last, Atkinson said. Right now, the county is watching the weather and the melt.

Lamont County warns drivers to stay off roads like these. <a href="https://t.co/oY3DRBRMpZ">pic.twitter.com/oY3DRBRMpZ</a>