Despite low supply of COVID-19 vaccine, Alberta’s immunization rollout has crept forward, reaching elders in at least one northern First Nation on Monday.

Alberta has administered 120,357 doses of the COVID-19 vaccine 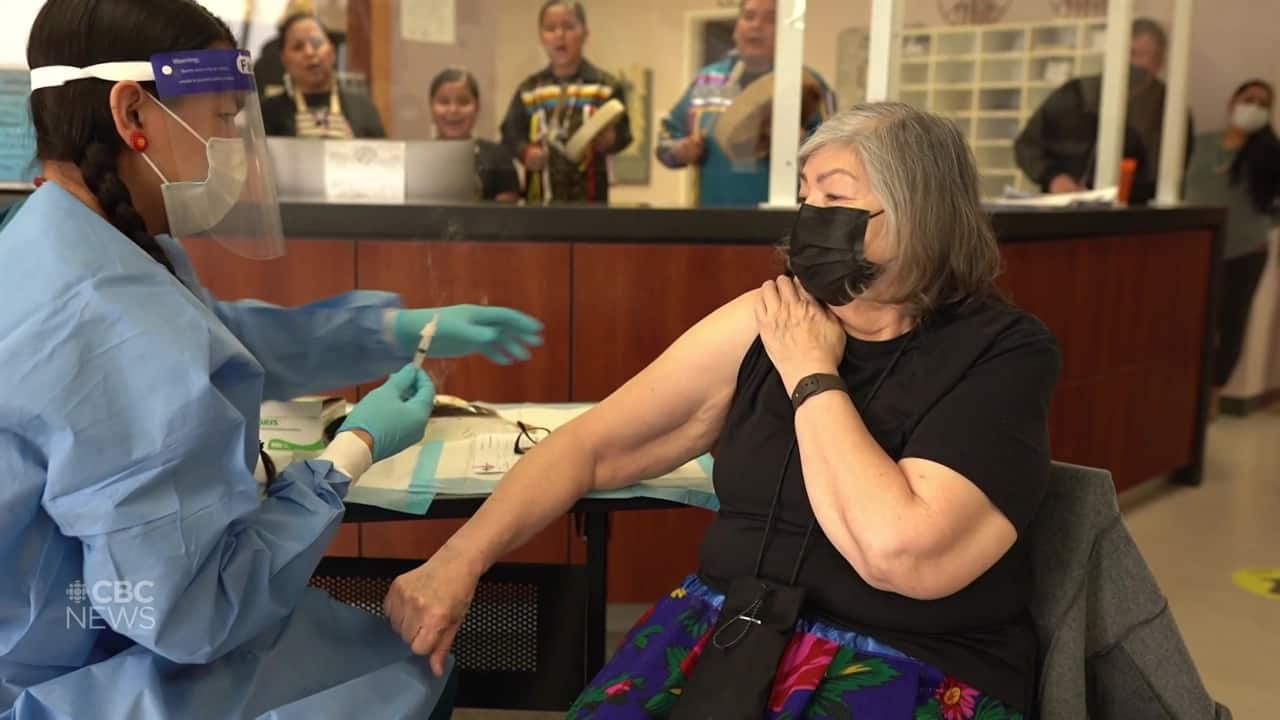 Kehewin Cree Nation received 100 doses of Moderna, and marked the beginning of its distribution with a ceremony Monday that centred on the nation's oldest members.

"Everyone is happy, this is a landmark moment," said Dr. James Makokis, a family doctor for the community.

After smudging and a prayer, the doctor administered the first dose to his aunt, elder Leona Makokis, while an honour song was performed behind them.

"It's such a relief as a younger person in the nation to have our elders protected, because we want them to be with us a long time," he said. "And it's actually realizing the vision and intent of our treaty promise to health by accessing and using the vaccine."

Leona Makokis, 75, said getting the shot was an honour and a "great relief." The past year has been full of grief and challenge for their community as they lost elders and were unable to gather and comfort each other, she said, and receiving the first shot felt like crossing a boundary and inviting others to follow.

"I think modelling is very important, to be able to do that — people will feel safe as well, to join me on that path," she said.

"That's our role as grandmas and women, to ensure that that keeps going," she said. "Our responsibility is to ensure that we provide that life force to all these little ones coming up."

Elder Arlene Dion also got the vaccine Monday. Dion, 72, said getting immunized felt like a first step back to all the things she has missed during the pandemic.

"It felt like it was opening up the gates of freedom," she said, struggling to hold back tears. Her husband of 50 years is in long-term care. Her visits with him have been limited, and she misses him. She said the restrictions have been incredibly hard on all the nation's elders who live in long-term care.

She also misses her grandchildren, who ask why they can't see her, and said a program she runs to support single mothers and their children has been unable to do most of its normal activities. She knows that she will still need to follow public health measures, but the vaccine is a first step.

"This is so amazing today, to have the chance to start something new," she said.

Province still on Phase 1A

First Nations and Métis people over 65 are included in Phase 1B of Alberta's vaccine rollout plan, along with all seniors 75 years of age and older.

Alberta Health spokesperson Tom McMillan said Monday the province is still working to immunize all groups in Phase 1A, long-term care and designated supportive living residents, and certain priority health-care workers. But the province has been working with the federal government to offer the vaccine to First Nations when possible.

Though supply shortages have meant rollout has slowed in Alberta and across Canada, immunization is still happening

As of Sunday, 120,357 doses of vaccine had been administered across the province, including 28,991 people who were fully immunized with two doses, McMillan said.

Most first doses are done for the two Phase 1A groups, but many are still waiting on their second dose:

Because of the shortage, McMillan said, further first doses for health-care workers have been postponed in favour of administering second doses.

"We hope to resume first doses for all eligible health care workers and move on to Phase 1B as soon as possible," he said. "The exact timing will depend on the amount of vaccine that arrives in the weeks ahead."