A six-year-old boy in Mannville, Alta., is limited in where he can go and what he can eat as part of his parents' efforts to protect him from things that trigger painful reactions.

6-year-old Kaiel Morritt is limited in where he can go, what he can eat 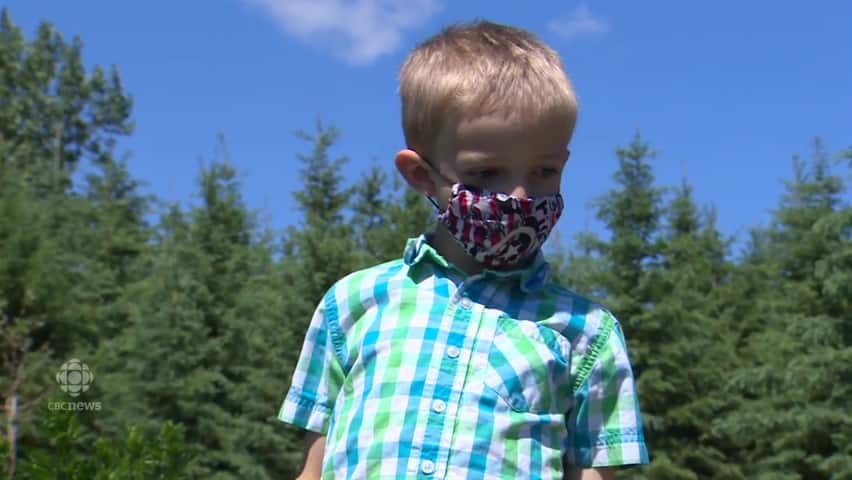 'They would make my tummy hurt'

3 years ago
1:40
The parents of a six-year-old Mannville boy use rural garden to prevent flareups of rare condition. 1:40

A six-year-old boy in Mannville, Alta., is limited in where he can go and what he can eat as part of his parents' efforts to protect him from things that trigger painful reactions.

While wearing a filtered mask, Kaiel Morritt walks through his family's rural garden. He eats a strawberry, smiles, and gives a thumbs-up. The mask is to protect him from colds, flu and scents.

He eats freely in the garden. His parents concluded that foods from the grocery store were causing internal pain.

Since he was a year old, he has experienced painful reactions to many things and a susceptibility to common colds and the flu. The reactions include abdominal pain, coughing, rashes and diarrhea. His parents refer to his condition as "allergic to life."

"He reacts to almost everything in the environment: strong scents, cold [temperatures], bug bites, colds, medications," said Kim Morritt, Kaiel's mother. "He has all kinds of different reactions to them."

To control his exposure to the things that trigger reactions, his parents limit him to the rural garden, their home and his mother's office in Mannville.

"No one else is allowed to go in those places so that he stays safe," she said. "He can touch whatever. He doesn't have to wear his mask or gloves when he's there, and then out here. Those are the only three places that Kaiel exists in this world. And doctor's offices. We go there quite a bit."

A referral letter from a pediatrician shared with CBC News confirms his physical reactions and adds that he suffers from "low muscle tone, delays in gross motor, fine motor and speech/language skills." It states his condition is undiagnosed because of a broad range of signs and symptoms and the testing needed may require hospitalization. The pediatrician cites a rare condition called idiopathic mast cell activation syndrome as a possible cause.

Kaiel's parents have taken him to nine doctors in Edmonton. None have been able to offer a conclusive diagnosis.

A diagnosis could also help the family get a full time aide to help with physical therapy and occupational therapy.

"Insurance companies won't cover expensive medications that aren't on an approved list without a diagnosis," she said. "We can't get him support in school without that diagnosis. If we had a diagnosis, his world would open up in terms of aid and support we could get for him."

Kaiel's condition has changed the way his sisters live as well. To prevent the amount of germs they bring home with them, they don't attend public school.

Harvesting for the winter

Since Kaiel only eats food produced at home, the foods grown in the garden and chicken coop are harvested and frozen for his diet during the winter months.

"When he's out here eating fresh lettuce and strawberries and all of that stuff, he's so healthy, compared to winter, when he's laying in bed the whole winter because he doesn't have that fresh food to eat. We're hoping a greenhouse will help him be more of a normal child through winter as well as summer."

The family wants to build a greenhouse to produce vegetables for their son year-round. They received a donation of plans for a greenhouse from Colorado-based Ceres Greenhouse Solutions, but it could be years until the family builds it.