'If [Trudeau] wants to shut down Alberta's oilsands ... he'll have to go through me,' says Wildrose leader 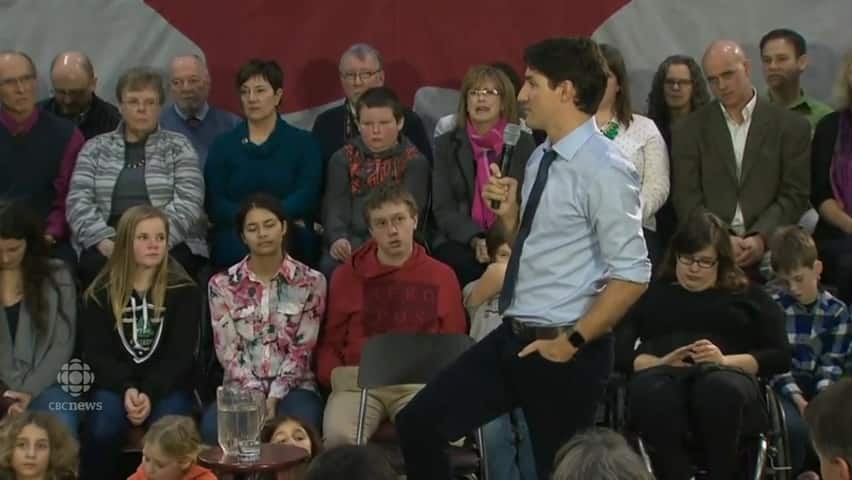 4 years ago
0:58
Prime Minister Justin Trudeau answers a question about Canadian resources and speculates on the future of the oil sands 0:58

Prime Minister Justin Trudeau sparked immediate anger among Alberta politicians on Friday by suggesting Canada should "phase out" the oilsands.

Speaking at a town hall in Peterborough, Ont., Trudeau was asked about his government's approval of pipelines and his commitment to the environment.

"That is going to take time. And in the meantime, we have to manage that transition."

In Alberta, both the Wildrose Party and the Progressive Conservatives were quick to condemn the statement.

"I am sick and tired of people attacking our oilsands," Wildrose Leader Brian Jean told CBC. "I truly would suggest that Mr. Trudeau keep his comments to himself when he doesn't know what he's talking about.

Jean said the oilsands are an economic engine that powers both Alberta and Canada.

"The economic benefits of the oilsands are immeasurable," Jean, who represents Fort McMurray, said earlier in the day in a statement. "If Mr. Trudeau wants to shut down Alberta's oilsands, and my hometown, let him be warned: he'll have to go through me and four million Albertans first."

We certainly don't need out-of-touch, federal politicians sounding like Jane Fonda on this topic.- Brian Jean, leader of the Wildrose

In a tweet, PC leadership candidate Jason Kenney asked if Trudeau would rather "hand over all global oil production to Saudi [Arabia], Iran [and] Qatar.

"If we end 'dependence on fossil fuels,'" Kenney asked in another tweet, "how will Justin Trudeau fly to private Caribbean islands? Planes & helicopters fuelled by pixie dust?"

"We have to remember, this is coming from a prime minister who's just approved not one but two pipelines that are going to assist in our diversifying the markets to which we sell the product coming from the oilsands," Notley told CBC Radio's The House.

She cautioned Albertans not to get "too excited" about Trudeau's comments.

"At the end of the day, this is what I know to be true: the world market for oil is not going anywhere soon. So the job of Albertans, and the job of Canadians, is to make sure that that world market looks to the oilsands, as they should, as the first choice for where they get that product from."

Countries that depend on oil imports will have an incentive to buy Alberta oil because governments and companies here are proving they can work responsibly together to produce energy and at the same time reduce greenhouse-gas emissions to protect the environment, Notley said.

"And that's why people are going to come to the oilsands for a long time to come."

"He needs a political smack right now," McIver said of the prime minister. "Trudeau threw Alberta under the bus today, and premier Notley is sitting on her hands playing pattycake instead of attacking on behalf of Albertans."

The president of the Canadian Association of Petroleum Producers (CAPP) was diplomatic about the prime minister's comments. Tim McMillan wouldn't say whether he agreed with phasing out the oilsands, but said CAPP is looking for other ways to continue production.

"We want to de-couple the emissions from the energy," he told CBC. "I think that Canada has an opportunity to be an energy supplier for the world."

"In the current international economic climate, the industry does not need any more uncertainty about its future," Swann said in the second statement. "We need our prime minister to not only support this industry, the economic engine of the country, but to communicate that clearly. Given Justin Trudeau's recent pipeline approvals, I believe he should be given the benefit of the doubt and a chance to clarify his remarks."

In an emailed statement, Greenpeace strategist Keith Stewart said the transition to other energy sources is a global trend that Canada should follow. "Even Stephen Harper signed on to the G7 commitment to phase out fossil fuels, and the only real debate is how fast this will happen," he said.

By mid-afternoon, Trudeau's office had issued its own a statement.

"The prime minister — as he and previous prime ministers, including Stephen Harper, have been saying for a long time — was reiterating the need to move away from our dependency on fossil fuels and his commitment to growing the economy, all while protecting the environment.

"As a government, we were proud to work with provinces and territories to introduce a price on carbon pollution - to create jobs and protect the environment. We are also proud of our recent announcement which will ensure that we can move Canada's natural resources to international markets."

According to a 2014 study, Alberta's oilsands contributed $91 billion of Canada's gross domestic product (GDP) that year.